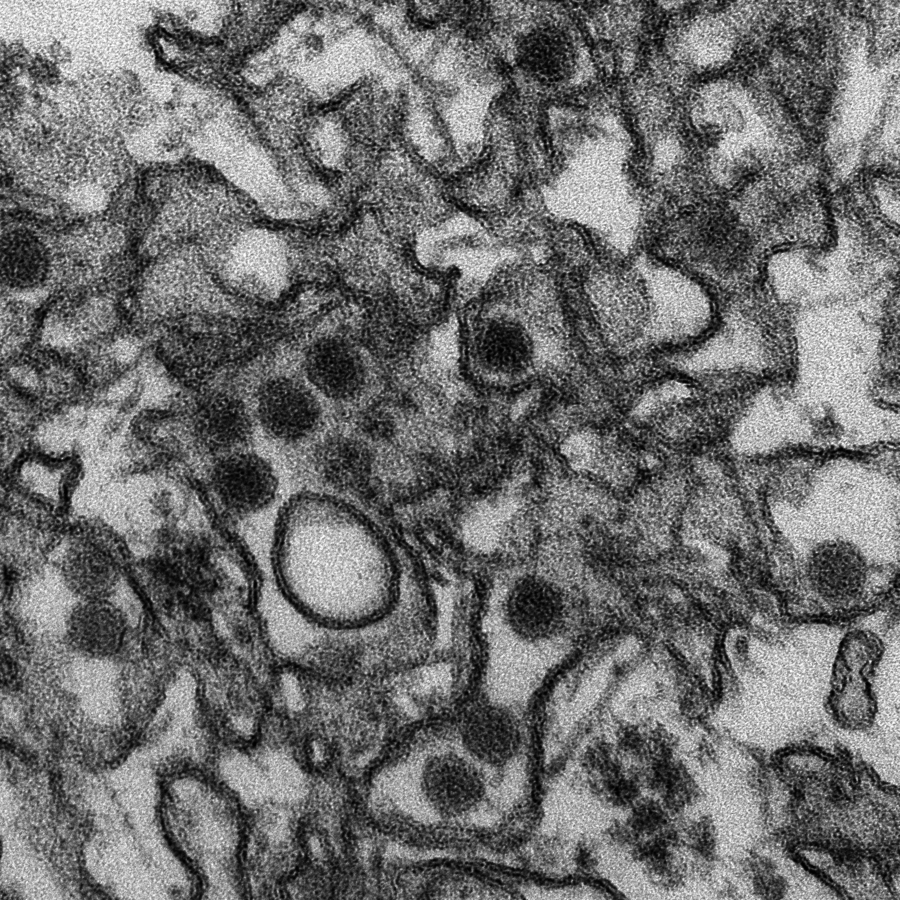 This is a transmission electron micrograph (TEM) of Zika virus, which is a member of the family Flaviviridae. Virus particles are 40 nm in diameter, with an outer envelope, and an inner dense core.
By CDC/ Cynthia Goldsmith, License: Public Domain

Definition of the Zika Virus

The Zika virus is a single-stranded DNA virus that belongs to the Flaviviridae family, the genus Flavivirus, which also includes dengue, yellow fever, West Nile, and Japanese encephalitis viruses. The viruses are considered arboviruses, which are transmitted by infected arthropod vectors (such as mosquitoes) when they feed on infected hosts; they carry the virus in their saliva and transmit it.

History of the Zika Virus

The story of Zika virus started in April 1947, when a group of scientists was observing the temperatures of rhesus monkeys as part of a study looking for a yellow fever virus in the Zika forest of Uganda near Lake Victoria. One of the rhesus monkeys (identified as Rhesus 766) developed mild pyrexia (39.7°C/103.4°F) and was kept under observation. A blood sample was taken from Rhesus 766 and injected intracerebrally into a group of mice. Signs of sickness began 10 days after injection, and the researchers isolated a filterable, transmissible agent from the brains of the mice.

In January 1948, researchers attempted to isolate the virus from Aedes africanus mosquitoes trapped in the Zika forest; they ground them up in a blood-saline solution and inoculated it subcutaneously into Rhesus 758, which developed a mild fever. The researchers isolated the same transmissible agent that had sickened Rhesus 766 and named it the Zika virus.

The first case identified a human infected with Zika virus was in Nigeria in 1954 during an epidemic of jaundice that was suspected to be yellow fever. A 10-year-old Nigerian girl developed fever and headache but no jaundice. Symptoms resolved spontaneously within 3 days. A sample of her blood was injected intracerebrally into a group of mice; they later developed signs of illness, and neutralization tests confirmed the presence of Zika virus.

From 1951 to 1981, human cases of Zika virus infection were reported across other African countries and parts of Southeast Asia.

From its discovery until 2007, only 14 people were diagnosed with Zika virus disease, in Africa and South Asia.

The first outbreak of Zika virus outside Africa and Asia was reported in 2007 in the Federated Republic of Micronesia, where 49 people were confirmed to have the disease.

In 2013, another outbreak occurred in French Polynesia, with 333 confirmed cases, and it was associated with an increased incidence of a serious neurological disease, Guillain-Barre Syndrome.

In 2015, a large outbreak of the virus was reported in Northeastern Brazil, and a few months later, clinicians started to notice an unusual increase in numbers of infants with microcephaly (small heads), which had been attributed to pregnant mothers infected with the Zika virus.

The virus started to spread from Brazil to much of South America, Central America, and the Caribbean. 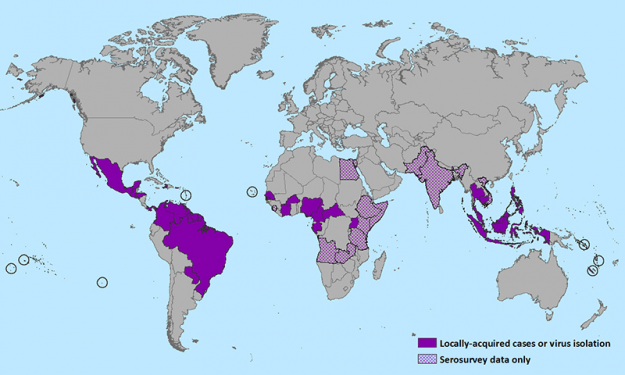 Image: Countries that have past or current evidence of the Zika virus transmission (as of January 2016). By CDC, License: Public Domain

Transmission of the Zika Virus

Zika virus is a mosquito-borne disease spread mainly by the Aedes genus (Aedes aegypti and Aedes albopictus). The virus has been spreading inside many African countries and outside to the Americas, mainly through infected mosquitoes biting healthy people. The mosquitoes are very active during the daytime but also bite people at night.

Zika virus causes only mild flu-like symptoms, which resolve spontaneously within days. Therefore, infected patients may not realize they have the Zika virus in their blood. Furthermore, an infected individual can be a source of infection to healthy mosquitoes.

In 2015, more than 3,500 cases of microcephaly were reported in Brazil after the large outbreak of Zika virus there, and the virus was isolated from the amniotic fluid of at least 2 pregnant women, suggesting a strong relationship between Zika virus and the microcephalic infants. It has been suggested that mothers infected with Zika virus can transmit the virus to their infants through during pregnancy or during delivery.

Note: There are still not enough studies about the effects of Zika virus on pregnancy.

Two cases of sexually transmitted Zika virus infections have been reported. It has been found that the virus lasts longer in semen than in blood.

Clinical Manifestations of the Zika Virus 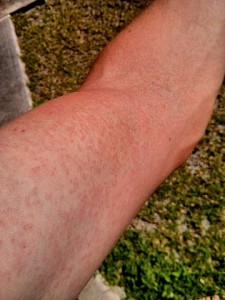 Zika virus can cause mild flu-like illness or even no symptoms. About 1 in 5 people infected with Zika virus will have non-specific symptoms, such as:

No incubation period has been identified. The virus usually lasts 3 days to 1 week and subsides spontaneously without treatment. Infected patients usually acquire lifelong immunity against the virus.

Clinicians should suspect Zika virus infection in any patient who presents with fever, rash, arthralgia, conjunctivitis, and headache, with a recent history of travel to an area endemic with Zika virus, especially pregnant mothers due to the risk of microcephaly.

The clinical manifestations of Zika virus disease are similar to dengue virus and Chikungunya disease, which also are transmitted by the same types of mosquitoes. Therefore, diagnosis can be confirmed only by a laboratory isolating Zika virus RNA from the blood or other body fluids, such as urine or saliva.

No vaccine has been established to protect against the Zika virus disease. The only effective preventive method is avoiding getting bitten by infected mosquitoes.

The Centers for Disease Control and Prevention (CDC) recommend the following to all individuals traveling to areas where Zika virus is endemic:

The CDC recommends that pregnant women postpone travel to areas endemic with the Zika virus due to the risk of delivering babies with microcephaly. Pregnant women who must travel to those areas should strictly apply the previously mentioned preventive methods and tell their health care providers about the travel.

Because sexual transmission of Zika virus disease has been reported, individuals traveling to endemic areas should abstain from sex or use condoms.

Individuals who already have Zika virus should avoid getting bitten by mosquitoes in the first week, as the virus exists in their blood and can be transmitted to other people.

During outbreaks of the Zika virus, authorities should spray insecticides to kill mosquitoes.

Zika virus causes a mild illness that resolves spontaneously within 3–7 days. There is no specific treatment for Zika virus infection, but symptoms can be treated as follows: