Definition and Pathogenesis of Diverticula

Diverticula are wall protrusions in hollow organs. A distinction must be made between ‘true’ and ‘false’ diverticula. It is crucial to learn the definitions and differences, as questions about diverticula, particularly Zenker’s diverticulum, usually appear in medical exams.

In the case of a true diverticulum, all the wall layers are affected, even the muscularis. The protrusion often occurs due to tension from outside as seen in scarring or inflammatory changes (e.g., tuberculosis or lymphadenitis).

For a false diverticulum (or pseudodiverticulum), only the mucosa and submucosa evert to the outside through a weak spot in the muscle layer. The reason for this is increased intraluminal pressure.

Concerning the esophagus, diverticula can be classified based on location and wall layer involvement.

Pulsion diverticula are false diverticula. Predilection sites include the following points on the esophagus that have weak/no muscle:

Large diverticula are accompanied by symptoms. Patients complain of dysphagia, retrosternal pain, feelings of pressure, and nightly regurgitation of undigested food residue. The latter is associated with risks of aspiration and pneumonia. The deposition of food residue in the diverticulum may lead to halitosis. Some patients describe a ‘gurgling’ sound when they drink. 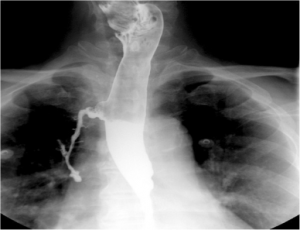 Esophageal bolus swallow test is the method of choice

The diagnostic method of choice for identifying diverticula is an esophageal bolus swallow test. X-ray images often clearly show the accumulation of contrast agents in protuberances, allowing the precise differentiation of diverticula according to their location. Traction diverticula usually feature ‘ear-like’ outgrowths, whereas pulsion diverticula are mainly sack-shaped.

Because of the possible presence of a perforation, it is recommended that healthcare professionals use a water-soluble contrast medium because barium predisposes to mediastinitis or peritonitis upon exit from the esophagus.

To exclude other possible causes of symptoms, endoscopy should be performed as well. However, care must be taken because the mucous membranes near diverticula are particularly prone to perforation.

Diverticula can be treated surgically. Surgery is usually indicated only for Zenker’s diverticula and is rarely used for epiphrenic diverticula.

Note: Traction and epiphrenic diverticula usually require no treatment. With Zenker’s diverticula, however, surgery is always indicated. The operation can be endoscopic or open. The diverticulum is resected, and myotomy of the cricopharyngeal muscle is performed to prevent recurrence. Mortality rates are very low, and the success rate is high (95%). Postoperative complications may include recurrent paresis, mediastinitis, neck abscess, and salivary fistula.