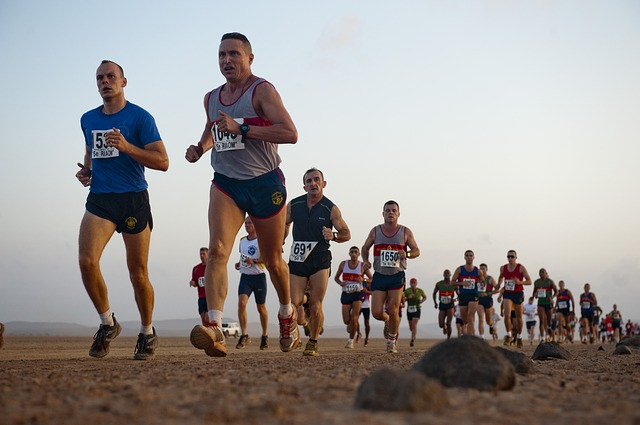 What are work and power in terms of physics? Work is the product of force and distance (F * s) and describes the energy that is used for a certain action. The unit of work is joule (J = N * m).

Power, on the other hand, includes the temporal dimension and is defined as work/time; the unit is watt (W = J/s).

Body delivering performance relies on a constant supply of energy, which is most of all needed in the muscles. Due to this, the human metabolism undergoes some distinct changes under physical strain.

Hormonally, the differences between the rest state and physical strain mainly emerge from an increased need for glucose and triglycerides. Therefore, increased levels of cortisol, glucagon, and catecholamines can be measured, while the insulin level is significantly lower.

Energy carriers and their provision

For the reliable contraction of muscles, the muscle cell relies on a constant provision of adenosine triphosphate (ATP), the energy carrier in the cell. However, the intracellular ATP in an active muscle is exhausted within a few seconds and has to be resynthesized.

Within the 1st 30 seconds, the muscle obtains its energy from creatine phosphate. The phosphate is transferred out of this complex onto adenosine diphosphate (ADP) in order to produce new ATP. If the strain continues, glucose is used as the next energy carrier. It primarily originates from the muscular glycogen, the storehouse of glucose. Initially, anaerobic glycolysis occurs, i.e. without the supply of oxygen and with the release of lactic acid (lactate).

After a few minutes, aerobic glycolysis begins with the use of oxygen. This process is significantly more efficient and can regenerate 36 molecules of ATP out of 1 molecule of glucose. If the circulatory system cannot supply the muscle sufficiently with oxygen, anaerobic glycolysis still occurs simultaneously. When the stored glycogen in the muscles and liver begins to run out, the body starts to utilize fats since they represent by far the greatest energy reservoir in the body.

In sports science, the endurance limit describes the maximum strain under which the body can perform an action without increased exhaustion of the muscles and while maintaining a stable equilibrium (steady state) of the respiratory and the cardiovascular system.

It is often defined as the physical strain that can be maintained over 8 hours without exhaustion. Above the endurance limit, the oxygen demand of the musculature exceeds its supply. Thus, energy production occurs in an anaerobic fashion and both heart rate and respiratory minute volume do not reach the stable plateau value referred to as ‘steady state’.

Lactate is produced as a metabolic product during anaerobic glycolysis and accumulates in the body in situations of very heavy strain without sufficient oxygen supply. At a blood concentration of roughly 4 mmol/L, the anaerobic threshold is reached. The endurance limit is probably exceeded at this concentration and the activity has to be stopped soon.

Lactate leads to a decreased pH value, and can in an extreme case when compensation mechanisms are exhausted, resulting in metabolic acidosis with hyperkalemia. After the activity has been terminated, the accumulated lactate can be transported to the liver, where it is used under oxygen supply as the base substance for gluconeogenesis. However, the anaerobic threshold is different in each human being since it depends on the fitness level.

Note: In contrast to what is frequently assumed, sore muscles are not the result of high concentrations of lactate in the muscle but of painful microtraumas of the muscle fibers.

Changes in the Respiratory System

At target turnover, the human body uses about 250 mL of oxygen per minute. Under physical strain, this need for oxygen obviously increases and the body responds to this sometimes 10-fold increase with increased respiratory minute volume. On one hand, this is reached by increased breathing rate, and on the other, by increased tidal volume. Additionally, the sympathetic nervous system mediates bronchodilation and improved diffusion capacity via increased circulation.

This adjustment occurs with a delay of roughly 2 minutes during which the energy demand is covered anaerobically, and it reaches a ‘steady state’ when strain is kept below the endurance limit. In situations of very heavy strain above the endurance limit, the oxygen demand cannot be covered sufficiently and no ‘steady state’ is reached, even if the accumulating lactate represents an additional respiratory drive due to the consequential decrease in pH.

In the long term, strain always has to be terminated at some point. Also, the body accumulates greater excess post-exercise oxygen consumption.

As mentioned before, the body covers a part of its increased need for energy in an anaerobic fashion at the beginning of strain until the oxygen intake is sufficiently increased. Thus, the increased level only subsides with a certain delay since the body has to compensate for the earlier oxygen deficit. This deficit is referred to as excess post-exercise oxygen consumption which can have different magnitudes depending on the degree of the strain.

This explains why athletes have an increased respiratory frequency even some time after the strain. This can be observed especially in athletes with heavy strains above the endurance limit, e.g. sprinters. Without the ability to breath in the ‘steady state’, the body accumulates greater and greater excess post-exercise oxygen consumption as not only the energy reserves have to be refilled but also accumulated lactate is metabolized which requires oxygen as well. Comparatively lower levels of ‘excess post-exercise oxygen consumption’ are seen in continuous aerobic activity performed below the endurance limit e.g., long-distance runners.

Changes in the Cardiovascular System

The oxygen intake in the lungs is of little use for the body if it is not reliably transported to the working muscles. Thus, the cardiovascular system has to react to the demands and increase circulation appropriately. The crucial changes are mediated via the activation of the sympathetic nervous system with the release of catecholamines from the adrenal medulla.

Adjustments in the vascular system

In order to increase circulation in the muscles up to 40 times compared to the resting state, heavy local vasodilation is needed.

This is done by using the byproducts of the active muscles in order to increase circulation in primarily this exact location. These byproducts are potassium, lactate, carbon dioxide, and low oxygen partial pressure. The total peripheral resistance (TPR) drops.

On the other side, α1-adrenoreceptor-mediated vasoconstriction occurs in the periphery, especially in the intestinal tract. Also, the venous vessels contract and transport the blood that is stored in the veins into the arterial circulation as additional preload.

The consequence is an increased blood pressure amplitude, i.e. the difference between the systolic and the diastolic value rises.

Note: Under strain, Psyst is increased, Pdiast is slightly increased or remains the same, and the difference between the 2 increases. 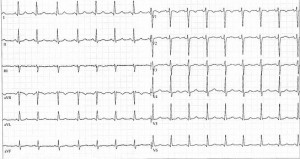 Analogous to the increased respiratory minute volume of the lung, the heart has to increase the output blood volume in order to ensure sufficient oxygenated blood supply for the muscles. Under strain, the heart has an increased stroke volume and increased cardiac output.

In contrast to the up to a 10-fold increase of the respiratory minute volume, the heart volume can only be increased 2–3 times the resting level in an untrained person. Here, the so-called C-fibers play an important role. They are afferent fibers of the muscles that cause an increase in the heart rate via the central circulatory center. 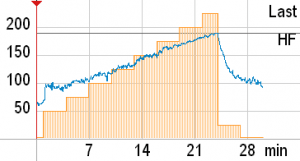 After the beginning of the strain, the heart rate rises with delay and reaches a ‘steady state’ that is dependent on the intensity of the action.

Hereby, there is a close relation between the strain load and heart rate since the stroke volume is only increased in the beginning and further adjustment is made via the factor of frequency.

If the body is above its endurance limit, the heart rate is not in a steady state but in a continuous increase.

Like the respiratory minute volume, the heart rate decreases with a certain delay after the strain has been terminated. Here, the body continues to need a high level of circulation in order to refill the used energy storage. The sum of recovery pulses, i.e. the number of pulse beats until the original resting heart rate is reached, was established as a feasible measure.

During activities below the endurance limit, the sum of recovery pulses is mostly below 100 and correlates with the load of the rendered performance.

Training summarizes all the processes of adaptation in the human body at repeated strain that lead to increased performance. A distinction is made between endurance training for long-term strains and strength training which aims for a short-term maximum power of musculature.

Endurance training requires frequently repeated and constant moderate strain. As mentioned before, the limiting factor for a physical strain is the cardiac output which means that the oxygen need of the muscle cannot be covered. Since the human heart rate cannot exceed a certain individual maximum value of 180–200/min, the body has to resort to the modification of the stroke volume of the left ventricle as a long-term adjustment.

Note: The maximum heart rate does not change in trained people either; the increase in performance is due to an increased stroke volume.

A central part of sports medicine is performance diagnostics, which quantify and track the fitness level of the subject. Several methods are available.

Spiroergometry is a frequently used diagnostic procedure to determine performance with the help of determining breathing gases (spirometry) under strain (ergometry). This method provides insights about the respiratory and cardiovascular system and their adaptability. 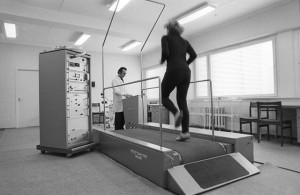 To simulate strain, the subject is placed on a bicycle- or treadmill-ergometer. During performance diagnostics, all vital parameters like heart rate and blood pressure are constantly monitored.

In the exercise stress test, the bicycle allows for a more reliable analysis since it is more stable. Additionally, spirometric diagnostics for the determination of respiratory volumes and the oxygen usage are done.

Then, the strain is gradually increased until reaching exhaustion while the responses of the body are observed. This way, one can determine, e.g., the individual endurance limit or the maximum heart rate in order to create a customized training plan.

Spiroergometry can help to localize the exact reason for fatigue or dyspnea that restricts the exercise capacity, to the functional problems of heart, lungs, or muscle.

The mentioned spiroergometry is often supplemented by lactate measurements. This involves the determination of lactate blood concentrations between the different levels of a strain of the ergometry. The blood is taken mostly from the earlobe.

Concentrations below 2 mmol/L suggest sufficient oxygen supply for the muscles. The area between 2 and 4 mmol/L is referred to as the aerobic-anaerobic transition zone. At concentrations > 4mmol/L, the anaerobic threshold is exceeded and the strain has to be terminated soon.