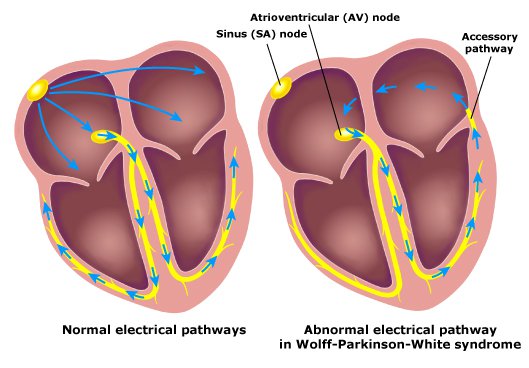 Wolff-Parkinson-White (WPW) syndrome is defined as tachyarrhythmia in which attacks of tachycardia occur in a patient due to the presence of an abnormal accessory pathway in the heart, which bypasses the conduction, fully or partially, via the atrioventricular (AV) node to the ventricles. The prognosis and long-term outcome of WPW syndrome are very good, especially if treatment aims to eliminate the abnormal accessory pathway.

The prevalence of WPW syndrome and pattern is less than 1% of the population with the WPW pattern being 100 times more common than WPW syndrome. The difference between both presentations will be discussed later in this article.

First, it is important to understand the normal conducting pathway of the heart, and how the impulses spread uniformly throughout the heart. Normally, the atria and ventricles are electrically isolated, where the discharged electrical impulses move from the SA node in the right atrium to the ventricles via the AV node and His-Purkinje system. 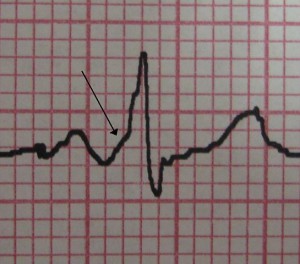 Patients with the pre-excitation syndrome have an anatomical accessory pathway that directly conducts impulses from the atria to the ventricles, bypassing the AV node of the heart and conducting impulses faster than the AV node without its characteristic delaying property. This results in a short PR interval seen on ECG. This accessory pathway is congenital in origin and results from the failure of resorption of the myocardial syncytium at the annulus fibrosis during fetal development.

The mechanism of the unidirectional conduction of impulses along the accessory pathway in either an anterograde or retrograde direction remains undetermined.

Based on electrophysiological studies, accessory atrioventricular pathways are located in any place along the AV ring or in the interventricular septum. The most frequently documented locations are:

Patients with an accessory pathway can be described as having either the WPW pattern or WPW syndrome based on the presence or absence of arrhythmias.

This term applies to a patient with ECG findings of pre-excitation in the absence of symptomatic arrhythmias.

This term applies to a patient with ECG findings of pre-excitation and symptomatic arrhythmias. In either situation, anterograde conduction of impulses, from the atria to the ventricles through an accessory pathway, will result in earlier activation or pre-excitation of part of the ventricles.

The vast majority of patients with WPW pattern are asymptomatic, while a small percentage have arrhythmias (for example, atrial fibrillation with rapid ventricular response) as a part of the WPW syndrome. Patients with WPW syndrome and developed arrhythmia will present with any of the following manifestations:

WPW syndrome can be associated with either:

Atrioventricular reentrant tachycardia (AVRT): This occurs when the heart has a circuit that consists of 2 pathways – a normal AV conduction system and the AV accessory pathway, where both are linked by tissues. If there are adequate differences in conduction time and refractoriness between the normal conducting system and the bypass tract, premature impulse from the atrium of the ventricle can initiate reentry.

The 2 main types of this arrhythmia in WPW syndrome are orthodromic and antidromic AVRT.

The heart consists of an accessory pathway, but is not involved in the initiation of arrhythmia, and includes atrioventricular nodal reentrant tachycardia (AVNRT), ventricular tachycardia, and ventricular fibrillation.

Diagnosis of the WPW pattern requires only ECG which shows characteristic findings.

Diagnosis of WPW syndrome involves the identification of the WPW pattern on surface ECG of a patient who develops arrhythmia, especially in young adults presenting with paroxysmal arrhythmia. 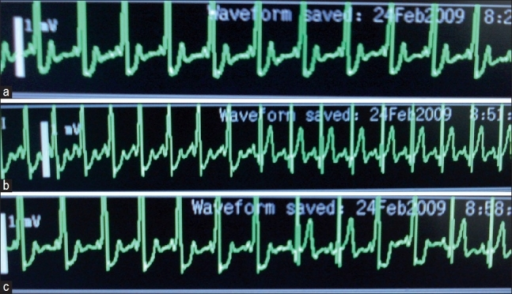 Patients with WPW syndrome are treated because they either have:

The antegrade limb (the pathway that conducts impulses to the ventricle) is the AV node and His-Purkinje system, thus, ventricles are not pre-excited.

The immediate treatment of macroreentrant orthodromic tachycardias is similar to that for AVNRT, which aims to alter impulse conduction in the AV node. 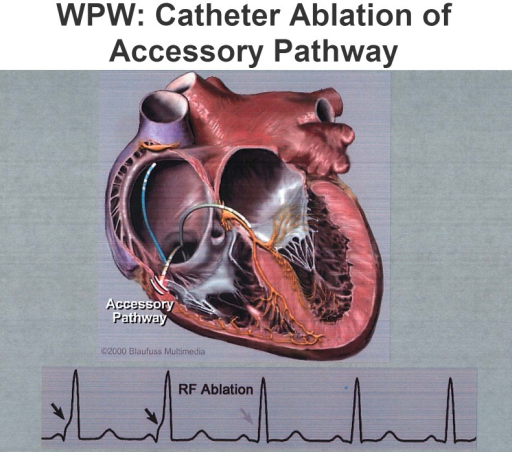 Image: Schema showing the use of catheter technique for ablation of a right free wall accessory pathway. The rhythm strip shows the disappearance of the delta wave with the application of radiofrequency energy. By Openi, License: CC BY 3.0

Catheter ablation therapy appears to be effective in more than 90% of patients with WPW syndrome regardless of age. It is indicated in a patient with a history of:

Prevention of recurrent supraventricular reentrant tachycardias that are associated with accessory pathways (accessory pathways) is possible with the chronic oral administration of B-blockers and/or calcium channel blockers (verapamil or diltiazem).

Patients with atrial fibrillation and rapid ventricular response should receive class IA or IC antiarrhythmic drugs, such as quinidine, flecainide or propafenone, to slow conduction through the accessory pathway and increase its refractory period.