Water Balance: How the Body regulates the Fluids | Lecturio

Are you more of a visual learner? Check out our online video lectures and start your renal system course now for free! 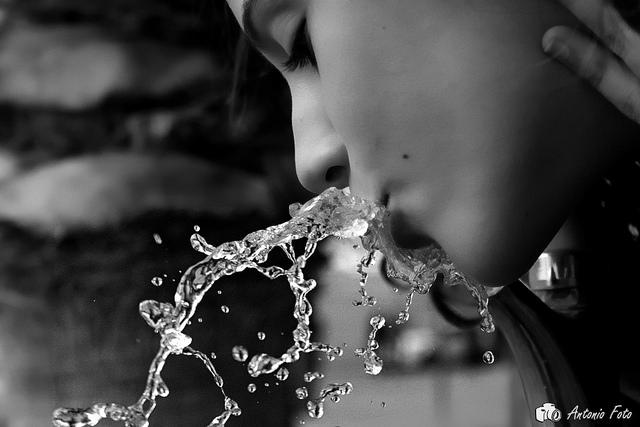 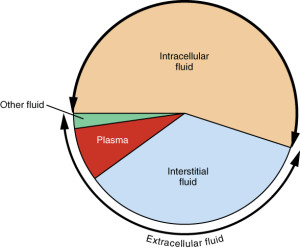 Image: “Distribution of water in the human body” by OpenStax College. License: CC BY 3.0

The total weight of an average human body is made up of 35–40 % tissue and bone and 60–65 % water. We call this water total body water, and it is distributed into 3 compartments throughout the body. Two-thirds of the total body water is intracellular and found in the cytoplasm and nucleus of all types of cells: red blood cells, white blood cells, epithelial cells, fat cells, etc.

The other 1/3 of total body water is in the extracellular space. One-third of the extracellular water is found intravascularly in the plasma within the blood vessels, and the other two-thirds are in the interstitium (the space between cells that makes up tissue). So, all of the plasma that maintains tissue perfusion and blood pressure only equals a paltry 1/9 of the total body water. 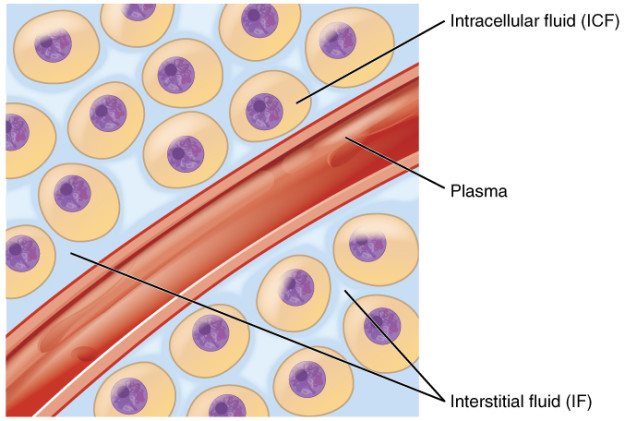 Image: “Fluid compartments in the human body” by PhilSchatz. License: CC BY 4.0

Water is added to the body in a variety of ways. Under normal conditions, water is consumed as a free liquid or bound within solid food. About 22 % of consumed water comes from food consumption in a typical western diet.

Normally, as much as 2 L of dietary fluid can be consumed in any one day. As it passes through the gastrointestinal (GI) system water and food is mixed with 6–7 L of digestive secretions consisting of saliva, secretions of the liver, stomach, and pancreas, and bicarbonate solutions. Most of this fluid will be absorbed by the mucous membranes in the small intestine and, to a lesser extent, the large intestine.

80 % of consumed water is absorbed by the small intestine. Water passes through the membranes of the epithelial cells that line the small intestine as solutes, especially sodium, are absorbed. Sodium is absorbed into the enterocytes through transport proteins found in the luminal side of the cells. These are primarily cotransporters that move sodium and glucose or amino acids into the enterocytes. This forms an osmotic gradient that pulls water into the cell. Water continues to follow the sodium as it is pumped into the interstitial space at the basal-luminal side of the cell and then into the capillaries of the portal system. Water continues to be absorbed in the large intestine, though to a lesser degree, with other nutrients and vitamins.

Fluids can also be added intravenously when in the hospital. It is always preferred to provide nutrients PO (“per os” or “by mouth”), but some procedures, tests, and most surgeries require the patient to be on an empty stomach. This is called NPO (“nil per os” or “nothing by mouth”). In these cases and when the patient is physically unable to eat due to unconsciousness or certain aspiration concerns, nutrients and fluids are supplied intravenously. The type and rate of fluid provided can be a very powerful medical tool for treating a variety of ailments. 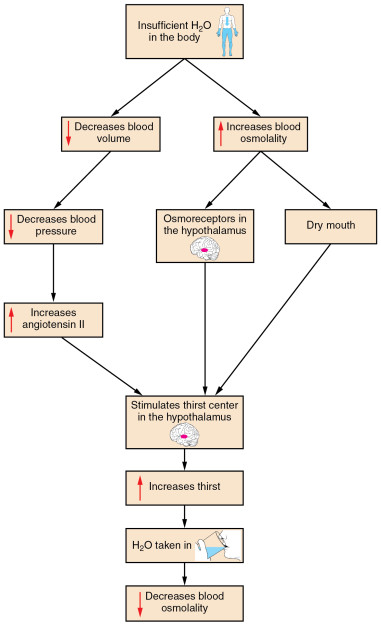 Fluids are removed from the body in 3 different ways: urination, defecation, and intravascular fluid loss.

The process of urination starts at the kidneys where electrolytes and other small particles are filtered out of the blood and then some material is reabsorbed or secreted into the urine which is then excreted. This process is very carefully controlled by several modulators including the 3 hormones aldosterone, vasopressin (antidiuretic protein), and natriuretic peptide. These hormones are released in response to the body’s physiologic state in order to regulate plasma volume, plasma osmolality, and certain electrolyte concentrations (mostly sodium).

Water is also lost during defecation. Most of the fluid we intake is reabsorbed from consumed food and drink by the small intestine, but some escapes in the feces. This is an osmotic process as the food bolus travels down the gastrointestinal system. If the bolus travels too fast and has spent an insufficient time allowing for the absorption of a sufficient amount of water then the stool is watery, referred to as diarrhea (a condition where there is too much fluid in the fecal matter). Young and healthy adults may not suffer any consequences from occasional diarrhea but, in both the very young and elderly, the water loss due to diarrhea could lead to major health concerns including dehydration, malnutrition, metabolic acidosis, and hypovolemic shock.

Uncontrolled intravascular fluid loss, as in trauma, can also lead to hypovolemic shock. Fluid can also be removed from the intravascular space during the process of dialysis in patients with kidney failure.

Regulation of Water and Na+ Balance

The body has no way of measuring extracellular fluid levels (EFC). However, through various receptors found throughout the body, the effective circulating volume (ECV) can be measured. ECV is a measure of the fluid that perfuses tissue.

EFC and ECV are proportional in healthy adults. However, in a diseased state such as congestive heart failure or cirrhosis, the EFC may become low, resulting in a response by the body to retain fluids even though the ECV appears normal. The result is a hypervolemic state with peripheral edema, pulmonary edema, and ascites, called anasarca. 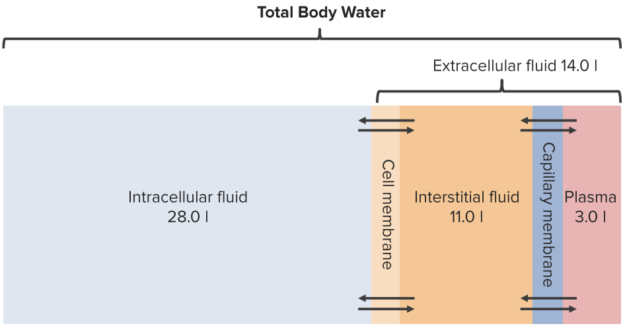 When activated, RAAS works to increase blood pressure and fluid retention and is the target of many hypertension medications including ACE inhibitors and aldosterone receptors antagonists. This system starts at the afferent arterioles of the kidney. Modified smooth muscle cells called juxtaglomerular cells located in these arterioles of the kidneys detect blood pressure with specialized receptors. When the blood pressure drops or when they are signaled by the macula densa for sensing low sodium concentration, the juxtaglomerular cells release the enzyme renin into circulation.

In the brain, angiotensin II stimulates the thirst center and the release of vasopressin (ADH). It also causes the adrenal glands to release the mineralocorticoid aldosterone. Aldosterone then affects the kidney even further by stimulating the tubular system to increase reabsorption of sodium, chloride, and water and also secrete potassium. 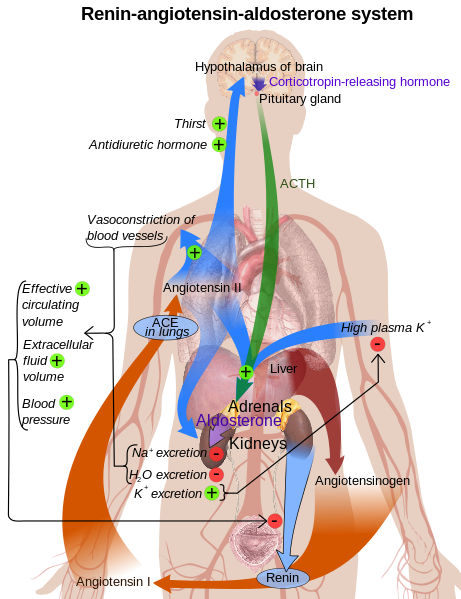 Atrial natriuretic peptide (ANP) works to oppose aldosterone. It is a peptide hormone that is synthesized and released by myocytes found in the atria of the heart in response to hypervolemia or angiotensin II. In the kidney, it works to increase the glomerular filtration rate and the excretion of sodium, chloride, and water. It also relaxes systemic afferent arterioles to lower systemic blood pressure. 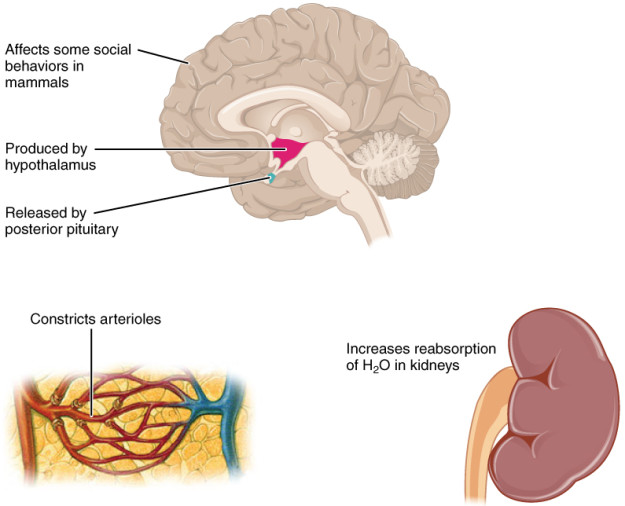 There are several ADH receptors. AVPR2 is found in the basolateral side of the epithelial cells that line the collecting ducts and tubules in the kidney. When AVPR2 is stimulated, multiple copies of the water transport protein aquaporin-2 are inserted into the luminal side of the collecting duct cells, and water is reabsorbed down its concentration gradient and into the systemic circulation.

As demonstrated in the image above, there is a linear proportional relationship between the levels of ADH secreted into the bloodstream and the osmolality of the blood itself. ADH is secreted by the posterior pituitary gland when baroreceptors sense one of 2 triggers:

The effects of angiotensin II include aldosterone secretion, peripheral vasoconstriction, and constriction of the efferent arterioles of the kidneys. This constriction leads to an increase in the glomerular filtration rate (GFR), which raises the colloid osmotic pressure and lowers the hydrostatic pressure of the capillaries surrounding the tubular system. Overall, these changes infiltration will bring about a reduction of water and sodium excretion.

Aldosterone increases renal reabsorption of water and sodium, as well as the secretion of potassium. Its release is triggered by the activation of the renin-angiotensin system via drops in arterial blood pressure, specifically renal blood pressure. 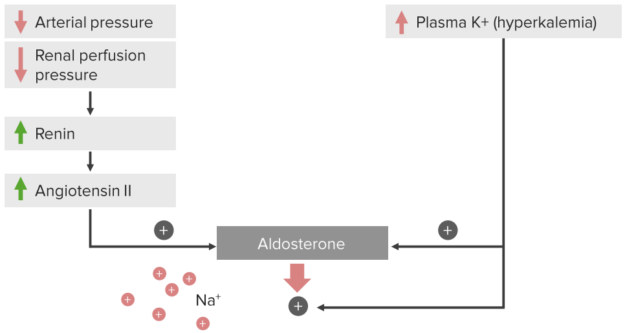 One thought on “Water Balance: Regulation of Fluid Balance”