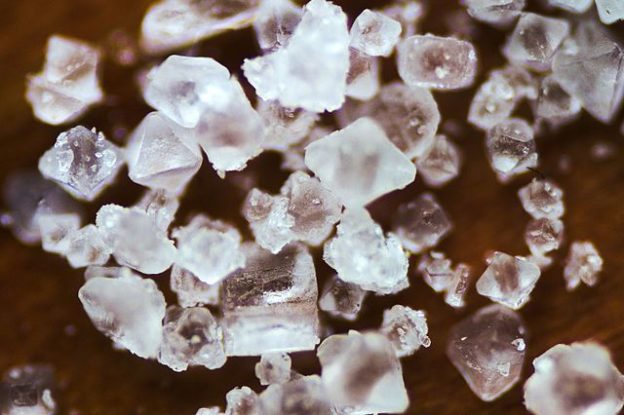 Fluid Compartments of the Body

Normally, there is a continuous exchange of body fluids and solutes between the external environment and different compartments of the body. The properties of extracellular fluid (ECF) and intracellular fluid (ICF) are summarized in the following table:

The large anionic proteins in plasma result in a net negative charge. This attracts positively charged ions (cations), such as potassium and sodium ions; thus, holding an extra amount of cations in the plasma along with protein. 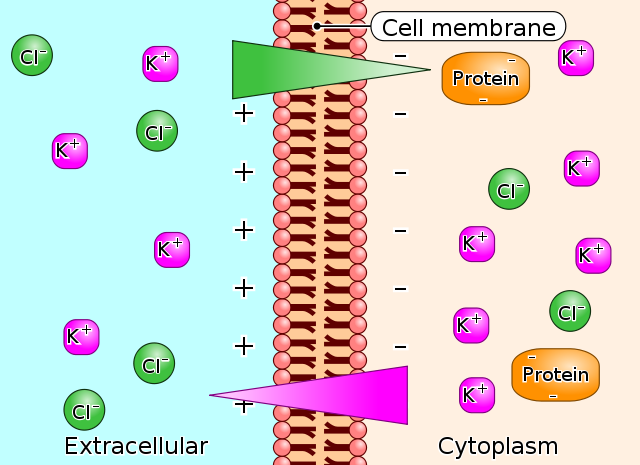 The compositions of extracellular fluid are regulated chiefly by the kidneys (discussed in a later section). The ECF balance between plasma and interstitial fluid is determined chiefly by the balance of hydrostatic and colloid osmotic forces across the capillary membranes.

There is a highly permeable cell membrane that separates ECF from ICF, allowing water to diffuse easily from the interstitial fluid into the cells. In contrast to ECF, ICF contains concentrations of:

ICF contains a low concentration of:

Moreover, ICF contains a large amount of protein, which is 4 times the amount of plasma protein.

Water moves rapidly across the cell membrane by this osmotic effect to keep ECF isotonic with ICF. 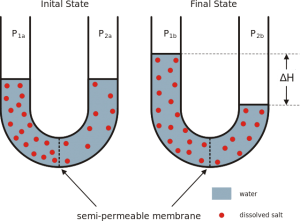 The total number of particles in a solution is measured in osmoles.

For example, a solution containing 1 mole of glucose in each liter has a concentration of 1 osm/L.

Macromolecules (mainly proteins) determine the so-called oncotic pressure. Intravascular albumin keeps water in plasma. In the case of a loss of albumin (cirrhosis, nephrotic syndrome), the oncotic pressure of the plasma decreases and water moves into the interstitium; edema then results. 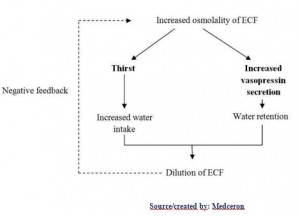 The 2 main mechanisms in the regulation of ECF osmolality, and sodium concentration are:

ADH is synthesized in the hypothalamus and stored in the posterior pituitary. It is released into the bloodstream in response to various stimuli. Its secretion is regulated by osmoreceptors that are located in the anterior hypothalamus.

The stimuli of ADH secretion are:

When the osmolality (plasma sodium concentration) rises above the upper normal limit (285 mOsm/kg) as in the case of water deficit, the shrinkage of osmoreceptors occurs. These osmoreceptors transmit signals to the posterior pituitary which stimulates the release of ADH into the bloodstream to reach the kidney, and vice versa.

The decrease of arterial pressure and/or blood volume, as in the case of hypovolemia, stimulates the release of ADH, as well as the activation of the renin-angiotensin system, which stimulates aldosterone secretion and promotes sodium and water retention (discussed later).

ADH reaches the kidney and increases the permeability of the late distal tubules and collecting ducts, so that water diffuses into the hypertonic interstitium of the renal pyramids. This results in the reabsorption of water into the bloodstream, while sodium and other solutes are continuously excreted in the urine. This causes dilution of solutes in ECF and correction of the high osmolality, forming concentrated urine.

The opposite of these sequences occurs when there is low osmolality of ECF. Less ADH is secreted which leads to a decrease in the water permeability of the late distal tubules and collecting ducts, resulting in increased water excretion (this results in an increase in ECF osmolality) and formation of diluted urine.

Increased ECF osmolality causes a shrinkage of the thirst center (located anterolaterally in the preoptic nucleus), resulting in the stimulation of thirst sensation (leading to increased fluid intake and dilution of the high ECF osmolality to normal, and vice versa).

Both osmoreceptor ADH secretion and thirst mechanisms work simultaneously to keep ECF osmolality and volume within normal levels. Below is a summary of different factors that affect the regulatory mechanisms of ECF composition and volume: 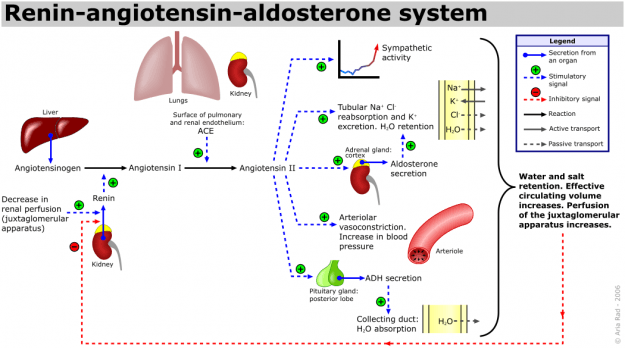 Image: “The renin-angiotensin system (RAS) or the renin-angiotensin-aldosterone system (RAAS). Start reading this schematic from the left, where it says “Decrease in renal perfusion (juxtaglomerular apparatus)”. Alternatively, the RAAS can also be activated by a low NaCl concentration in the macula densa or by sympathetic activation.” by A. Rad. License: CC BY-SA 3.0.  The blue and red dashed arrows indicate stimulatory or inhibitory signals, which is also indicated by the +/-. In the tubule and collecting duct graphics, the grey dashed arrows indicate passive transport processes, contrary to the active transport processes which are indicated by the solid grey arrows. The other solid arrows either indicate a secretion from an organ (blue, with a starting spot) or a reaction (black). These 2 processes can be stimulated or inhibited by other factors.

Role of the renin-angiotensin-aldosterone system

Angiotensin II and aldosterone regulate the concentration of sodium in extreme conditions by altering the reabsorption of sodium by the renal tubules. This results in the alteration of water reabsorption, along with sodium. Thus, activation of this system leads to an increase of both sodium quantity and ECF volume (hence also a little change in the sodium concentration because water is absorbed along with sodium, a process called sodium and water retention.

When the blood pressure/volume falls, the juxtaglomerular apparatus of the kidneys start to release renin, which passes out of the kidney and enters into the circulation. Renin then acts enzymatically on angiotensinogen to release angiotensin I.

Within a few seconds to minutes after the formation of angiotensin I, it is converted to angiotensin II by angiotensin-converting enzyme (ACE), which is present in the endothelium of the lung vessels.

Angiotensin II has 2 principal effects that can elevate arterial pressure: 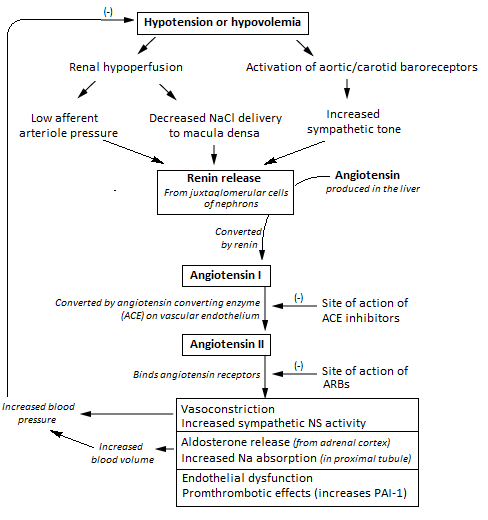 Cushing syndrome is an abnormal increase in cortisol levels. 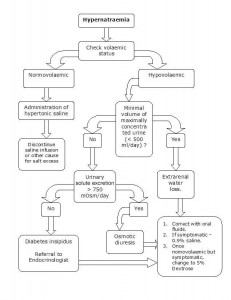 If there is a circulatory compromise, it should be treated with isotonic saline to correct the water deficit.

Patients without circulatory compromise should be treated with hypotonic solutions.

Hyponatremia is a serum sodium level of < 136 mEq/L. It can be hypertonic, hypotonic, or isotonic.

Hyperlipidemia, hyperproteinemia, and hyperglycemia can cause a laboratory artifact as a result of a decreased water component of the plasma, so it is needed to rule out the spurious hyponatremia at first.

It occurs in hyperosmolar states, in which a large amount of impermeable solutes cannot cross cell membranes, such as mannitol and glucose (hyperglycemia). In prolonged uncorrected hyperglycemia, hyperosmolality can withdraw water into ECF, diluting the sodium and resulting in hyponatremia. Hypernatremia can also occur if osmotic diuresis develops.

It is classified according to the volume status of the body into:

This is indicated in:

Emergency dialysis is indicated in patients with:

Those who do not need urgent treatment can be treated with fluid restriction with an isotonic saline replacement to avoid circulatory compromise, together with continuous observation of the patient. Do not forget to treat the underlying cause, e.g. hormonal replacement in adrenal insufficiency.

General principles of disorders of water balance (hyponatremia and hypernatremia) and sodium balance (hypovolemia and edema) via uptodate.com