Histology of Blood Vessels: Wall Structure of Arteries and Veins

In the human circulatory system, oxygenated blood is transported away from the heart through the arteries. The arteries branch into smaller blood vessels called arterioles, where they end in capillaries or where a capillary network begins. This is where substance exchange between the blood and interstitium takes place. In turn, the capillaries lead to larger vessels, the venules, which then lead to the veins. The venules then transport the deoxygenated blood from the periphery back to the heart.

General Structure and Functions of Vessels

All larger vessels have the same general structure, which can vary depending on their location and function (i.e., from inside to outside): 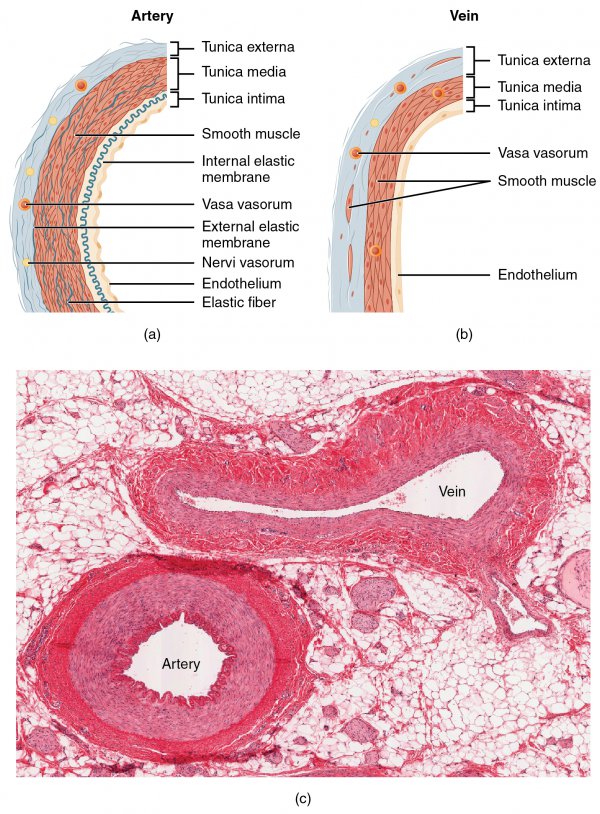 Comparison of layers in arteries and veins

Table: “Comparison of tunics in arteries and veins” by von Phil Schatz. License: CC BY 4.0

Histology and differentiation of arteries

Arteries transport oxygenated blood from the heart to the periphery of the body; this is why the arterial system is high pressure.

The arterial part of the circulatory system can be subdivided histologically into 2 types:

Arteries narrow toward the capillary network and become arterioles. Arterioles have a diameter of 10–20 µm due to the absence of the stratum subendothelial of the intima. They are designated as resistance vessels since they can regulate blood flow velocity by means of their respective muscle walls (approximately 120 mm Hg). The aorta is the largest and closest to the heart, beginning right after the aortic valve. The major arterial branches of the aorta comprise 2 coronary arteries that originate just above the aortic valve.

The next part is the capillary exchange system, which is located in the peripheral body regions and has a length of tens of thousands of kilometers, resulting in a large exchange surface. The conditions for gas and substance exchange between the blood and the interstitium are optimal, as the cross-sectional area is very small (6–12 µm) and thus the correlating flow velocity of the blood is very low (0.3 mm/s; for comparison, the flow velocity in arteries amounts to approximately 300 mm/s). Another important task performed by the capillaries is the elimination of byproducts.

The cross-section is so small that erythrocytes can, at some points, only pass through vessels by deforming themselves. The capillary wall generally consists of an endothelial layer, a basal membrane, and pericytes (contractile cells that surround the endothelial cells).

Image: “Types of arteries and arterioles” by Phil Schatz. License: CC BY 4.0

Under an electron microscope, 3 different types of capillaries are distinguished:

Note: Tight junction = cell contacts that connect epithelial cells to each other.

Veins and Their Special Features

The anatomy of veins is similar to that of arteries. However, the walls of veins are significantly thinner, so blood pressure within them is markedly lower. This results in a venous low-pressure system, which contains 85% of blood volume.

In histological specimens, the individual wall layers of the veins cannot be separated from each other as easily as in arteries.

A special feature of veins is the so-called venous valve, which can be found in the wall of the torso as well as in the extremities. Backflow of the blood into the periphery must be inhibited by venous valves (intima duplications) since the low blood pressure found in veins is not sufficient for the transportation of blood back into the heart. This occurs via rhythmic closure of the valves, which is further supported by muscular pumping.

The veins usually run parallel to the arteries. However, the number of venous vessels is greater than the number of arterial vessels, due to the presence of both deep and superficial veins. The latter lie directly under the surface of the skin. The deep venous system is connected with the superficial system via perforating veins.

The venous system also contains smaller vessels — venules — that correspond to the smaller vessels in arteries. Their location is postcapillary, and they carry blood from the capillary network into the veins. Their diameter increases constantly from the end of the capillaries to the veins; this is accompanied by an increasing coat of muscle cells.

Despite the differences in structure and function, close interaction between arteries and veins occurs in the circulatory system to ensure optimal gas and substance exchange, and the transport of substances.

The circulatory system is a closed system that is divided into a greater and a lesser system. The portal vein system plays a significant role as a sub-branch. A brief overview of this system is shown below. 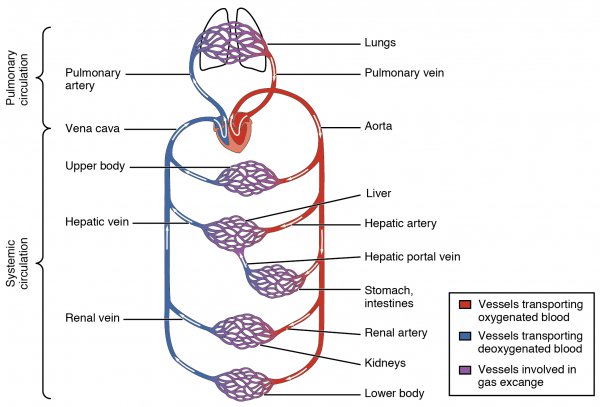 The Direction of Blood Flow

The lesser or pulmonary circulation connects directly to the systemic circulation. Its function is to reoxygenate blood and transport it back to the greater circulation, which in turn supplies the organs with blood.

As noted, another important part of the circulatory system is the portal vein system. The venous return of the unpaired abdominal organs (the gastrointestinal tract, the spleen, and the pancreas) occurs via the liver or a common venous stem before the nutritious blood is carried back to the systemic circulation by the inferior vena cava.

The portal vein collects the venous blood and carries it to the liver, where it branches into another capillary system, the rete mirabile venosum (“wonderful net”). The substrates that were absorbed in the gastrointestinal tract are metabolized here and any potentially poisonous substances are eliminated. The “detoxified” blood then passes through the hepatic veins to reach the inferior vena cava.

The so-called first-pass effect can occur at this location due to metabolic processes; medications are thereby partially or completely degraded, meaning they are no longer able to act via the blood.

A short overview of the most important cardinal symptoms and clinical pictures that a prospective physician should understand is shown below.