Are you more of a visual learner? Check out our online video lectures and start your parathyroid gland disorders course now for free! 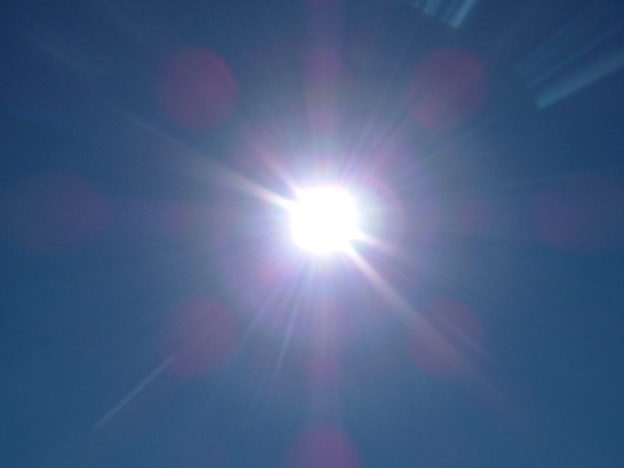 Image: “The sun.” by Lykaestria at the English language Wikipedia. License: CC BY-SA 3.0

Production and Effects of Vitamin D

The cytochrome P450 proteins are monooxygenases that catalyze many reactions involved in drug metabolism, in addition to reactions pertaining to the synthesis of cholesterol, steroids, and other lipids. Found in the liver, vitamin D 25-hydroxylase is a microsomal vitamin D hydroxylase that converts vitamin D into 25-hydroxyvitamin D (calcidiol), which is the major circulatory form of vitamin D. It should be noted that this process has a negative feedback mechanism that regulates the levels of 25-hydroxycholecalciferol in plasma. 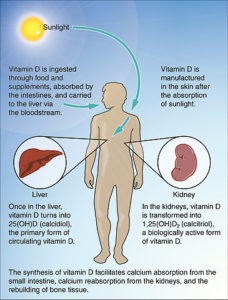 Image: Synthesis of vitamin D in the human body. By: OpenStax College. License: CC BY 3.0

The active form of vitamin D has various effects on different systems, including the renal, skeletal, and gastrointestinal systems, and it regulates the absorption and excretion of calcium and phosphate.

Calcium is absorbed in the small intestine by 2 general mechanisms: a transcellular active transport process located largely in the duodenum and upper jejunum, and a paracellular, passive process mediated by facilitated diffusion that functions throughout the length of the intestine.

The transcellular process involves 3 major steps: entry across the brush border through a molecular structure termed CaT1; intracellular diffusion, mediated largely by the cytosolic calcium-binding protein (calbindin D or CaBP); and extrusion, mediated largely by CaATPase. Chyme travels down the intestinal lumen in approx. 3 h, spending only minutes in the duodenum, but over 2 h in the distal half of the small intestine.

In the kidneys, vitamin D promotes the absorption of both calcium and phosphate by the epithelial cells of the renal tubules. This is unlike the effects of parathyroid hormone on the kidney which promotes calcium absorption and phosphate excretion. The effects of the hormone on bone in the development of diseases such as rickets are discussed later.

This is especially important in developing countries, where fortified vitamin D in food is occasionally unavailable for consumption.

Image: Vitamin D and calcium absorption from the diet. By: Lecturio

Lack of exposure to sunlight

It is also plausible that geographical locations away from the equator and the winter season (given that exposure to sunlight is decreased considerably) predispose to vitamin D deficiency. The elderly also have a reduction in the synthesis of vitamin D in the skin and other problems such as achlorhydria which decrease the absorption of vitamin D.

Extensive skin burn, which prevents the synthesis of vitamin D

Increase and decrease of vitamin D:

Rickets and osteomalacia have been explained in great detail in a separate article and readers are encouraged to review that article to enhance their knowledge on the topic. Both the occurrence of vitamin D-dependent type 1 rickets and vitamin D-resistant rickets have been discussed. Osteomalacia is the adult counterpart of rickets.

Interpretation of Serum Calcium and Phosphate

The normal range of calcium is 8.8–10.3 mg/dL (2.2–4.6 mmol/L). Calcium is present in 3 forms in the body. It is either bound to organic and inorganic anions like citrate (occurrence 15%) or bound to albumin (occurrence 40%); it can also exist in the free active ionized form.

Although total calcium consists of both bound and free forms, in diseases such as hypoalbuminemia, there is a disproportionate decline of bound calcium. It should also be noted that to establish a diagnosis, the concomitant measurement of parathyroid hormone levels and vitamin D is recommended.

In acute respiratory alkalosis, the increased binding of calcium to albumin (due to changes in extracellular pH) causes a decrease in ionized calcium levels.

In vitamin D deficiency, the calcium level may be corrected by the compensatory secretion of parathyroid hormone.

Note: Calcium and phosphate tend to deviate together (both up or both down) in vitamin D derangements, whereas, they deviate in opposite directions in parathyroid disease.

In the case of osteomalacia, the scenario will be reductions in serum vitamin D, serum and urinary calcium, and phosphate level, along with compensatory elevations of parathyroid hormone and bone-derived alkaline phosphatase.

It should be noted that in hypocalcemia, which occurs following vitamin D deficiency, the concomitant increase in parathyroid hormone levels, which occurs as a compensatory mechanism, masks the development of hypocalcemia. At the same time, this increase in parathyroid hormone levels results in increased urinary phosphate excretion, leading to the development of hypophosphatemia. Circulating 25-hydroxyvitamin D is the best index of vitamin D sufficiency in the body.

Hypercalcemia is an increase in calcium levels above 10.5 mg/dL. Measurement of serum calcium and phosphorus, along with the assessment of renal function should be considered. Parathyroid hormone levels should also be measured.

Clinical manifestations, diagnosis, and treatment of osteomalacia via uptodate.com