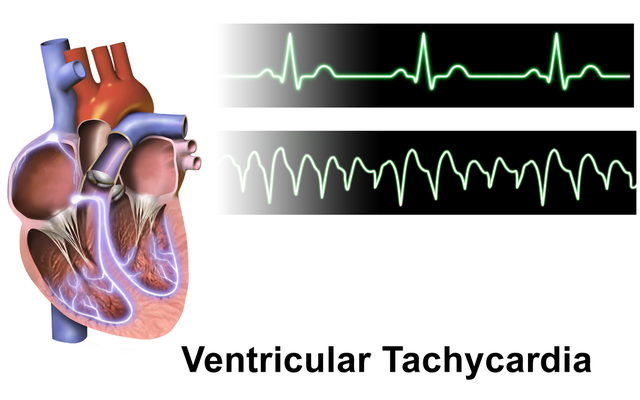 Ventricular tachycardia (VT) refers to any heart rate greater than 100 beats per minute that begins in the ventricles. Its different classification systems are based on duration, morphology, and hemodynamic effect. For example, a non-sustained VT is short, lasting less than 30 seconds, while a sustained VT is longer than 30 seconds.

VTs can be caused by a variety of conditions, including:

There are three important types of ventricular tachyarrhythmia:

Ventricular tachycardia is further divided into pulse and pulseless types. In pulseless tachycardia, the heart rate is too rapid, and the rhythm is too uncoordinated to pump blood. This condition should be treated like ventricular fibrillation. Advanced cardiac life support measures should be started immediately, including cardiac monitoring, oxygen, medication, and cardioversion, if necessary. 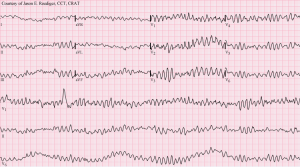 Ventricular fibrillation (VF) is a more severe ventricular tachyarrhythmia. In this arrhythmia, there is a rapid and sporadic beat, resulting in immediate hemodynamic collapse. Death is likely within minutes unless advanced cardiac life support measures are started immediately.

Polymorphic ventricular tachycardia (Torsade de Pointes) is a ventricular tachyarrhythmia with a rapidly changing rate and rhythm. The rate can change between 150–250 beats per minute, and the amplitude also changes when observed by ECG. This arrhythmia may spontaneously revert to normal or progress into ventricular fibrillation.

The most common cause of  VT is an ischemic disease, often after an MI. The risk of VT is also increased by scar formation via surgery or infiltrative cardiomyopathies due to systemic inflammatory diseases, such as sarcoidosis, amyloidosis, and hemochromatosis.

Some patients have a naturally long QT interval. The QT interval is measured on an ECG strip from the start of the Q wave to the end of the T wave and represents the depolarization and repolarization of the ventricles of the heart.

Electrolyte imbalance can lead to heart arrhythmias. The heart is most sensitive to low levels of potassium (hypokalemia), calcium (hypocalcemia), and magnesium (hypomagnesemia).

Digitalis toxicity may result from the excessive use of or an abnormal reaction to the drug and increases the risk of developing monomorphic ventricular tachycardia.

Pathology and Pathophysiology of Ventricular Tachycardia

Ventricular tachyarrhythmias are abnormal, potentially deadly arrhythmias caused by an abnormal ectopic contraction in the ventricle. The condition may be benign if the ectopic signal is regular and stationary, and the cardiac output is maintained. However, if the signal moves around the ventricle or the rate changes rapidly, then arrhythmia could rapidly result in cardiovascular collapse and death. The most common cause of VT is ischemic change after coronary artery disease or a myocardial ischemic event due to scar formation.

The normal electrical signal slows as it passes through the scar tissue, which allows the surrounding ventricle to repolarize. The slowed signal depolarizes the repolarized ventricular tissue before the supraventricular signal can pass through the ventricular conduction fibers.

The ectopic beat causes the ventricle to beat very fast (greater than 100 beats per minute) and out of sequence with the atria. The result is a drop in cardiac output and, potentially, sudden death. If the rapid ventricular contraction rate is tolerated, then arrhythmia may cause cardiomyopathy over time.

These symptoms often cause anxiety and agitation in the patient. Hypoperfusion to the brain may result in lethargy or coma. Additionally, the patient may describe a sensation of neck fullness and difficulty breathing as the venous blood pools and venous pressure increases.

On physical exam, patients with VT will show tachycardia. Due to the low cardiac output, they may also show hypotension and tachypnea. VT is also associated with cannon A waves. In this condition, the atria and ventricle contract at the same time, producing a strong pressure wave against the mitral and tricuspid valves of the heart. The wave may be visible, passing up the jugular vein.

Other symptoms include jaw pain and cough. Other conditions produce a cannon A wave, including pulmonary hypertension and complete heart block (third-degree AV block).

The patient may experience some short-term or permanent physical changes after VT has been converted to sinus rhythm. Displacement of the point of maximal impulse is possible. Any structural heart changes that result in valve disease may produce a murmur. An S3 gallop may also develop.

Ventricular tachyarrhythmias are potentially life-threatening. If VT is a concern, then advanced cardiac life support measures should be activated while making the diagnosis.

An electrocardiogram and physical findings are sufficient to diagnose VT. Tachycardia (greater than 100 beats per minute) with wide QRS complexes (> 120 ms) is sufficient for diagnosis. 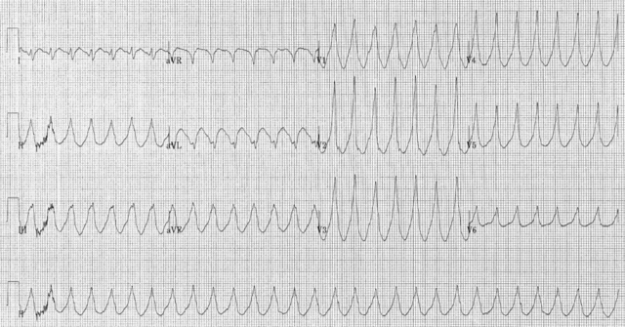 The ectopic beat is constant, and the QRS wave on ECG will be abnormal but consistent.

The ectopic beat has many foci in the ventricles and produces a waveform of QRS complexes that appear to twist around an axis. The most common polymorphic ventricular tachycardia condition is Torsade de Pointes or “twisting of the points.”

Measure electrolytes for abnormally high or low levels, especially potassium, calcium, and magnesium. Measure the blood for medications that may prolong QT or induce VT, such as digoxin or tricyclic antidepressants. Measure for recreational drugs such as cocaine and methamphetamines. Evaluate the heart for damage by measuring cardiac enzymes, including troponin I and troponin T.

Ventricular tachycardia treatment can be broken up into short term and long term treatment.

A stable patient with prolonged monomorphic ventricular tachycardia but no signs of end-organ damage should be treated with medication-induced cardioversion with procainamide, sotalol, or lidocaine. Patients with left ventricular dysfunction should undergo cardioversion with amiodarone or lidocaine. These antiarrhythmics are preferable because they will not exacerbate left heart failure where procainamide may.

A stable patient with polymorphic ventricular tachycardia should be treated with IV magnesium sulfate, cardioversion, and an antiarrhythmic that will not prolong the QT interval (procainamide and amiodarone are contraindicated).

The goal of long-term treatment is to prevent ventricular tachycardia with the most effective and conservative treatment available. Treatment options include medication (antiarrhythmics), ablation, and implantable cardioverter-defibrillator implantation. Additionally, evaluate the QT interval and remove and change medications that may unnecessarily prolong the QT interval.

Progression and Prognosis of Ventricular Tachycardia