The Ventricular System of the Brain | Online Medical Library

Image: “Ventricles of the Brain” by Bruce Blaus. License: CC BY 3.0 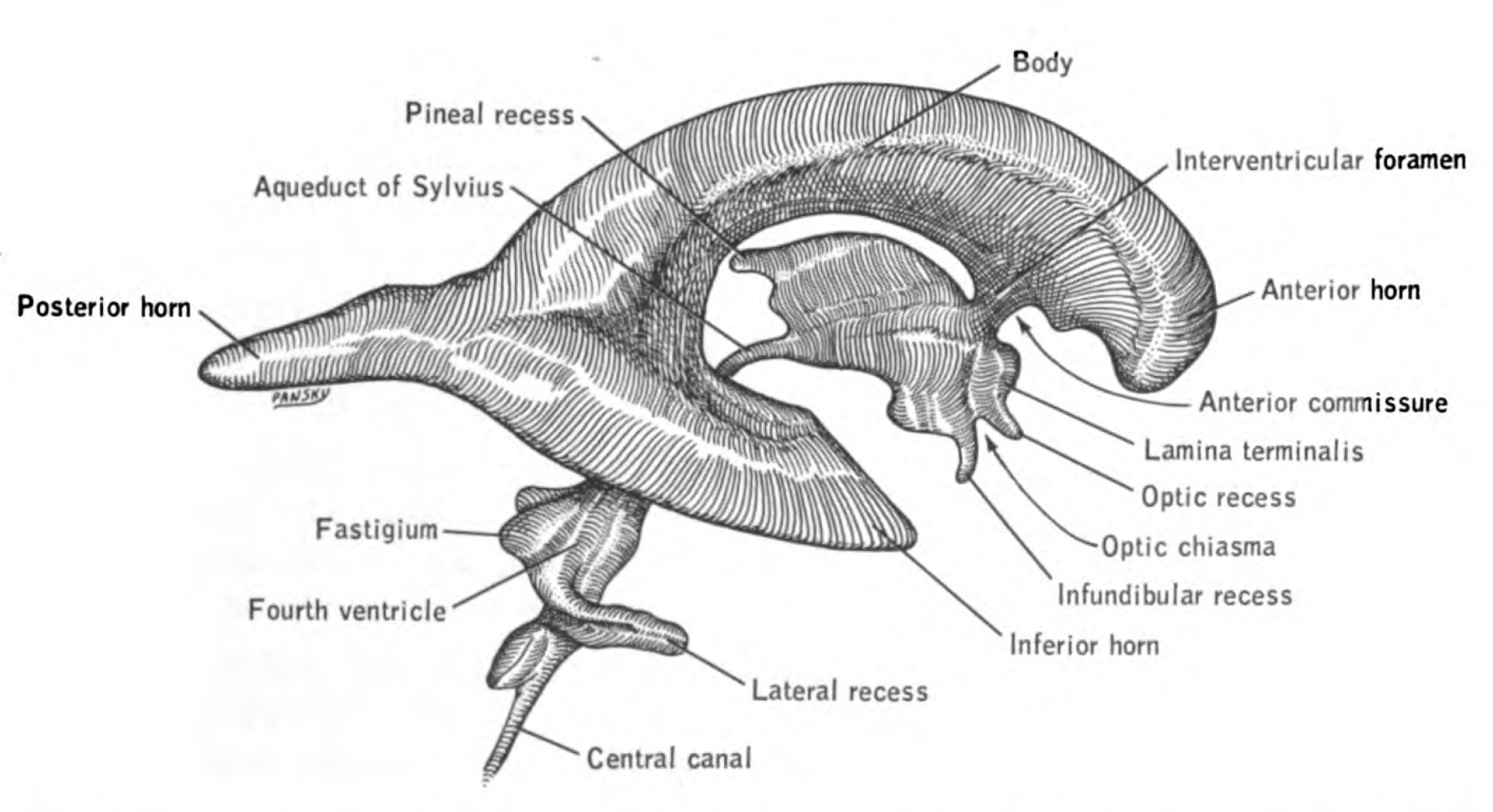 Topography of the Ventricular System: The Inner Cerebrospinal Fluid Spaces

Topography of the Lateral Ventricles

The 2 lateral ventricles constitute the largest cavities of the ventricular system and are further subdivided. It is differentiated between the anterior horn (cornu frontale, anterius) the inferior horn (cornu temporale, inferius) and the posterior horn (cornu occipitale, posterius). The individual components are assigned to specific areas of the brain, depending on their topographic location.

Topography of the 3rd Ventricle

The 3rd ventricle is associated with the interbrain (diencephalon = epithalamus, thalamus, and hypothalamus), which borders the lateral wall. The 2 thalami touch each other in the area of the interthalamic adhesion (also known as the intermediate-mass or middle commissure). However, this is not a functional connection and there are no commissural fibers between the 2 thalami. The cerebral aqueduct, which connects the 3rd and the 4th ventricles, is attributed to the mesencephalon.

Topography of the 4th Ventricle

Functions of the Ventricular System

Structure of the Choroid Plexus 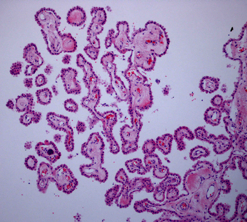 The plexus itself is lined by a single layer of cuboidal epithelium. The layer of connective tissue that forms the choroid plexus contains an abundance of vessels and is also referred to as tela choroidea. Approx. 500 mL of cerebrospinal fluid is produced per day.

N.B. The choroid plexus is found in all the four ventricles, but not inside the anterior and posterior horns of the lateral ventricles.

The subarachnoid space shows numerous extensions that are also referred to as cisterns carrying the cerebrospinal fluid. The most important cisterns in this context include the cisterna cerebellomedullaris (= cisterna magna), the cisterna ambiens, the cisterna interpeduncularis, and the cisterna chiasmatica. 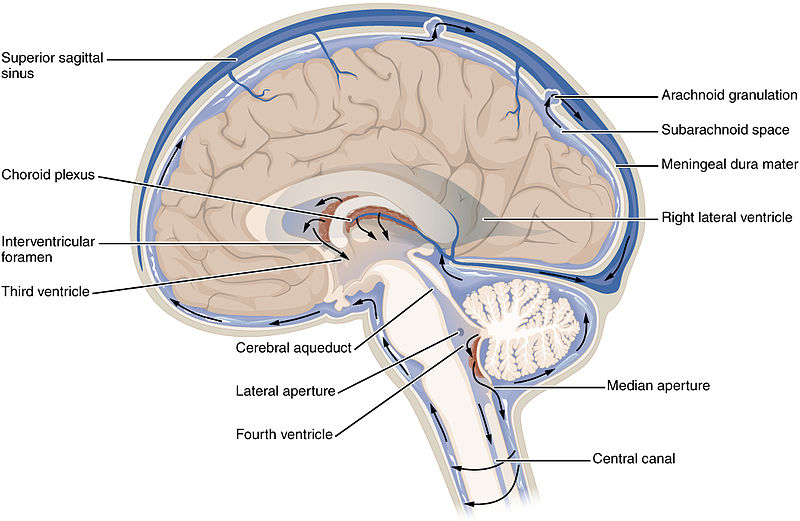 The CSF is produced by the choroid plexuses and flows from the lateral and third ventricles to the fourth ventricle through the cerebral aqueduct. It later enters the cisterna magna via the median aperture of Magendie and the lateral apertures of Luschka. CSF then proceeds to circulate around the spinal cord and brain in the subarachnoid space, to later be drained in 2 ways. First, the cerebrospinal fluid flows across the arachnoid granulations (= Pacchioni granulations) into the venous plexus or the lymphatic system. Second, it is drained via the exits of the spinal nerves. The primary drainage, however, is via the arachnoid villi or granulations. The entire cerebrospinal fluid (approx. 150 mL) is exchanged twice to 4 times a day in this cycle.

The foregoing choroid plexus belongs to the group of circumventricular organs or ependymal organs. These regions are unique in that they usually do not contain a blood-brain-barrier.

Tissue Barriers inside the Brain

The tissue barriers of the brain protect the organ from harmful substances in the blood, including those caused by iatrogenic interventions or drug treatments. 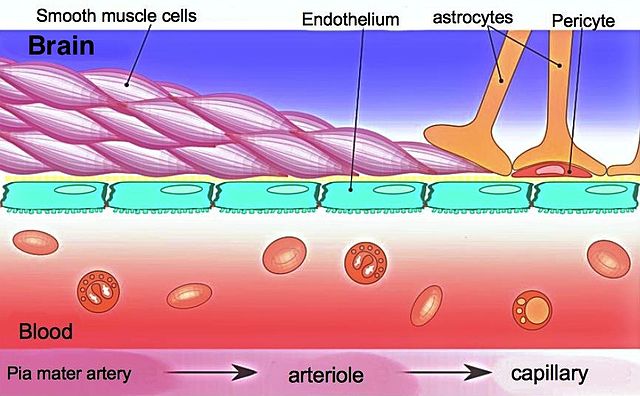 The blood-brain-barrier is absent in the circumventricular organs (see above) because of the fenestrated capillary endothelium. In such areas, a blood-liquor-barrier is formed (see below) to still separate the brain tissue from the cerebrospinal fluid.

The specialized ependymal cells of the choroid plexus are connected to each other via ‘tight junctions’ resulting in a barrier between blood and cerebrospinal fluid in that area, but not between cerebrospinal fluid and CNS. This barrier can only be penetrated by a few substances such as water, oxygen or carbon dioxide.

Diseases of the Ventricular System 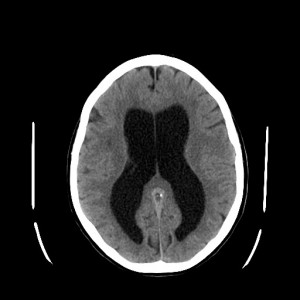 Image: CT-scan of the Brain with Hydrocephalus. By Lucien Monfils, License: CC BY-SA 3.0

The physiological constrictions within the ventricular system such as the aquaeductus mesencephali or the apertures of the 4th ventricle are particularly vulnerable to drainage failure. A constriction may be triggered by tumors, bleeding as well as inflammation. Based on the pathogenesis, this type of hydrocephalus is also referred to as hydrocephalus occlusus.

An enlarged subarachnoid space (hydrocephalus externus) occurs especially during physiological aging and subsequent atrophy of the cerebral parenchyma. In this type of hydrocephalus, which is also referred to as hydrocephalus e vacuo, there is no increased cerebral pressure.

Increased secretion of cerebrospinal fluid can cause hydrocephalus, and is also known as hydrocephalus hypersecretorius. The over-production of cerebrospinal fluid can be triggered by the irritation of the plexus epithelium, for instance, as a result of inflammation. Clinically, symptoms such as headache, vomiting or nausea may appear due to the increased cerebral pressure.

By contrast, normal pressure hydrocephalus is not characterized by increased cerebral pressure. Instead, this type of hydrocephalus results in the typical clinical triad (Hakim’s triad) of gait disorder, urinary incontinence, and dementia.

Therapy focuses on the elimination of possible reversible causes, i.e., inflammation, as well as avoidance of constrictions eventually. Shunting is another therapy in which the cerebrospinal fluid is artificially drained from the ventricular system inside the peritoneal space (ventriculoperitoneal shunt), for instance, or inside the right atrium (ventriculoatrial shunt). Shunting is indicated in cases of pediatric hydrocephalus or normal pressure hydrocephalus.