Image: “Posterior and Lateral Views of the Neck” by PhilSchatz.com. License: CC BY 4.0

The Superficial (Platysma) of the Ventral Neck Muscles

The platysma belongs to the subgroup of muscles supplied by the cranial nerves and covers almost the entire anterior surface of the neck. It originates from the fascia covering the pectoralis major and deltoid. Therefore, the platysma is in contact with the shoulder girdle and thorax and so has a major impact on the associated osseous structures.

The platysma’s base runs caudally to the oblique line of the mandible. Additionally, fibrous elements can insert in the mentalis muscle or the depressor anguli oris muscle. Therefore, functionally, the platysma belongs to the mimic muscles. 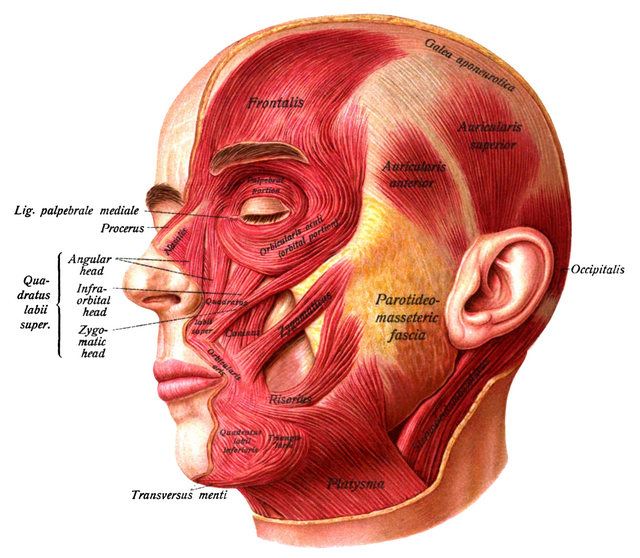 Image: Muscles of the face.

The Prevertebral Muscles of the Ventral Neck Muscles

The prevertebral muscles belong to the group of ventral neck muscles. They include the rectus capitis anterior, the longus capitis, and the longus colli that are located in pairs on the left and right side of spine. They rest directly on the spine, creating the deepest layer and connecting the vertebral bodies to transverse processes of the cervical spine as well as the basilar occipital bone on the ventral side.

In a pathologic hyperextension, the prevertebral muscles are massively irritated, such as during a whiplash, which often results in painful contractures. It is very difficult to treat. 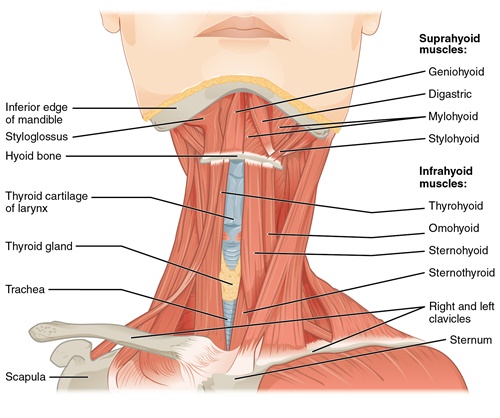 Image: ‘Muscles of the anterior neck’ by PhilSchatz.com. License: CC BY 4.0.

The rectus capitis anterior arises from the massa lateralis atlantis and inserts at the basilar ossis occipital. Due to its course, it supports the head when leaning forward. It is innervated by the cervical plexus (C1).

The longus capitis originates from the anterior tubercles of the transverse processes of C3–C6. Its base is identical with that of the rectus capitis anterior (basilar ossis occipital). Thus, its function is also the same—to bend the head forward. This muscle can also cause lateral flexion of the head due to the unilateral innervation by the cervical plexus (C1–C4).

The scalene muscles (scalenus muscles) of the ventral neck muscles

In retroversion of the arm, incarceration of these sensitive structures can occur when the convergence of the osseous starting points is too strong. These symptoms can be treated by manual therapy or physical therapy.

Regarding the function of the scalene muscles, physicians should know that most textbooks describe these muscles as auxiliary muscles of inspiration even though they are already activated during normal inspiration by the fixing and raising of the ribs. 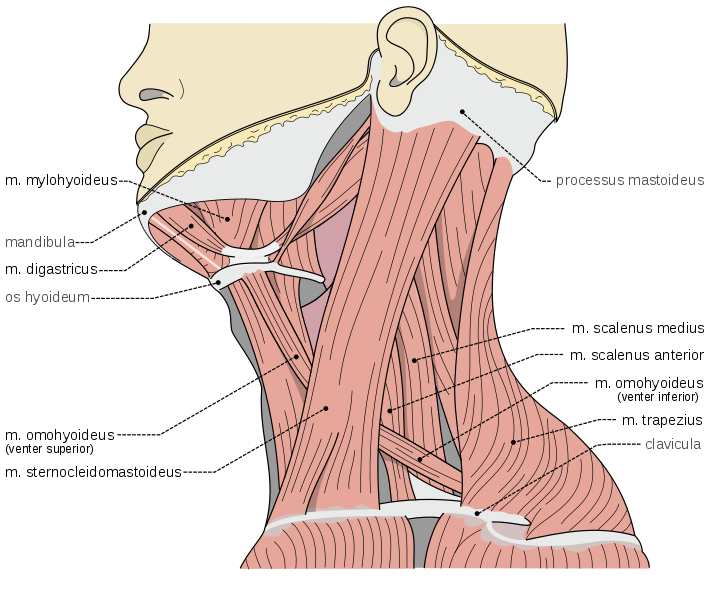 The origins of the scalenus medius muscle are the posterior tubercles of the C1/2–C7 transverse processes and its base is in the dorsal direction from the sulcus arteriae subclaviae of the first, and proportionate to the second rib. In a unilateral innervation through the cervical plexus (C3/4–C8), a lateral flexion of the cervical spine takes place, resulting in the raising of the first rib as well as the second rib proportionately during bilateral innervation.

This muscle is not always used and has its origin at the anterior tubercle of the C6/7 transverse process. It inserts on the inner edge of the first rib dorsal of the anterior scalene muscle and the pleural cupula, which stabilizes the muscle functionally and, therefore, belongs to the inspiration muscles. Furthermore, it supports the lateral flexion of the cervical spine. Its innervation is affected by the cervical nerve VIII (C8).

There are other major muscles located in the area of the ventral neck that are assigned to other muscle groups. In the pre-clinic examination (preliminary examination) the sternocleidomastoid muscle and the rectus capitis lateralis are listed as ventral neck muscles due to their localization, even if they are assigned to different subgroups.

The rectus capitis lateralis belongs to the subgroup of secondary respectively immigrated ventrolateral muscles, while the sternocleidomastoid muscle, part of the head muscles subgroup with a base on the shoulder girdle, belongs to the cranial nerve-supplied muscles.

The rectus capitis lateralis muscle evolutionarily complies with the anterior intertransversarius muscle. Its origin is the processus transversus atlantis and it inserts at the pars basilaris of the occipital bone, lateral to the occipital condyles. The cervical plexus (ramus ventralis C1)–mediated innervation results in lateral flexion in the atlanto-occipital articulation.

It is innervated by the spinal accessory nerve (cranial nerve XI). In a unilateral innervation, the cervical spine and the head are laterally inflected as well as rotated to the opposite side. During a bilateral innervation, the head joints are dorsally extended and, therefore, the head is raised. In some sources, the sternocleidomastoid muscle is called the “head-nodder,” which is wrong, because it has no maximally inflected component.

Therefore, the function of this muscle is a popular examination topic in medical studies as well as in the training of physical therapists. Furthermore, it is a breathing auxiliary muscle on inspiration during bilateral innervation.