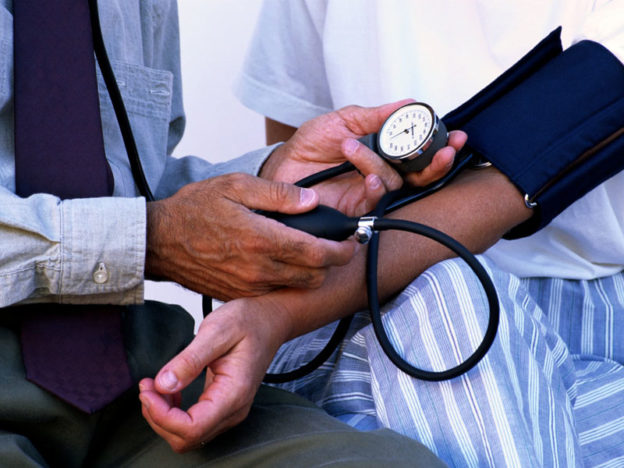 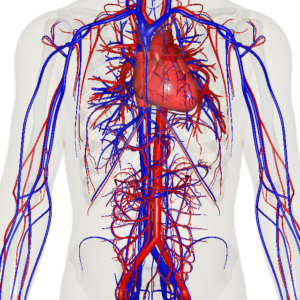 Image: “Stationary View of the Heart, Veins, and Arteries of the Human Body.” by BodyParts3D/Anatomography – Anatomography. License: CC BY-SA 2.1 JP

They serve as reservoir vessels owing to their increased capacitance. During the resting state, when there is a low demand for blood, the surplus blood is stored in the veins. Most capillary beds are closed and thus, more blood sweeps into the venous system.

When venous capacity decreases due to external or internal factors, venous pressure increases and causes an increase in venous return. 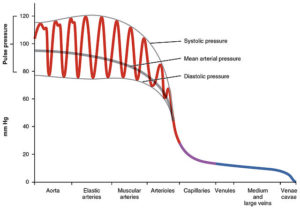 The smooth muscle layer of the veins is abundantly supplied with sympathetic nerve fibers. Sympathetic stimulation of vascular smooth muscle leads to vasoconstriction. A decrease in the diameter of the veins causes a decrease in capacitance and an increase in venous pressure and peripheral resistance. This increases the pressure gradient and in turn, increases venous return to the heart. 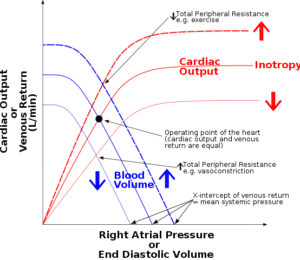 Sympathetic stimulation not only causes vasoconstriction but also increases the force of cardiac contractility and heart rate. As ventricles pump blood with greater force, the stroke volume increases and in turn decreases the pressure in the right atrium. Blood moves down the pressure gradient and venous return increases. This phenomenon is often referred to as the ‘suction effect.‘

A decrease in cardiac output increases atrial pressure. This causes the backflow of blood into the vena cava causing an increase in central venous pressure and a decrease in the pressure gradient.

An increase in the total blood volume during renal failure or during the activation of the renin-angiotensin-aldosterone system increases average venous pressure.

Central venous pressure (CVP) is measured by dividing the blood volume (ΔV) by compliance (Cv) of the thoracic veins  and can be represented as follows:

Many of the large veins of the lower limb lie between bulky skeletal muscles. Physical activity causes contraction of the calf muscles, which exerts external pressure on the veins, decreases capacitance, and increases venous pressure. Blood then moves down the concentration gradient, i.e. towards the heart.

The pressure caused by muscle contraction is responsible for the opening of venous valves in the lower limb, above the level of the muscles. The valves lying below the skeletal muscles remain closed due to low blood pressure in that region.

The gastrocnemius is a powerful calf muscle, which effectively increases venous return during physical activity. It is therefore referred to as the ‘second heart.’ 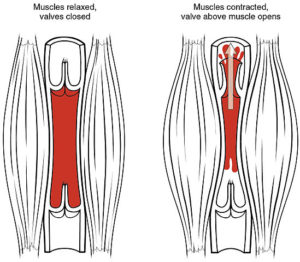 Large veins of the body are equipped with one-way valves at a distance of every 3–4 cm. When pressure is applied at the center of a vein, blood is displaced in both directions.

However, due to the presence of valves, blood does not flow in both directions. The valve lying above the pressure point opens due to increased blood pressure, which leads to blood flow in one direction, i.e. towards the right atrium. The valve lying below the pressure point closes. The structure of a valve is such that pressure applied from above causes its leaflets to close.

During inspiration, the ribcage moves upwards and outwards while the diaphragm moves downward. This decreases intra-thoracic pressure and increases intra-abdominal pressure.

During this process, a pressure gradient is created, which allows blood to move towards the thorax. This mechanism, known as the ‘respiratory pump,’ facilitates venous return.

During the sitting or supine positions, the effect of gravity on the column of blood in vessels is minimal. However, prolonged periods of standing or sitting cause pooling of blood in the veins of the lower extremities. Blood capacitance increases, which reduces central venous pressure and venous return.

In the upright (orthostatic) position, calf muscles contract causing an increase in blood pressure in the specified venous column. This movement creates a pressure gradient, causing blood to return to the heart.

As discussed, CVP is an estimation of the blood in the right atrium. It may be raised in right-sided heart failure or volume overload.

Jugular venous pressure (JVP) is the clinical measurement of blood pressure in the internal jugular vein. It is raised in right heart failure. JVP is easier to measure compared to CVP.