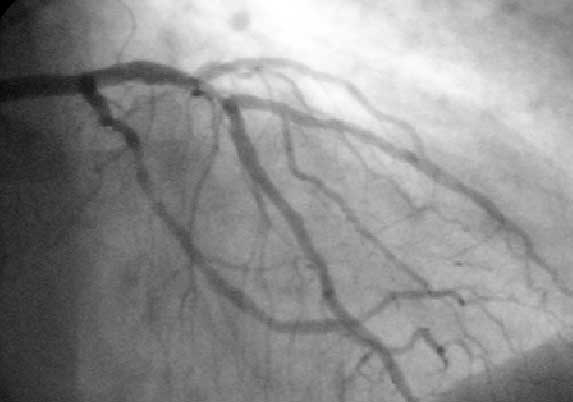 A sudden coronary artery spasm leading to a reduction in coronary blood flow and causing severe chest pain (angina) at rest is called vasospastic, Prinzmetal, or variant angina. This type of angina occurs at rest, rather than on exertion, without any initiating factors.

Usually, a cardiovascular event is associated with the atherosclerosis of a major coronary artery but, in this case, the causative mechanism is ‘vasospasm’ which may or may not occur at the site of atherosclerosis. Multifocal spasms can also occur in the coronary system. An ECG at the time of the chest pain due to vasospastic angina may show ST-segment elevation.

Vasospastic angina is an uncommon cause of myocardial ischemia, responsible for approx. 5% of angina cases. Patients are generally younger than those with stable or unstable angina secondary to coronary artery atherosclerosis. Variant angina more commonly affects women.

This syndrome has a higher incidence in Japan, compared to Western countries. The overall incidence has decreased significantly over the past 30 years. It is believed that this decline is because of the increased use of calcium antagonists to treat hypertension.

Vasospastic angina is caused by the spasm of the coronary arteries, which are the arteries supplying the heart. Coronary artery spasm can occur as a result of various risk factors, such as stress, smoking, cocaine use, insulin resistance, and medications that have the effect of constricting blood vessels, such as triptans.

Rarely, coronary artery vasospasm may be triggered after coronary artery bypass surgery or near a drug-eluting stent. Generally, the specific trigger is unknown. Many patients do not usually display classical coronary risk factors, apart from heavy smoking.

Rarely, variant angina is associated with systemic vasomotor disorders such as migraine and Raynaud’s phenomenon. This suggests the presence of a general vascular disorder.

Pathology and Pathophysiology of Vasospastic Angina

The underlying mechanism causing vasospasm in vasospastic angina is debatable, and many theories have been put forward in recent years. Vasospasm occurs in response to local vasoconstrictor stimuli in the coronary segment. Impaired regulation of myofibril contraction in the smooth muscle cells of coronary vessels causes smooth muscle hyperactivity, resulting in vasospasm.

Other abnormalities of the endothelium, such as defects in the enzyme – endothelial nitric oxide synthetase – can lead to reduced levels of nitric oxide. Nitric oxide is a natural vasodilator, and its decreased synthesis can lead to vasoconstriction. Current studies also show that coronary artery vasospasm can result from the impairment of K+ ATP-dependent channels and hyperactivity of an intracellular enzyme – Rho-kinase.

Sudden vasoconstriction resulting from any of the aforementioned phenomena leads to decreased coronary blood flow which causes myocardial hypoxia and triggers angina. 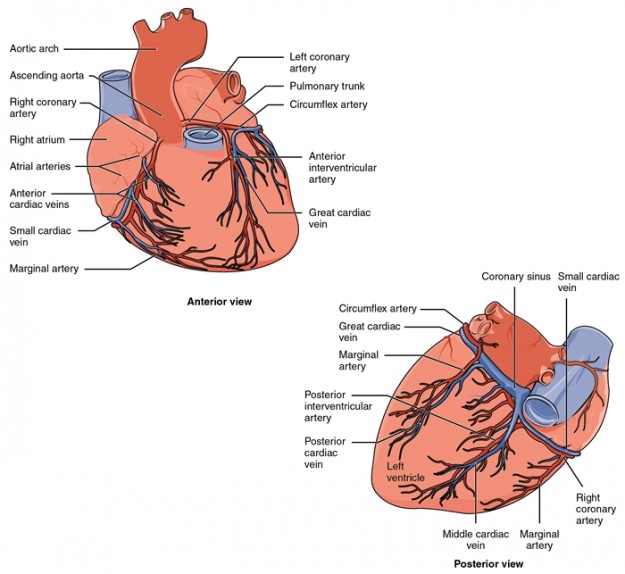 One important mechanism is related to decreased nitric oxide production by the dysfunctional endothelium, which is normally produced from L-arginine by endothelial nitric oxide synthase. As nitric oxide has potent smooth muscle relaxation and vasodilator effects, reduced levels can contribute to vasoconstriction. Increased activity of phospholipase C has also been reported, which is an enzyme that mobilizes intracellular calcium and may cause smooth muscle contraction.

Another theory is that repeated episodes of coronary vasospasm may cause neointimal hyperplasia, contributing to stenosis in the artery. Rho-kinase is also believed to play a role in the pathogenesis of this condition, being involved in regulating vascular smooth muscle contractility.

It is important to note that patients with the variant coronary syndrome may have significant atherosclerosis of their coronary arteries. However, the episodes of pain they experience are not related to increased oxygen demand (which occurs with changes in activity, heart rate, or blood pressure).

Other factors that have been suggested to contribute to the pathogenesis of coronary artery spasm include autonomic nervous system dysfunction, magnesium deficiency, chronic low-grade inflammation, and increased oxidative stress (with smoking). Genetic factors may be involved, as there is a 3-fold greater incidence in Japanese people, compared to Caucasians. It is possible that certain genetic mutations predispose to coronary artery spasm, such as those affecting the endothelial NOS gene.

Patients experience very severe central chest pain, which is the same type of pain in classic angina. These attacks tend to happen at rest, or during normal activity, but some patients may also experience these attacks during or after exercise, including those who have coexisting fixed coronary artery stenosis.

Patients typically experience attacks of angina in clusters, from midnight to early morning (midnight – 8.00 am). Patients with the variant coronary syndrome may also experience asymptomatic ischemic episodes. If coronary artery spasm causes a prolonged disturbance of coronary blood flow, it can cause a myocardial infarction.

Syncope may also occur if there are disturbances of heart rhythm, such as asystole, atrioventricular block, or ventricular tachyarrhythmias. Fatal arrhythmias and sudden cardiac death can also occur.

Diagnosis can be confirmed by an ST-segment elevation (> 1 mm) on the ECG recorded immediately after or during chest pain. A 24-hour ambulatory ECG recording is performed to identify any ECG changes in order to rule out angina pectoris. Holter monitoring for 24 hours can even detect any silent ischemic episodes occurring during the day. 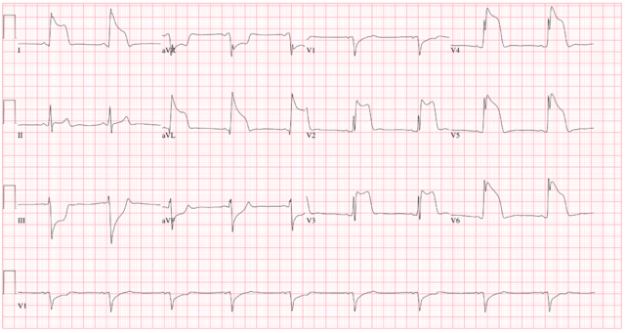 Image: ECG of a patient with Prinzmetal’s angina. By Gogradgme, License: CC BY-SA 3.0

Other changes in ECG that may be detected include a taller T wave, a taller and wider R wave, and loss of the S wave. Occasionally, negative U waves may present in the same leads as the ST-segment elevation, after the ST elevation starts to resolve. In addition, arrhythmias may be detectable during an episode of variant angina, such as ventricular tachycardia, atrioventricular block, and bradyarrhythmia.

If silent episodes of coronary spasm or arrhythmias are suspected, ambulatory electrocardiographic monitoring with a Holter monitor should be utilized. This is also helpful for recording ECG changes during symptomatic episodes.

Intravenous ergonovine test: Non-invasive induction of vasospasm can be achieved by the administration of ergonovine intravenously with 12-lead ECG monitoring. ST-segment elevation and induction of angina confirm vasospastic angina.

Exercise testing with ECG monitoring has variable results. Changes that can be detected in response to exercise include ST elevation, ST depression, or no change. ECG changes may point to fixed artery stenosis, coronary artery spasm, or an absence of problems.

In many cases of variant angina, there is usually an absence of organically stenosed arteries detected on an angiography. However, some patients have coronary artery stenosis coexisting with coronary artery spasm.

Provocation testing can be used for the definitive diagnosis of the coronary variant syndrome. Coronary vasospasm can be provoked during an angiography by injecting acetylcholine and ergonovine into the coronary arteries.

With vasospastic angina, blood tests are generally negative for cardiac enzymes, including troponins and CK-MB.

In a few patients, variant angina may lead to complications, such as severe ventricular tachyarrhythmias or bradyarrhythmias, sinus arrest, or even AV block resulting from a severe ischemic episode following vasospasm. Sudden cardiac arrest, with or without syncope, can occur due to ischemia-induced ventricular fibrillation. Atherosclerosis can also occur later at the site of vasospasm leading to local coronary thrombosis.

Treatment and Management of Vasospastic Angina

Patients identified to have variant coronary syndrome should be started on treatment as early as possible. This is very important in order to prevent complications such as myocardial infarction, serious arrhythmias, and cardiac death. In the acute setting, nitrate can be administered to relieve an attack of angina. In the long-term setting, patients who smoke are strongly advised to stop smoking.

The main drug used to treat variant coronary syndrome is a calcium channel blocker such as diltiazem. Calcium channel blockers are very effective in the prevention of ischemia. They may be given alone or together with isosorbide mononitrate, a long-acting nitrate. Beta-blockers are contraindicated as they reduce the dilatation of the smooth musculature by blocking the β2 receptors and would, therefore, further increase the tone of the coronary vessels.

It has also been suggested that a statin can be given alongside a calcium channel blocker to suppress acetylcholine-induced coronary artery spasm. Statins achieve this effect by inhibiting the Rho-associated kinase pathway.

If a patient experiences arrhythmias secondary to the effects of coronary vasospasm, a pacemaker or automatic defibrillator may be needed.

A person should also:

Cardiac stress tests or an ECG of the heart’s function during exercise.

Progression and Prognosis of Vasospastic Angina

If the condition is controlled from early on, it can have a favorable prognosis. Complications such as acute myocardial infarction, coronary artery bypass grafting, and cardiac death, typically occur early after the onset of angina. Patients who have coronary spasm in multiple arteries are prone to fatal arrhythmias.

Survival rates for vasospastic angina are over 90% at 5 and 10 years. Individuals, who do not have coexisting coronary artery stenosis, generally have a more benign prognosis and better survival than those who have severely diseased arteries and coronary artery vasospasm.