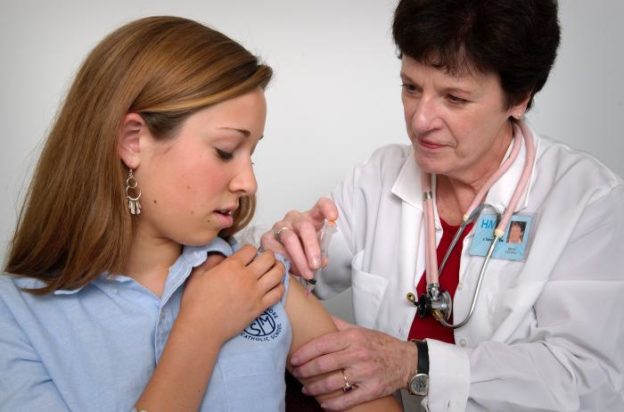 A vaccine is a substance that stimulates the production of antibodies and provides immunity against 1 or several diseases, prepared from the causative agent of a disease, its products, or a synthetic substitute, treated to act as an antigen without inducing the disease. A vaccine induces protection by utilizing pre-existing components of the immune response or by inducing the generation of antigen-specific memory cells.

Both the innate and adaptive immune subsystems are necessary to provide an effective immune response to an immunization. Further, effective immunizations must induce long-term stimulation of both the humoral and cell-mediated arms of the adaptive system by the production of effector cells and memory cells.

At least 7 different types of vaccines are currently in use or in development that produces this effective immunity and have contributed greatly to the prevention of infectious disease around the world.

General requirements for a successful vaccine

Carrier: provides helper T cell epitopes, the part of an antigen molecule to which an antibody attaches 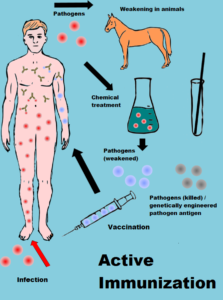 Image: “This scheme illustrates the process of active immunization and depends on the original artwork of Invexis.” by KoRe78. License: CC BY-SA 3.0

Active immunization involves the generation of acquired immunity by the application of antigens in the form of:

Because memory cells are already present as a result of vaccination, a secondary immune response occurs on the 1st encounter with the pathogen.

Inactivated vaccines are weakly immunogenic, which is why multiple applications of the vaccine, as well as regular booster vaccinations are necessary after successful basic immunization in order to achieve adequate vaccination protection. In addition, they are low in side effects. Undesirable accompanying reactions are mainly due to the addition of adjuvants (see below).

The simplest way of producing dead vaccines is the cultivation of pathogens on specific culture media (bacteria) or within cell cultures or incubated chicken eggs (viruses), followed by physicochemical purification and inactivation by heat or formaldehyde. The full vaccines obtained in this way have antigenic structures of the pathogen (e.g., rabies vaccine human diploid cell (HDC) and cholera).

In contrast to full vaccines, subunit vaccines contain pathogen antigens which can be isolated from cultures by purification procedures or can be produced specifically using recombinant DNA technology (e.g., capsular polysaccharides of Haemophilus influenzae type B, pneumococci, meningococci, and typhoid). 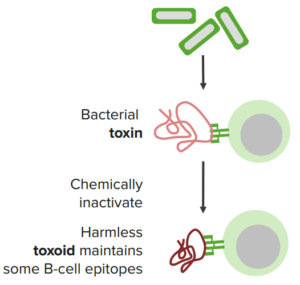 Purified toxins, which are (formalin) inactivated for testing purposes (toxoids), are called toxoid vaccines. Examples are the vaccines against tetanus and diphtheria.

Polysaccharides produce a weak immunological response based on the T cell-independent activation of B cells. In order to ensure lasting immunity with the formation of immunoglobulin G (IgG) and immunological memory cells, vaccines have been developed which, by the coupling of polysaccharides to proteins, elicit T cell-dependent B cell activation (so-called conjugate vaccines). Conjugate vaccines are available against pneumococci (Prevenar®), group C meningococci, and H. influenzae type b (Hib).

Because of the low immunogenic potency of many dead vaccines (e.g., toxoid vaccines), active enhancers (e.g., aluminum hydroxide) are added to the purified excitatory antigens which non-specifically enhance the immune response. This is essentially achieved by a locally-induced inflammatory reaction, which leads to an increased migration of macrophages, T and B lymphocytes to the site of the pathogen application.

Live vaccines are attenuated pathogens in their pathogenic effect (virulence). Most live vaccine strains have been long known. Their pathogenicity loss is due to spontaneous mutations which have developed under the repeated passage of animal host organisms or suitable cell lines.

The reproducibility of the apathogenic pathogens in the vaccinated person leads to a pronounced immune reaction with the formation of long-lasting immunity. The prerequisite is a functioning immune system since the otherwise unbridled proliferation of the pathogen with the formation of possible vaccination complications can occur. Therefore, live vaccination should not be performed on:

For human immunodeficiency virus (HIV) there is a vaccination recommendation for live vaccination, as long as there is no immunosuppression, measured on the cluster of differentiation 4 (CD4+) cell count (see the website of the Robert-Koch-Institute). 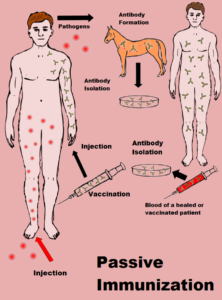 Image: “This scheme illustrates the process of passive immunization and depends on the original artwork of Invexis.” by KoRe78. License: CC BY-SA 3.0

Side Effects of Preventive Vaccinations 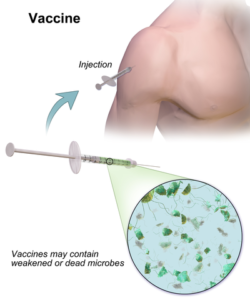 Regardless of the vaccine used, as a result of the immunological response of the vaccine, unpleasant but harmless vaccination reactions can occur which typically develop within the 1st 3 days after vaccination. Frequently occurring complaints are local inflammatory reactions (redness, swelling, and pain) in the area of injection. More rarely, there is a fever, muscle and joint pain, fatigue, and/or flu-like symptoms.

A diminished form of the disease (e.g., vaccination measles and arthralgia in rubella vaccination) is also possible in live vaccinations.

Vaccine complications are vaccine-specific side effects that go beyond the normal and expected vaccination reactions. Their probability of occurrence is very low; data are often based on individual case reports. Regarding the doctor’s duty to inform the patient, however, they are significant.

By breeding various vaccines in incubated chicken eggs (measles, mumps, influenza, and yellow fever), traces of protein can be present in the vaccines. However, these are usually so marginal as a result of the purification that there is no concern about the administration in patients with a chicken protein allergy. According to the Standing Committee on Vaccination (STIKO) Recommendation (2007), contraindication only applies to influenza and yellow fever vaccination.

Need for New and Improved Vaccines

The BCG vaccine for tuberculosis (TB) 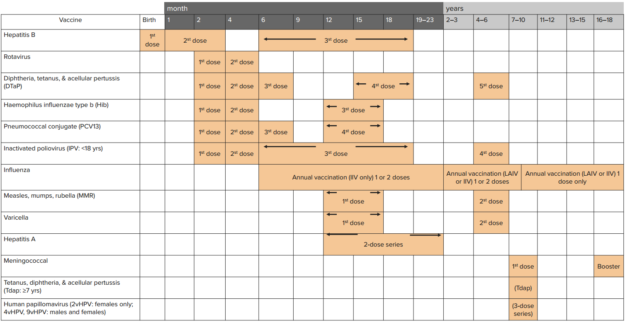