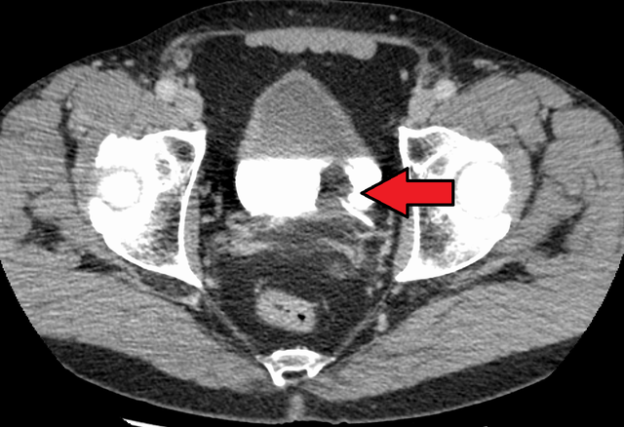 Image : “Transitional cell carcinoma of the bladder. The white in the bladder is contrast.” by James Heilman, MD. License: CC BY-SA 4.0

While the bladder is elastic and can expand considerably as it gets filled with urine, the third layer of smooth muscle makes the bladder capable of contraction when needed. Bladder cancer typically arises from the innermost layer of urothelial cells and can be classified into superficial or invasive carcinoma.

The prostate is found below the urinary bladder and it surrounds a part of the urethra known as the prostatic urethra. This explains why prostatic hypertrophy, or the presence of a prostatic mass, causes urinary symptoms such as urgency, frequency, post-dripping, or even urinary obstruction. The prostate is surrounded by a capsule and is near the rectum; hence, it can be palpated by digital rectal examination. Up to 95% of prostate cancers are adenocarcinoma. The rest are found to be of urothelial cell origin, i.e. transitional cell.

Epidemiology of Bladder and Prostate Cancer

Note: The diet, smoking and drinking habits, environmental exposures, and genetic predisposition seem to play an important role in explaining the ethnic differences in the incidence of bladder cancer.

American Indians seem to have the lowest incidence of bladder cancer, i.e. 2.6 per 100,000. The risk of bladder cancer is considerably higher in men. The male to female ratio has been estimated to be around 3 to 1. Up to 3.4% of men are expected to develop bladder cancer in their lifetime.

Ethnic differences in prostate cancer incidence exist. African-Americans have a mortality rate that is twice what is found in whites. The prognosis of prostate cancer is dependent on the Gleason grade.

Pathophysiology of Bladder and Prostate Cancer

Bladder cancer arises from transitional cells which compose the urothelial innermost layer of the bladder; therefore, the most common type of bladder cancer is urothelial. Adenocarcinoma, squamous cell carcinoma, leiomyosarcoma, and rhabdomyosarcoma are rarely seen in the bladder. Genetic alterations in chromosome 9 and the cyclin cycle regulatory protein have been found in urothelial cancers of the bladder. Over-expression of vascular endothelial growth factor has been also reported.

The over-expression of this factor explains why such tumors are usually rich in blood vessels. Protein p53 is also over-expressed in bladder cancer.

70% of prostate cancers are found in the peripheral zone. The remainder is distributed equally between the central and the transitional zones. In practice, multifocality is a common finding with prostate cancer and the involvement of multiple zones is quite often. The extension of prostate cancer is dependent on the location of the tumor. Tumors from the peripheral zone tend to invade the ejaculatory ducts and seminal vesicles. Transitional zone tumors typically invade the bladder neck. For unknown reasons, prostate cancer is more likely to spread to the bones before any significant lymphadenopathy even develops.

Grading and Staging of Bladder and Prostate Cancer

The national cancer institute has published a staging system for superficial and invasive bladder cancer. The following table summarizes the staging of bladder cancer:

The most important clinical finding in a patient with bladder cancer is hematuria. Suprapubic discomfort due to bladder irritation. Incomplete voiding feeling is commonly seen in patients with bladder tumors that invade the bladder neck.

Screening for Bladder and Prostate Cancer

The goal of screening in bladder and prostate cancer is to detect cancer at an early stage where surgical or radiological intervention might be curative. In the United States, screening of the general population for bladder cancer is not being performed. The main reason behind not recommending routine screening for bladder cancer is the fact that most patients can be adequately managed at the time of diagnosis. Additionally, screening of high-risk populations failed to show any added benefit, an increase in detection rate, or better outcomes.

Laboratory investigations are not very helpful in a patient suspected to have bladder cancer. Instead, one should opt for urine cytology looking for the presence of malignant or suspicious cells. The diagnosis of bladder cancer is usually confirmed by cystoscopy. Papillary tumors are generally resected via transurethral approach and later staged. In other kinds of tumors, the goal of cystoscopy is to simply obtain a biopsy for staging and histopathologic examination.

Because prostate cancer can be multifocal, multiple cores should be taken. A histopathologic examination is then performed to confirm the diagnosis and score the tumor based on the Gleason score. Bone scans and positron emission tomography are used to detect bone metastasis. Computed tomography scans of the pelvis and abdomen or magnetic resonance imaging studies are useful in detecting adjacent organ involvement.

Management of Bladder and Prostate Cancer

The mainstay treatment of bladder cancer is surgery, and surgery is usually the only curative treatment for early bladder cancer. The two most commonly performed surgeries are transurethral resection of bladder tumor (TURBT) and radical cystectomy with lymph node dissection. The decision to go to a minimally invasive approach such as TURBT is dependent on the absence of muscle layer invasion on staging. Patients with T4 stage tumors usually need radiotherapy. Patients with T4 stage tumors and distant metastasis usually go for radiotherapy alone.

Like bladder cancer, the treatment of prostate cancer is also dependent on the presence of metastasis. Patients without prostatic cancer metastasis might either go for prostatectomy or radiation therapy alone. High-risk patients with comorbidities should receive radiotherapy instead of surgery. Radiotherapy alone or prostatectomy are equally effective and curative for localized prostate cancer.