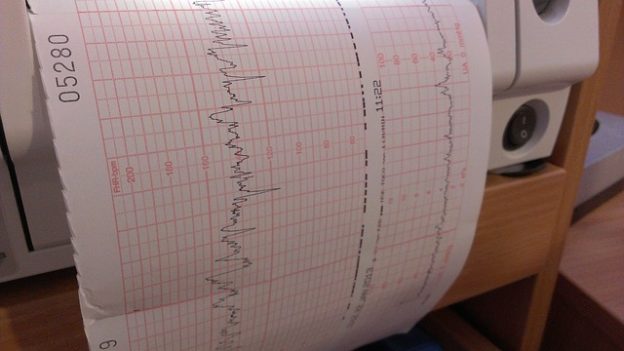 Diagnostic ultrasonography is an imaging technique used in clinical practice for the imaging of subcutaneous body structures, blood vessels, joints, and internal organs to exclude structural pathologies. This imaging technique is based on the utilization of ultrasound. The higher the frequency used in the ultrasound technique, the lower the wavelength and the lower the tissue penetration of the signal.

The ideal ultrasound examination is one in which the clinician interprets it in real time while it is being performed; therefore, physicians should observe ultrasound studies during the examination. Single static images can be captured. Cine images are video images that can be captured during real-time scanning.

Ultrasonography was initially developed as a military tool and was adopted by the medical world after World War II. In 1961, Schlegel et al first reported the usefulness of sonography in urology, for the detection of renal calculi.

The safety of ultrasound is:

Ultrasound compared to other diagnostic techniques:

When ultrasound is used for diagnostic purposes in clinical practice, one of four different modes can be utilized. Each ultrasound mode has advantages, specific indications and some drawbacks.

A-mode ultrasound is the simplest used technique. A single transducer is used which scans a line through the body tissue and the echoes obtained are plotted on the screen.

B-mode ultrasound utilizes a linear array of transducers that simultaneously scan a plane of the body to produce a two-dimensional image on a screen; therefore, most of the images you see in ultrasound reports are in B-mode.

A-mode ultrasonography is usually depicted as a function of depth and is very accurate in pinpointing a single point in depth; therefore, therapeutic ultrasound is based on A-mode.

M-mode ultrasound recognizes the motion of boundaries of a given structure. The M-mode images are produced from a serious of sequential B-mode acquisitions. M-mode ultrasound is sometimes used in combination with Doppler mode to visualize blood flow in veins, arteries or other structures such as the heart. Doppler ultrasonography utilizes the phenomenon known as the Doppler shift.

Reflection and Absorption of Ultrasound

“Transmission vs. Reflection of Sound. When there is an interface between two different types of tissues, some of the sound is reflected back and some is transmitted” Image created by Lecturio

Therefore, when visualizing the liver in a child, one aims to more absorption which can be achieved with a low-frequency transducer. On the other hand, the visualization of head and neck structures is better with high-frequency transducers. The use of higher frequencies in ultrasound usually results in a more detailed image.

A transducer is a device that is placed on the patient’s body to visualize a target that could be an internal organ, a joint, or a subcutaneous object such as muscle, tendons or subcutaneous fat. These transducers are found in linear probes, sectoral probes, or a convex probe. Linear probes are used when the access window is large, whereas the smaller convex probes are more appropriate when the access window is small.

A transducer is a device that is placed on the patient’s body to visualize a target that could be an internal organ, a joint, or a subcutaneous object such as muscle, tendons or subcutaneous fat. These transducers are found in linear probes, sectoral probes, or a convex probe. Linear probes are used when the access window is large, whereas the smaller convex probes are more appropriate when the access window is small.

Through a process called acoustic-electric conversion, the transducer transforms the sound energy into electrical energy. The electrical energy is processed by the computer in the ultrasound console to generate an image of minute white dots (pixels) corresponding to the returning signals. Displayed on a black background, the white pixels produce an image of assorted shades of gray.

The Other Components of the Ultrasonic Machine

In addition to the transducers, the ultrasonic device also consists of an inverter. The inverter is responsible for the conversion of electrical signals into ultrasonic vibrations. These vibrations are produced in an ultrasonic beam. This beam is focused by the application of ultrasonic lenses, mirrors and other more complicated techniques to have accurate targeting.
The ultrasonic machine also has some amplifiers to amplify the ultrasonic beam or the electronic signal. The inverter is also responsible for the conversion of the reflected pulses back into electronic signals which should be later amplified by the electronic amplifiers.

Apparently, these processes need very accurate control and a smart processing system, which is where the digital processors come into play. Finally, the ultrasonic machine has a display system that is used to plot the processed images.

In many cases, one is more interested in the flow of fluid from and towards the transducer rather than the mere structure of the examined organ or target. For instance, the blood flow through a hypertrophied left ventricular outflow or a stenosed valve can have a stronger clinical correlation rather than the mere size of the left ventricle or the surface area of the valve respectively. In that case, the Doppler effect is used to visualize how blood flows.

When blood is coming towards the inverter, the frequency received by the receiver is higher than what is transmitted. On the other hand, when blood is moving away from the inverter, the delivered frequency is higher than the received frequency. The differences in frequency are responsible for the Doppler shift which is depicted in red or blue depending on whether the fluid is coming to the transmitter or getting away from the transmitter, respectively.

“Doppler Effect. The change in sound frequency based on whether the object creating the sound is approaching or retreating from the object capturing the sound” Image created by Lecturio

Higher frequencies in ultrasonography are always beneficial in that they can produce more detailed images but this comes at the huge price of lower depth penetration; therefore, in children, the use of frequencies between 5 to 7 MHz is usually possible and the images are usually of a much better-detailed quality compared to adults where one is limited to frequencies below 5 MHz in most of the cases.

Body parts where the target is known to be more superficial, for instance, the thyroid gland in the neck, can be visualized with higher frequencies and of course better details compared to deeper structures such as the pancreas. A small trick to make it more possible to use higher frequencies is to decrease the distance between the transmitter and the target.
This can be achieved by using another route for the transmitter, such as endoscopy based ultrasonography of the pancreas, or the use of transvaginal ultrasonography for the visualization of the pelvic organs.

The axial resolution of the ultrasonic machine describes the ability to visualize the depth of the target. Axial resolution is always better than lateral resolution in ultrasonography; therefore, one can improve the visualization of thin blood vessels by making the probe oriented to the vessels so that blood flows across the ultrasound beam.

The last limitation to mention here is the fact that ultrasonography is an operator-dependent imaging technique. In contrast to computed tomography scans, X-rays or magnetic resonance imaging studies, ultrasonography images are largely dependent on the operator.

Note: If the operator is not experienced enough, the produced images will be of low quality and the information obtained from such images will be either insufficient to reach a diagnosis or might lead to a false diagnosis.

The velocity and angle of ultrasound wave propagation is affected by different tissue density, the rate of change in these tissue densities (abrupt or gradual), and the dimensions and configuration of the transducer. Such variations can lead to deviation of the ultrasound signals from the assumed direction of propagation, creating artifacts.

Kossoff cautions that a feature should not be considered by the examiner to be real simply because it is displayed sonographically until it is appropriately evaluated from various angles. Conversely, a feature that is not displayed is not necessarily absent.

Shadowing can occur due to intense reflectors, such as calcifications or air and increased through-enhancement is exhibited with fluid-filled structures such as cysts.

Reverberation is an artifact caused by the ultrasound signal striking a very echogenic surface near the ultrasound transducer. This signal has ricocheted back and forth between the transducer and the reflector.

An image representing the echogenic structure is accurately produced on the monitor, but each subsequent reflection of the sound wave back and forth, which takes twice as long to reach the transducer as the prior reflection, is interpreted by the transducer as another structure. This results in artifactual images, equally spaced, distal to the original reflector, and of decreasing intensity.

Lateral and anterior refraction also called dispersion or scatter, of the ultrasound signals is spread in a fan-like configuration away from the central portion of the image.