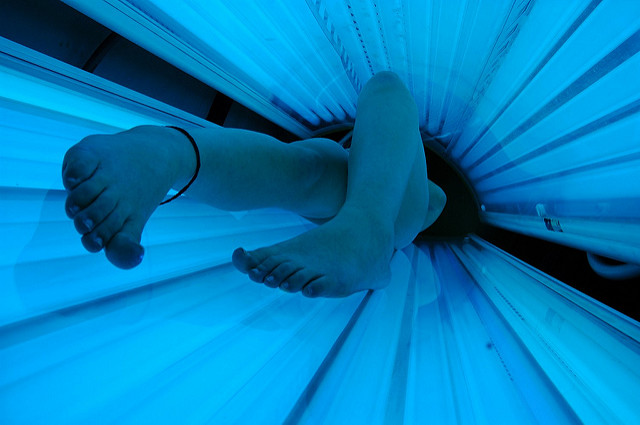 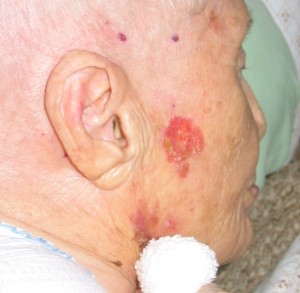 Basal cell carcinoma is the most common neoplasm of the skin. It is a nonmelanoma skin cancer (NMSC) that forms de novo from basal cells, which means that it is not based on a precancerous condition. Basal cell carcinoma solely affects the skin with hair and usually appears in areas exposed to ultraviolet (UV) radiation from the sun. The most common locations are the face, head, and neck: approximately 80% of all basal cell carcinomas appear on the connecting line between the corner of the mouth and the earlobe. 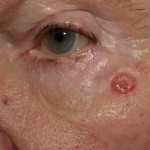 Based on morphologic features, there are various types of basal cell carcinoma: 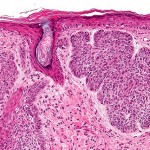 Basal cell carcinomas are curable and can be treated with topical medications, surgery, or other various therapies.

Surgical excision is the treatment of  choice after clinical and histologic confirmation of the diagnosis. The tumor is excised, adequate safety margins are obtained, and histologic follow-up of the cutting edges is performed. In areas where extensive excision is impossible for aesthetic reasons (i.e. the face), the tumor should be excised under constant intraoperative examination of the margins of resection (micrographic controlled excision). Mohs micrographic surgery is used for tumors that are difficult to excise.

Alternatively, superficial tumors may be treated with cryotherapy, photodynamic therapy, or local chemotherapy. In cases of inoperable basal cell carcinoma, radiotherapy is the treatment of choice. Furthermore, hedgehog pathway inhibitors were recognized in 2013 as alternative treatments for unresectable basal cell carcinoma. Arsenic trioxide and itraconazole are the hedgehog pathway inhibitors often prescribed.

Radiation therapy is used for older patients, and topical fluorouracil is used for the treatment of superficial basal cell carcinoma.

After curative therapy has taken place, yearly follow-ups are suggested because there is a high risk of developing further primary tumors.

Not the most common type of skin cancer but probably the most well known, malignant melanoma involves the malignant degeneration of melanocytes. It accounts for more than 90% of the deaths caused by skin cancer.

Note: Malignant melanoma, unlike basal cell carcinoma, often appears on areas of the body that are not exposed to sunlight.

Based on morphologic and histologic aspects, there are four types of malignant melanoma:

Metastasis of malignant melanoma can occur by lymphatic or by hematogenous spread. As a consequence of locoregional spread, metastases can appear elsewhere on the patient’s skin (satellite metastases). The liver, skeleton, and brain are among locations where distant metastases are commonly found.

The ABCDE mnemonic is a popular method for the early detection of melanoma. Nevi that meet one or more of the following criteria should undergo further evaluation with a reflected-light microscope (dermatoscopy).

If dermatoscopy confirms a primary tumor, complete surgical excision with adequate surgical margins (0.5 cm) is performed, and the excised skin undergoes a histopathologic examination. In the case of histologic confirmation of a malignant tumor, skin margins must be resected depending on the tumor thickness (see below) and depth of tumor invasion. A melanoma in situ (tumor does not penetrate the basal lamina) has to be removed, including a safety margin of 0.5 cm. For a melanoma that has grown across the basal lamina, the following safety margins apply (according to the S3 guideline):

Note: Breslow depth is defined as the histologically determined depth of infiltration in millimeters, starting from the granular layer of the epidermis. It is a determining criterion for the prognosis of the melanoma and defines the T stage of TNM classification.

The therapy of choice for malignant melanoma is surgical excision. Adjuvant therapy does not yield higher survival rates. However, patients with progressed tumor stages may benefit from adjuvant immunotherapy using interferon α. Any metastases should be treated with adequate methods (i.e. surgical resection, radiotherapy).

The latest innovation in melanoma therapy is immunomodulation. The monoclonal antibody ipilimumab was approved by the US Food and Drug Administration in 2011. Ipilimumab reinforces the body’s own immune reaction against tumor cells by blocking their receptors, which induces downregulation of the immune response. In this way, the tolerance that the body established against the growing tumor cells is impaired. A similar mechanism is used by the PD1-inhibitor nivolumab. According to current data from ongoing trials, the combination of nivolumab and ipilimumab seems to be promising, but it also shows significant adverse effects.