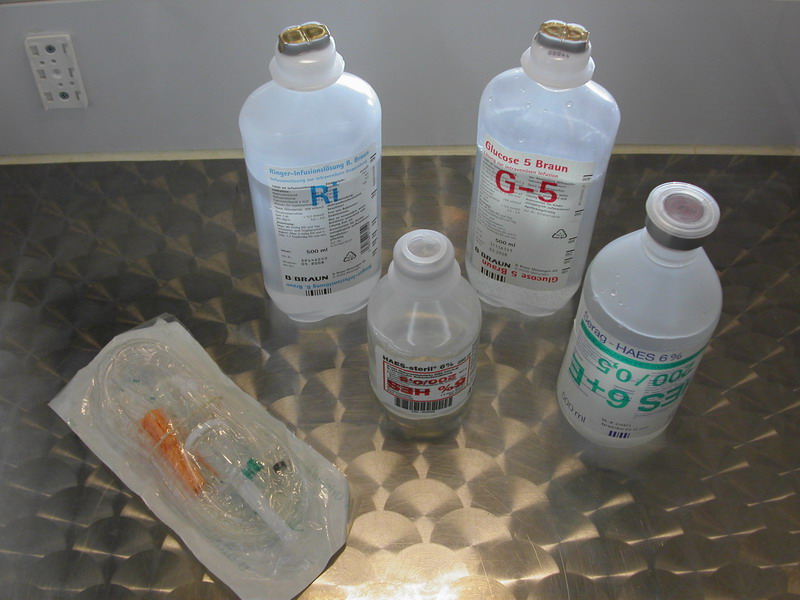 The hydrostatic pressure is necessary to counteract the process of osmosis.

The osmolar concentration of a solution, called osmolality, is expressed as osmoles/Kg of water.

This term refers to the difference in the osmolarity of two solutions on either side of a
semipermeable membrane.

Distribution of Fluids Within the Body

The interstitial fluid is comprised of electrolytes, amino acids, glucose, hormones, and various other products of metabolism. It is essential for the cells’ membrane potential as well as for moving substances back and forth between cells and blood vessels.

Intracellular fluid and interstitial fluid are separated by a relatively impermeable cell membrane, which allows water, but no other substances, to move across the membrane spontaneously. The interstitial space and plasma are separated by a capillary membrane, which is relatively permeable, allowing the molecules to easily move across the membrane.

An exception to this is albumin, an intravascular protein that does not move easily along the capillary membrane. It exerts osmotic pressure to keep the fluid within the blood vessels, protecting it from being drawn into the interstitial space. If this would happen, it would result in low blood pressure and extravascular fluid accumulation, which is edema if it is localized, and anasarca if it is systemic throughout the body. The osmotic pressure exerted by proteins, such as albumin, is called oncotic pressure.

Tonicity: This refers to the measure of the effective osmotic gradient between two fluids separated by a semipermeable membrane. It is influenced only by the solutes, which cannot cross the membrane.

Based on the tonicity, fluids are divided into three types: 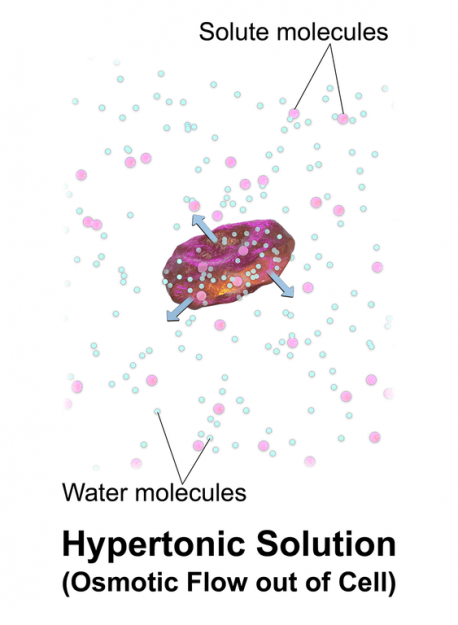 Image: “A red blood cell in a hypertonic solution, causing water to move out of the cell.” by BruceBlaus. License: CC-BY 3.0 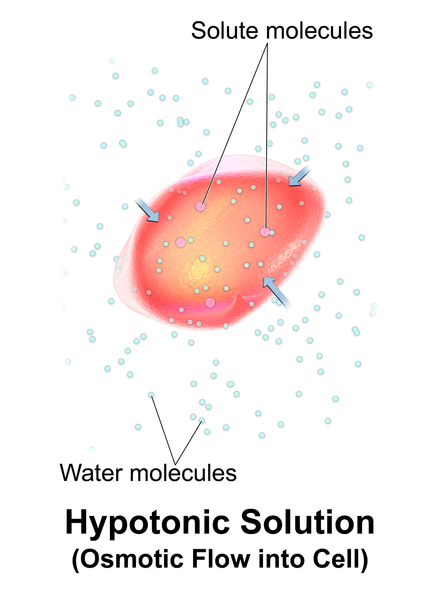 Image: “A red blood cell in a hypotonic solution, causing water to move into the cell.” by BruceBlaus. License: CC-BY 3.0 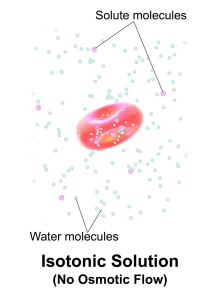 Image: “Depiction of a red blood cell in an isotonic solution.” by BruceBlaus. License: CC-BY 3.0

An isotonic solution has an effective osmolar concentration. Its solute concentration is not the same as the one inside the cell. In this case, the cell neither swells nor shrinks because there is no concentration gradient for water across the cell membrane.

The osmolarity of water is zero; an infusion of water causes an immediate decrease in plasma osmolarity, making the blood hypotonic relative to the RBC interior. There will be a flow of water into the RBC until the concentration gradient is the same. This results in the swelling of the RBC and eventual lysis.

Crystalloids contain organic or inorganic salts dissolved in sterile water. The most commonly used solutes in crystalloids are glucose and sodium chloride. Crystalloids are electrolyte solutions that have a relatively low tendency to cross plasma membranes.

Crystalloids, when administered in large volumes, can cause tissue edema (gastrointestinal). Infusion of large volumes of normal saline, even after correction of intravascular volume, can lead to a normal anion gap metabolic acidosis.

Ringer lactate is contraindicated in patients with:

D5W can cause pediatric death due to hyponatremia, caused by the excess administration of dextrose solution.

These are the electrolyte solutions, which have a relatively high tendency to stay intravascular. They contain large proteins that generally do not cross capillary walls.

Colloids are used as plasma expanders and are indicated in conditions such as burns, hypovolemic shock, trauma, and tissue damage. Colloids do not have the oxygen-carrying capacity. 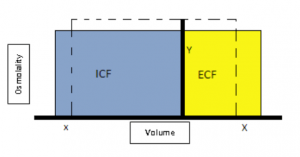 A Darrow-Yannet diagram: Osmolality on Y-axis and volume on X-axis. Source: Medceron/Lecturio