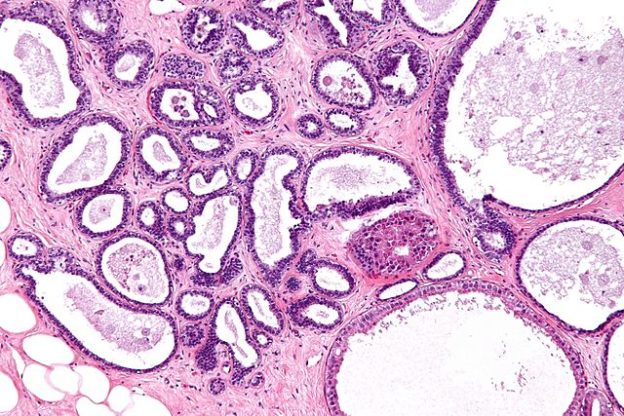 Fibrocystic change is a term that refers to the changes that happen to breast tissue as a woman ages. The normal histologic appearance of predominant ducts, lobules, intra-lobular stroma, and inter-lobular stroma is replaced by fibrous tissue and cystic formation. Since this condition occurs in up to 60% of women, the term fibrocystic disease is no longer used. The incidence of fibrocystic changes peaks in women aged between 40 and 45 years, at 430 per 100,000 women.

Fibrocystic changes are the most common benign breast lesion encountered in clinical practice. The estimated prevalence of fibrocystic changes is 60%. They occur in women aged 30—50 years and tend to resolve upon the onset of menopause, which suggests a connection to ovarian activity.

Causes and Physiology of Fibrocystic Changes

The female breasts are large modified sebaceous glands located bilaterally in the chest region. They are accessory reproductive glands that are tasked with lactation after childbirth. Each breast weighs 200—300 grams during the lactational period.

Anatomically, the breast extends from the 2nd to the 6th rib along the midclavicular line overlying the pectoralis major and serratus anterior muscles and their associated fascia. It is suspended in position by the Cooper’s ligaments. It has a lateral projection, known as the axillary tail of Spence. The remainder can be divided into four regions by two lines passing through the nipple in both horizontal and vertical outlines. Each region is known as a quadrant.
The gland structure is composed of 20% glandular tissue and 80% fat and connective tissue. It has 12—20 lobes, each with a single excretory duct known as a lactiferous duct that opens into the nipple. Milk secretion occurs in the columnar-lined alveolus that is surrounded by striated myoepithelial cells that contract during the milk secretion process.

Causes and pathogenesis of fibrocystic changes

Hormonal variation and influence during menstruation
Repeated exposure of the breast epithelium to estrogen and progesterone from the ovarian wall causes fluid cells and debris to accumulate within the breast. This repeated process over the course of several years results in fibrosis and cystic changes in the breast.

Note: Upon the onset of menopause, the hormonal trigger is cut off and the breast changes begin to resolve on their own. Other hormones, such as prolactin, growth factor, and thyroid hormones are thought to also influence the process.

Fibrocystic breast changes present with a variety of clinical findings, depending on the level of advancement at presentation and the clinician’s choice of investigation:

Though these are benign changes, most of the times they attract attention when they acquire features that would be suggestive of malignancy which include:

Breast pain, mastodynia, and mammalgia are usually cyclic and worse at the time of menstruation.
Mostly it is a bilateral involvement of a mass or pain that may be worse on one side but soon catches up with the other to become asymmetrical involvement.

Development of the cystic form

Fibrosis occurs on the cysts upon rupture and release of the secretory material into the adjacent stroma, leading to chronic inflammation and fibrous scarring. The adenosis variant presents with enlargement of the acini and increases in the number of acini per lobule.

Sclerosing adenosis increases the number of acini per terminal duct. The acini are compressed and distorted in the central portions but dilated in the peripherals. Also, there is some stromal fibrosis that may completely compress the lumen to create an appearance of solid cords of double strands of cells in the solid stroma.

The papilloma type is composed of multiple branching fibrovascular cores with a connective tissue axis lined by myoepithelial cells. Epithelial hyperplasia and apocrine metaplasia are also common in this type.

Breast self-examinations should be done each month after menstruation, which is technically five days after the last day of menstrual flow.
Clinical breast examination every six months.

Regular mammographic screening is done for all patients who are older and have less dense tissue and have a history of a lesion that may need close monitoring, such as a lump or discharge.

Breast ultrasound is the alternative of choice for younger women of reproductive age for whom x-rays may pose a risk and have more dense breast tissues that are better visualized using ultrasound.

Fine needle aspiration (FNA) is the next diagnostic or curative test for masses or lumps that are cystic in nature. The fluid is taken for cytology and observation by the histopathologist for analysis. It may be used as a curative method where the fluid in a cyst is drained away.

Core biopsy and histology is considered after inconclusive FNA findings or tissues that may need excision for a cure and further evaluation.

Breast MRI is an emerging method of investigation, especially for patients who cannot tolerate x-ray beams.

CT scan of the chest region is the imaging of choice to rule out advanced malignant processes.
Other laboratory tests (renal function tests and complete blood count) will facilitate the management of the patient, i.e., obtaining a baseline function that may be altered by toxic drugs.

Management of the changes is focused on the hormonal control of the influence via selective estrogen receptor modulators or surgically via hysterectomy, identification of the onset of malignant changes by biopsies, and radiological imaging. Morbidity is due to excessive pain and enlargement of the cystic lesions while mortality mainly arises from malignant transformation of the changes and development of breast carcinoma.

Due to the close correlation with a symptomatic presentation with breast carcinoma, it is prudent to surgically excise the mass for curative purposes and diagnosis with histological examination. It may take the form of breast-conserving surgery, mastectomy, or radical surgery. Hysterectomy may also be considered as part of hormonal therapy to cut off the ovarian source of the hormones.

Oral contraceptive pills are used to control irregular menstrual cycles. The formation of regular cycles allows for control of hormone-induced changes and recovery of the breast.

Use of selective estrogen receptor modulators (SERMs), such as tamoxifen, that selectively inhibit the effect of estrogen on breast tissue but spare other effects of estrogen in the body.

Lifestyle modification strategies, such as refraining from a high-salt diet and taking a diuretic drug at the end of every monthly cycle, will control the breast swelling with each menstrual cycle.
Avoid contact sports that could impact the breasts and induce further swelling.
Wearing a supportive bra of good quality will increase the patient’s comfort.

Course and Prognosis of Fibrocystic Changes

The changes generally run a predictable course and respond to any form of treatment, whether surgical or medical. Morbidity mainly comes from excessive pain from the gland and the formation of large cysts, requiring intervention.

Most of the cases heal spontaneously after menopause.

The most feared complication and the most common cause of mortality are the development of breast carcinoma. The condition is more common and feared among patients with benign fibrocystic breast changes since it is more difficult to detect in this group of patients.