Type 2 Diabetes Mellitus in Children — Screening and Treatment | Lecturio
Are you more of a visual learner? Check out our online video lectures and start your pediatric endocrinology course now for free! 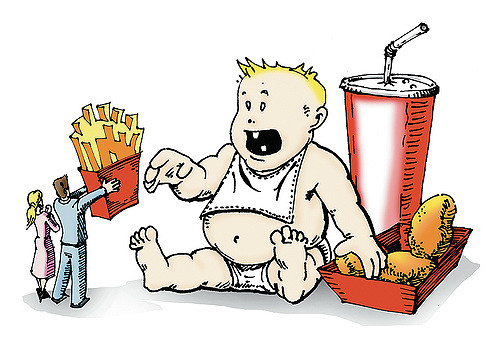 Type 2 diabetes mellitus is a condition characterized by various metabolic derangements, such as peripheral insulin resistance and hyperglycemia. It affects multiple system organs, including the cardiovascular system, the cerebrovascular system, the kidneys, liver, and eyes. These complications are responsible for an increase in patient morbidity and mortality.

In the past, type 2 diabetes was known as adult-onset diabetes because its incidence in children was rare. Today, however, type 2 diabetes mellitus is becoming more recognized in children. Increasing incidences are occurring worldwide; each nation has its own demographics on prevalence. 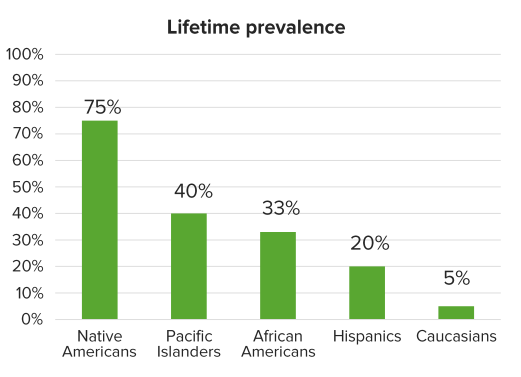 It is attributed to the physiological development of a state in which insulin resistance develops; thus, a child with other risk factors has a high chance of inadequate beta-cell function, leading to the development of type 2 diabetes mellitus.

Prognosis and Complications of Type 2 Diabetes Mellitus in Children

Additionally, hypoglycemia due to aggressive diabetic control is associated with cognitive and intellectual deficits in the future and should be avoided. In fact, some studies have claimed that recurrent and severe hypoglycemic episodes in children might be more hazardous to brain development than the natural history of the disease.

Acute complications of type 2 diabetes mellitus are more common in adolescents and teenagers. Diabetic ketoacidosis and hyperglycemic-hyperosmolar states are becoming more commonly recognized in children. Children with type 2 diabetes are also at an increased risk of developing dyslipidemia and hypertension.

Type 2 diabetes mellitus occurs when both insulin secretion and insulin inaction are present. Impaired insulin secretion and relative hypoinsulinemia are usually mild at disease onset, but they are clinically relevant since these patients show impaired glucose tolerance but not frank diabetes. Eventually, peripheral insulin action is impaired by insulin resistance, which is also worsened by dyslipidemia. Dyslipidemia is also becoming more severe as the disease progresses, causing a vicious cycle.

The liver is also sensitive to insulin under normal conditions, but this sensitivity is decreased in type 2 diabetes mellitus. This is associated with the liver’s increased glucose production and worsened hyperglycemia. At a certain point, the pancreatic beta-cells can no longer keep up with the demand for insulin due to severe insulin resistance. This insulin resistance, coupled with diminished beta-cell function, leads to frank type 2 diabetes.

The child’s ethnic background may be a significant clue towards the type of diabetes mellitus. African Americans, Asian Americans, and Native Americans are more likely to have type 2 diabetes than the general population. Studies have shown that, generally, children from minority groups have higher insulin levels than same-aged white children. It suggests that race predisposes people to develop diabetes due to higher chances of insulin resistance.

Children who are overweight, i.e., have a body mass index above the 85th percentile for age and sex, and two of the following characteristics should be screened for type 2 diabetes mellitus:

Screening children who meet the previously-mentioned criteria should commence by the age of 10 years, performed every two years, and be based upon a fasting plasma glucose test.

The goals of type 2 diabetes mellitus treatment in children are to maintain a fasting plasma glucose concentration below 126 mg/dl, resolution of polyuria, nocturia, and polydipsia, maintaining healthy body weight, correcting dyslipidemia, and improving the child’s adaptation to the chronicity of the condition. Improving adaptation is better achieved when the whole family participates in the management plan. 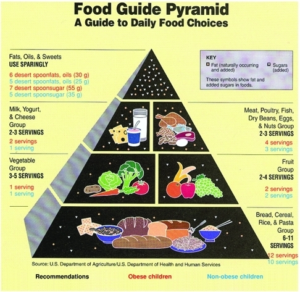 Image: “The pyramid for the five major food groups. The recommended amounts for school-age children are listed in black letters, while our findings for the obese group are written in red and those for the non-obese group in blue characters.” by Garipağaoğlu M, Sahip Y, Budak N, Akdikmen O, Altan T, Baban M – J Clin Res Pediatr Endocrinol (2008). License: CC BY 2.5

The three main aspects of the treatment of type 2 diabetes mellitus are diet, lifestyle modifications, and pharmacotherapy. A healthier diet that is rich in fiber and protein and the incorporation of daily exercise, if possible, is recommended. Metformin should be started as soon as possible. The aim should be to lower HbA1C to a level below 9%.

Statins and angiotensin-converting enzyme inhibitors are indicated in children who do not achieve normotensive blood pressure and who still have elevated LDL and low HDL cholesterol levels despite lifestyle modifications.

Statins, combined with a low intake of fat, and plant sterols consistently reduce LDL-C levels up to 15% are also effective management practices.

Insulin therapy should be initiated if metformin alone was insufficient to correct hyperglycemia in a child with type 2 diabetes mellitus. To consider metformin monotherapy as inefficient, the treatment course should last for at least three months.

Overall, children who develop type 2 diabetes mellitus are at a much higher risk than adults who develop the disease in the long-term. They have increased risks of developing hypertension, dyslipidemia, and cardiovascular disease, as well as stroke.