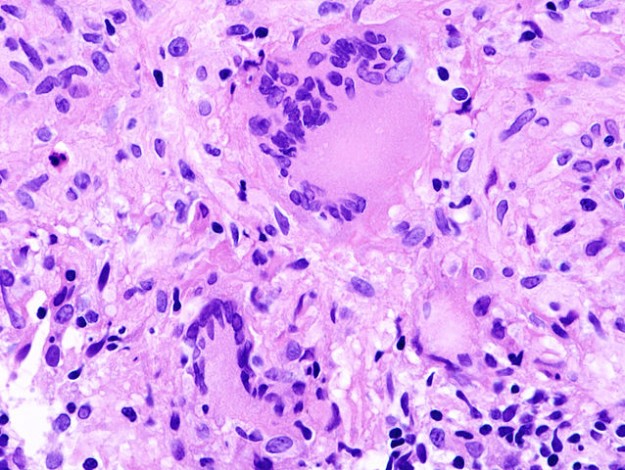 Image: Map of the 22 HBCs (high-burden countries) that account for approximately 80% of all new TB cases arising each year, by WHO Report 2009 – Global Tuberculosis Control. License: CC BY-SA 3.0

Most individuals who are infected with Mycobacterium tuberculosis live in Africa, Southeast Asia, and the Western Pacific region.

Each year, almost 9 million people become sick with tuberculosis, and 1.4 million of these people die from the disease (WHO).

Individuals at greater risk for tuberculosis include residents of countries with high prevalence of the disease, institutionalized patients, individuals who use intravenous drugs, and immunodeficient patients (e.g., those with diabetes mellitus or Hodgkin disease).

Etiology and Pathogenesis of Tuberculosis

Pathogen and reservoir for tuberculosis

Tuberculosis pathogens are acid-fast, aerobic, gram-positive bacteria from the family of Mycobacteriaceae. In the following table, the pathogens of the Mycobacterium tuberculosis complex are listed with their respective reservoirs.

Pathogenically, these bacteria are especially effective at triggering a severe cell-mediated immune response.

Paths of infection for tuberculosis

The mode of transmission for infection with tuberculosis is almost exclusively airborne (droplet infection) via aerosols with droplets < 5 µm in diameter from patients with active/infectious tuberculosis.

Note: Active tuberculosis means that pulmonary involvement is present, and airborne transmission is possible. Extrapulmonary tuberculosis normally does not pose a risk of infection for social contacts. Tuberculosis is not necessarily as contagious as other easily transmitted infectious diseases, such as measles or chicken pox. Whether a person is infected when exposed to someone with active tuberculosis depends on many factors.

Signs and Symptoms of Tuberculosis

Typically, 6–8 weeks pass between exposure to the tuberculosis pathogen and measurable immune response. The risk of tuberculosis disease is greatest in the first 2 years following infection. Infants and immunosuppressed individuals have the greatest risk of developing the disease. 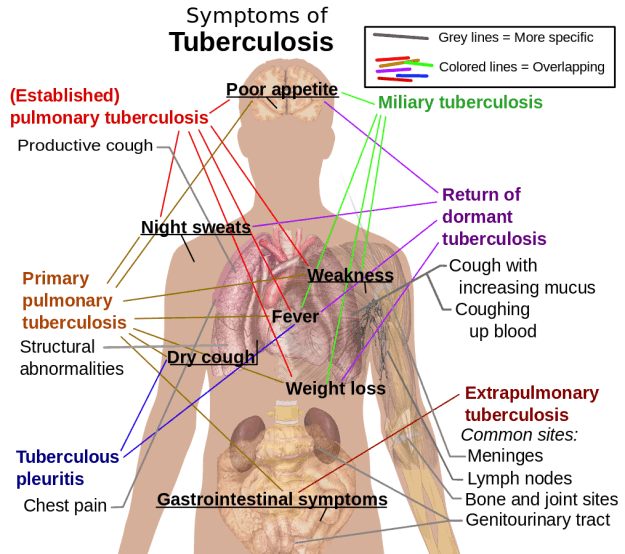 Tuberculosis is not characterized by specific clinical manifestations. Primary tuberculosis, which is usually asymptomatic or presents as a flu, is often not recognized. In the event of the onset of the disease, most infected individuals later become ill from post-primary tuberculosis.

Primary tuberculosis is a latent infection that at first may be detected with a positive result from an indirect test for the pathogen (i.e. Mendel-Mantoux test). At this stage, there is no pathological radiological finding. The infected individual has mostly nonspecific symptoms, such as fatigue, or is asymptomatic. Pulmonary symptoms, such as a productive cough with hemoptysis, may develop.

If no radiological or other pathological changes are detectable, this stage of the disease is known as a latent tubercular infection (LTBI) based on a positive tuberculin reaction.

For all patients with pulmonary symptoms, one must consider tuberculosis in the differential diagnosis.

Weeks or even months can pass until this primary complex (up to 90% of which is located in the lungs) heals completely. Often, scarred and calcified tissue remains, which can be detected in X-rays. Symptoms rarely occur at this point.

Post-primary tuberculosis (chronic tuberculosis) refers to all forms of tuberculosis that follow primary infection. In most cases, the onset of disease is based on re-infection, not a new infection.

Features and symptoms of post-primary tuberculosis

Tuberculosis can affect every organ system and trigger an unlimited variety of symptoms and complications. The following table gives an overview of the most important extrapulmonary manifestations of tuberculosis.

It is important to ask questions about previous infections, trips, and factors that increase risk of tuberculosis (e.g., HIV infection, alcohol abuse). 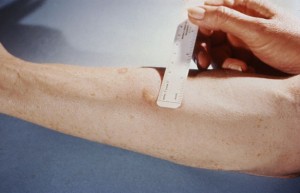 Note: The results of screening tests for tuberculosis are often positive. Positive test results indicate exposure of the immune system to the mycobacteria, but they do not distinguish between active and inactive (latent) tuberculosis.

Chest X-ray can help guide the diagnosis of tuberculosis, but findings may not be specific. The following might be visible on chest X-ray:

Diagnostic tests for tuberculosis include the threefold culture of morning sputum samples, one-time stomach fasting secretion, or invasive procedures, such as bronchoscopy, pleural puncture, or thoracoscopy with biopsy.

In patients with HIV infection, blood cultures are also performed because the hematogenous spread of tuberculosis (bacillemia) often occurs.

Acid-fast bacilli may be detected by using Ziehl-Neelsen stain or immunofluorescence stain with auramine. However, a negative finding does not exclude active pulmonary tuberculosis.

With polymerase chain reaction (PCR) analysis, mycobacteria can be detected within 48 hours. Additionally, this measure is characterized by very high sensitivity and specificity. However, PCR testing cannot distinguish between previous inflammation and active infection.

The most important differential diagnoses for pulmonary tuberculosis are:

In 97% of cases, tuberculosis is curable. Every case of active tuberculosis requires treatment. The patient must be isolated until there is no more risk for infection. Normally, this state is reached at 4–6 weeks after initiation of therapy.

Note: Almost every board examination asks questions about treatments for tuberculosis and their side effects.

Administration of medications for tuberculosis

M. tuberculosis is exclusively transmitted among humans. Screening programs in areas with high risk for infection include tuberculin tests and X-ray images of the lungs.

In areas with low risk for infection, administration of the BCG (Bacille Calmette-Guérin) vaccination is not generally recommended. This vaccination is indicated for individuals at high risk of exposure (e.g., employees in shelters for homeless people).

Note: Administration of the BCG vaccine is contraindicated in individuals with positive tuberculin reactions, immunosuppression, or AIDS.

Chemoprophylaxis should be considered if…

1. A medical student working in the emergency department of a large city hospital sees a patient from Eastern Europe. During the physical examination, the patient coughs several times. On the following day, the medical student learns that this patient is suspected to have tuberculosis. Which of the following statements is most likely true?

2. Anti-tuberculosis drugs are administered in combination. Which is the most likely regimen to be used during the stabilization phase?

3. Which is the most typical X-ray finding for post-primary tuberculosis?