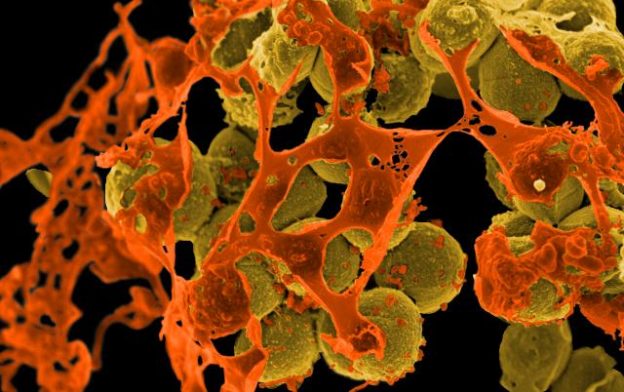 Toxic shock syndrome is a life-threatening infectious condition that is mediated by toxins produced by staphylococcus aureus or group A streptococcus bacteria. These toxins are responsible for the shutting down of multiple organ systems in addition to skin desquamation.

Patients with recent history of varicella infection are at an increased risk of developing a group A streptococcus infection, and toxic shock syndrome or necrotizing fasciitis has been reported in up to 50% of such cases.

Mortality rate is very high in toxic shock syndrome and is estimated to be as high as 70% especially, in cases due to Group A Streptocoocci. Additionally, patients usually suffer significant morbidity if they survive because they might need amputation, hysterectomy and surgical debridement of the infected sites.

Necrotizing fasciitis is a much rarer condition with only 500 cases reported in the literature since 1883. Patients are usually middle aged and more likely to be men. The condition is more common in countries with limited resources and limited access to antibiotics.

Once systemic absorption has happened, the inflammatory response is activated and interleukin-1, tumor necrosis factor and interleukin-6 seem to play an important role in the mechanism of shock and fever in these patients.

Pyrogenic exotoxin bypasses the normal process of MHC-restricted antigen processing causing a cycle of cytokine release and cell stimulation from T cells.  Pyrogenic exotoxin thus acting as a superantigen, triggers the release of huge amounts of inflammatory cytokines from T lymphocytes. These inflammatory cytokines are responsible for fever, shock, and organ dysfunction.

The different toxins produced by staphylococcus or streptococci bacteria are thought to be responsible for the activation of T-cell proliferation, another hallmark of the toxic shock syndrome. The activation of a systemic immune response and the inflammatory system results in multiorgan failure.

On the other hand, necrotizing fasciitis as the name implies means widespread necrosis of the subcutaneous tissue and fascia. The name “flesh-eating bacteria” should be abandoned because it has become clear that necrotizing fasciitis is caused by a polymicrobial infection and the synergetic activity between different multi-bacterial pathogens. In most cases, anaerobic and aerobic bacteria act together and are found in the same patient. Patients usually have recent history of trauma, recent surgery or they are immunosuppressed.

The growth of these organisms is then followed by the growth of anaerobic bacteria and polymicrobial infection of the wound. The most commonly identified bacteria are again streptococci and staphylococcus aureus. Other less common organisms include bacteroides, clostridium peptostreptococcus and klebseilla.

Patients with toxic shock syndrome may present with fever, rash and multiorgan failure. They are usually hemodynamically unstable with hypotension, have renal or respiratory failure and can be confused.

Patients might have recent history of surgical procedures, recent delivery of an infant, deep skin abscesses that were not properly treated or recent menstrual bleeding with the use of tampons. 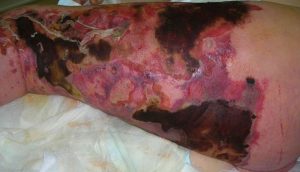 Image: “43-year-old Caucasian male with necrotizing fasciitis. Preoperative photograph on the day of admission. Extensive erythema and necrosis of the left leg.” by Piotr Smuszkiewicz, Iwona Trojanowska and Hanna Tomczak – Late diagnosed necrotizing fasciitis as a cause of multiorgan dysfunction syndrome: A case report. Cases Journal 2008, 1:125. doi:10.1186/1757-1626-1-125. License: CC BY 2.0

Chills, myalgia and influenza-like symptoms are also common. As this is a systemic disease, patients can also develop diarrhea, nausea, vomiting and headaches. History of diabetes, malignant disease, HIV infection or alcoholism should be elicited as these are risk factor for an increased risk of toxic shock syndrome.

Physical examination in toxic shock syndrome reveals fever and hypotensive shock that is not responsive to fluid replacement therapy. Patients might have anuria due to renal dysfunction. Clinical signs of soft tissue infection such as localized swelling, redness and warmness are common.

Patients usually have intense pain and tenderness over the affected area. The muscles are also tender to palpation. The pain is so severe that doctors can suspect a muscular injury rather than fasciitis. Edema and swelling of the skin usually goes beyond the area of erythema. The skin can have vesicles and crepitus on palpation is common which is a sign of air forming inside the fascia.

Expression of the necrotic fascia can be performed by using your fingers to press the skin. Yellow-green necrotic tissue is usually seen oozing out of the skin wound. The necrotic fascia margins are usually beyond the erythema that can be seen in the skin.

A complete blood count with differential is very important in the evaluation of patients with toxic shock syndrome and necrotizing fasciitis. Leukocytosis can be identified in both cases.

Patients with toxic shock syndrome might have renal failure, therefore a urine analysis is indicated. Urine analysis might reveal myoglobinuria, sterile pyuria, and other abnormalities.

Bleeding time due to disseminated intravascular coagulation can complicate the picture, therefore, prothrombin and activated partial thromboplastin times should be checked. Serum creatinine is usually elevated in patients with toxic shock syndrome. Patients might also have impaired liver function in addition to elevated creatinine kinase concentration due to myositis.

Blood cultures are positive in up to 60% of the cases of toxic shock syndrome caused by group A streptococci. Chest radiography can show bilateral lung infiltrates which is indicative of acute adult respiratory distress syndrome.

Patients with suspected necrotizing fasciitis can be offered an early diagnosis by the utilization of advanced imaging techniques such as contrast-enhanced computed tomography or magnetic resonance imaging. These methods allow the assessment of the deep fascia. Treatment in severely ill patients should not be delayed until the confirmation of the diagnosis, however, and surgical debridement is very important to increase the rate of survival.

The confirmation of the polymicrobial nature of necrotizing fasciitis can be tricky because cultures from the superficial layers might be negative. Therefore, samples from deeper layers are indicated. In most cases, waiting for the culture result is not feasible. In that case, polymerase chain reaction testing for the DNA of streptococcal pyrogenic exotoxins SPE-B can be helpful.

Ultrasonography is also helpful in the assessment of the patient with necrotizing fasciitis. Fluid accumulation under in the subcutaneous layers is common and ultrasonography-guided aspiration can be helpful. 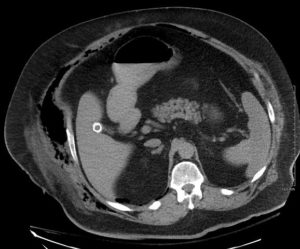 Laboratory investigations in patients with necrotizing fasciitis reveal leukocytosis, elevated blood urea nitrogen and reduced serum sodium level. The serum sodium levels can be lower than 135 mmol/L. X-rays studies are helpful in showing the accumulating gas in the infected sites which might be a sign of a possible clostridia-related disease.

Creating a small incision in the skin under anesthesia should show bleeding in normal healthy tissue. In patients with necrotizing fasciitis, this normal bleeding is absent. Instead, a yellowish-green fluid might come out.

Treatment of toxic shock syndrome is highly dependent on the adequate and early recognition of the condition followed by the prompt use of appropriate antibiotic therapy.

In addition to antibiotic therapy, patients with toxic shock syndrome are also known to be in shock and to have multiorgan failure. It was shown that corticosteroids might be helpful in sustaining a response to fluid replacement therapy. The administration of drotrecogin at the first sign of the first organ failure is thought to alter the prognosis. Fluid replacement therapy is indicated even if the patient’s response at first is not optimum.

Patients with group A streptococcus toxic shock syndrome should receive clindamycin intravenously. Clindamycin is recommended because it is a protein synthesis inhibitor and reduces the production of pyrogenic exotoxin. The differentiation between group A streptococci and staphylococcus infection takes time, therefore, the co-administration of a penicillin with a beta-lactamase resistant antimicrobial. Nafcillin, oxacillin and first generation cephalosporins are good options here.

In addition to the adequate antibiotic therapy for toxic shock syndrome, the original focus of the infection should be examined and treated. For instance, surgical wounds should be cleaned, tampons should be removed and patients with severe skin infections should undergo surgical debridement.

The first step in the management of the necrotizing fasciitis patient is to understand that this condition is a life-threatening emergency and that team work is needed. The patient should be admitted to the surgical department and extensive surgical debridement procedures should be started. Tissue debridement should be started and not stopped until tissue necrosis stops. Amputation of a limb or removal of a single organ might be needed in some cases to control the spread of the disease.

Antibiotic therapy is also important in the management of these patients. Penicillin G combined with an aminoglycoside seems like a good option. Unfortunately, most patients have renal failure, hence the use of aminoglycosides is usually not recommended. In that case, clindamycin should be used.

The use of hyperbaric oxygen therapy should be encouraged only if it is available in the treating hospital because treatment delay and patient’s transfer increase mortality. Some scholars suggest the use of clindamycin as first line therapy in the management of necrotizing fasciitis.

Once the procedure of surgical debridement is finished, the decision to plan surgical reconstruction should be started.