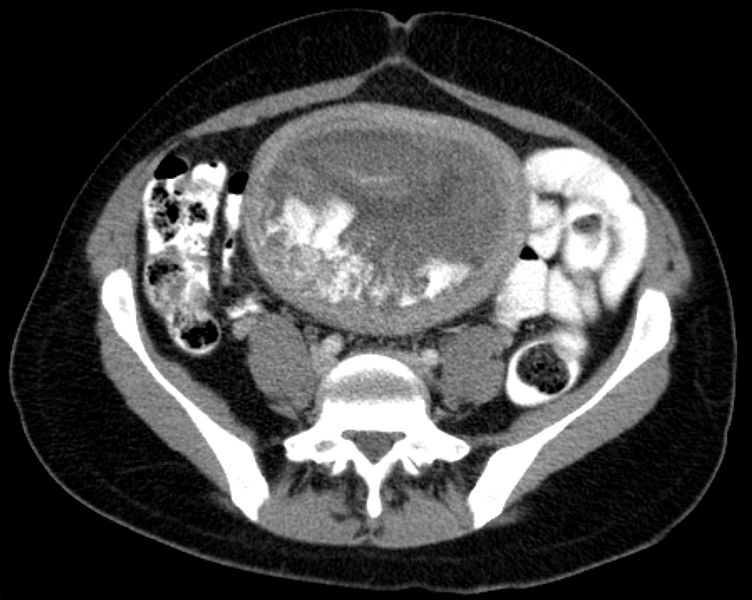 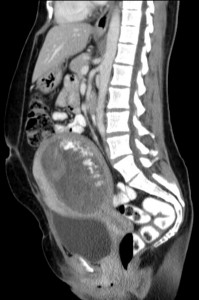 In complete hydatidiform moles, no signs of fetal development are present. In partial moles, some hydropic trophoblastic tissue and fetal tissue may be evident.

The incidence of hydatidiform moles is 20 times higher in Southeast Asian countries, including China than in the USA or Europe. Women under 20 or over 40 years of age are also at a higher risk. 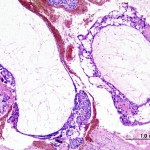 In a hydatidiform mole, hydropic or fluid-filled cysts appear. These are typically the size of a hazelnut and are connected to each other via small peduncles. Because the cysts are not vascularized during the course of proliferation, the supply of blood and oxygen is deficient. As such, the fetus is no longer viable.

The proliferation of trophoblasts leads to the release of increased amounts of beta hCG. This means that a higher-than-usual concentration of the hormone can be measured in the serum.

Lutein cysts form on the ovaries due to the excessive production of beta hCG. Non-specific symptoms such as hyperemesis gravidarum and nausea may also occur.

Generally, there is a discrepancy between the size of the uterus and the gestational age (the uterus is significantly bigger than expected). A sonographic examination usually reveals an irregular distribution of hypoechoic (cystic) and hyperechoic (solid) areas.

In complete hydatidiform moles, no fetal tissue is present; in partial moles, fetal development with abnormalities may be detected. Abnormalities might include growth retardation or other deformities. A significantly increased level of beta hCG in the serum is also an important indication, with the concentration expected to be around twice as high as in a normal pregnancy. Beta hCG is the tumor marker for a hydatidiform mole.

From a diagnostic point of view, a workup for spontaneous abortion should also be carried out, since this can also cause bleeding in early pregnancy.

Initially, light bleeding is treated conservatively, with prostaglandins or oxytocin administrated to stimulate spontaneous expulsion of the mole. Thereafter, the curettage of the uterine wall should be carried out as carefully as possible to avoid perforations. In cases of more severe bleeding, the preceding step should be skipped, and curettage should be performed immediately. A hysterectomy may be performed as a last resort.

Since choriocarcinoma can develop from a hydatidiform mole, regular monitoring of beta hCG levels is essential. 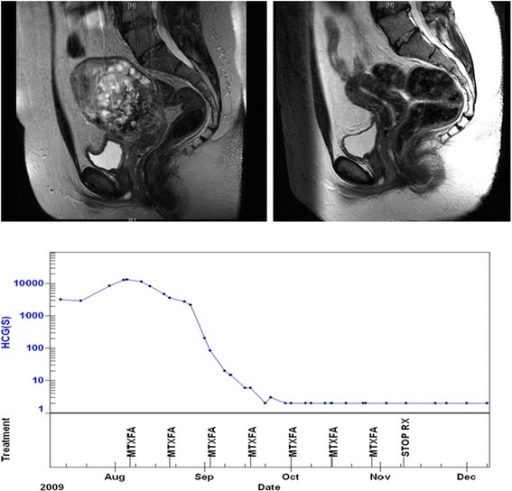 Image: Post-molar pregnancy gestational trophoblast tumor. Pre- and post-treatment MRI scans of the pelvis showing a large uterine mass prior to treatment and a normal scan at completion. The treatment graph shows the fall and normalization of the hCG level with low-dose methotrexate chemotherapy treatment. The patient completed treatment, subsequently had a healthy baby, and was cured of this malignancy. By openi, License: CC BY 4.0

An invasive hydatidiform mole is a benign tumor. Due to its invasive growth, it frequently creates a malignant perforation. It is also commonly referred to as a chorionepithelioma.

An invasive hydatidiform mole is significantly more common in Asia than in the Western world. In Asian countries, chorionepithelioma occurs in about 1 in 20,000 births. Older pregnant women and first-time mothers are at the highest risk.

The development of an invasive hydatidiform mole occurs due to a movement of trophoblast cells into the endometrium. Metastasis occurs as soon as the trophoblast cells reach the bloodstream. Typical sites of metastasis include the lungs, bones, liver, brain, and vagina. However, these generally respond well to treatment.

Typically, the patient will have an enlarged, soft uterus that does not shrink independently. This may be accompanied by recurrent vaginal bleeding that continues despite the evacuation of a hydatidiform mole or termination of pregnancy. Significantly increased beta hCG levels continue to be present in the blood. Organ-specific symptoms typically occur once metastasis has taken place.

As a first step, the beta hCG value should be determined. The results of a sonographic examination will be similar to those obtained in the case of a non-invasive hydatidiform mole. In addition, irregular tumorous regions will be visible in the myometrium.

From a histological perspective, invasive hydatidiform moles are distinguished from complete hydatidiform moles by the increased trophoblast proliferation and invasion of the myometrium. The diagnosis can be confirmed using curettage; however, this is not always possible. Depending on the site of metastasis, a further diagnostic aid, such as a chest X-ray, may be needed.

Chemotherapy is the method of choice. Despite the occurrence of metastasis, this type of tumor has a good prognosis. Once a year of follow-up care has passed, it no longer represents a contraindication for pregnancy. 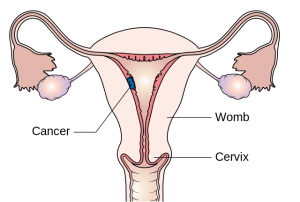 Choriocarcinoma is a malignant trophoblast tumor that consists of degenerated chorionic villi. At a histological level, the villi can no longer be detected; only anaplastic cells are present.

Choriocarcinoma is one of the rarest carcinomas occurring in the female genital tract. It accounts for about 1% of all female tumors.

Risk factors include the age of the woman, first pregnancies and previous abortions.

From a clinical perspective, it is not possible to distinguish choriocarcinoma from an invasive hydatidiform mole. As with an invasive hydatidiform mole, the uterus is soft and enlarged and is slow to shrink. Vaginal bleeding is typical. If metastasis has occurred in the vagina, blue or hemorrhagic metastases may be seen during a clinical examination. Systemic symptoms, including fatigue, tiredness, and weight loss, are frequently reported.

Choriocarcinoma should always be suspected when there is a latency period of 4–6 months between the end of the pregnancy and the appearance of the tumor, when a significantly raised concentration of beta hCG is measured in the blood and when hematogenous metastasis is detected in the liver, bones, and CNS.

The diagnostic procedure is similar to that for an invasive hydatidiform mole. It is important that curettage is carried out and that the beta hCG concentration in the blood is determined. Chest X-ray, MRI, and sonography of the abdomen could also form a part of the diagnostic process.

Treatment of choriocarcinoma is chemotherapy-based, often using methotrexate; 5–6 cycles of cytostatic therapy are typically deployed as treatment. This depends on the levels of beta hCG. The concentration of the hormone should be monitored at regular levels since it serves as a tumor marker.

Johnson, T., & Schwartz, M. C. (2007). Gestational trophoblastic neophasia: A guide for women dealing with tumors of the placenta, such as choriocarcinoma, molar pregnancy and other forms of GTN. Victoria: Trafford.