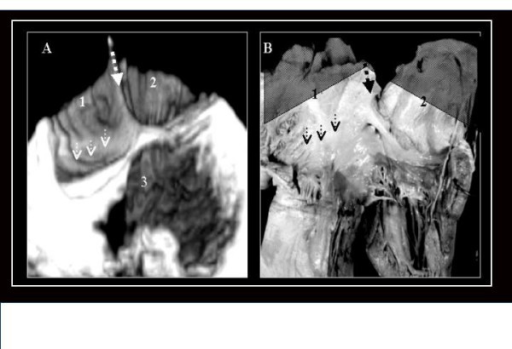 Image: “Four chamber view of a heart with CA and tricuspid atresia as seen in a 3D TEE study (A) and an analogous anatomic specimen (B). 1 and 2 indicate the two portions of the CA separated by a small prominence in its posterior wall (discontinuous arrow). Arrow heads indicate the absence of right AV connection. 3.- A large ventricular septal defect.” By Roldán FJ, Vargas-Barrón J, Vázquez-Antona C, Castellanos LM, Erdmenger-Orellana J, Romero-Cárdenas A, Martínez-Ríos MA – Cardiovasc Ultrasound (2008). License: CC BY 2.0

Patients with tricuspid atresia are usually symptomatic since birth. Both sexes appear to be affected equally without any significant racial differences.

Mortality of tricuspid atresia is largely dependent on the co-presence of other cardiac or systemic congenital abnormalities. The condition is usually fatal if left untreated.

The exact etiology of tricuspid atresia is unknown, but the condition is commonly seen in children with other cardiovascular anomalies. A possible gene that might be indicated with tricuspid atresia is the FOG2 gene. Patients might have ventricular septal defects, pulmonary valvular pathology, or transposition of the great arteries.

Patients with tricuspid atresia do not have any communication between the right atrium and right ventricle. Venous return to the right atrium must escape to the left atrium via an atrial septal defect. Because of the mixing of blood within the left atrium, the oxygen saturation in the systemic circulation is usually diminished.

Affected infants might be cyanotic or appear pale to the parents. Poor feeding habits are also commonly seen. Patients might present with fever, lethargy, neurological deficits or seizures which are suggestive of a brain abscess. Infective endocarditis is also common in patients with tricuspid atresia.

Digital clubbing is commonly seen in cyanotic heart disease, including tricuspid atresia. A left ventricular impulse can be felt on the chest examination. Patients with congestive heart failure might have a pulsatile enlarged liver and a distended jugular vein.

A complete blood count is indicated in patients presenting with cyanosis. Polycythemia is commonly seen. Prothrombin and activated partial thromboplastin time might be abnormal in patients with tricuspid atresia and polycythemia.

The imaging modality of choice for establishing the diagnosis of tricuspid atresia is echocardiography. Echocardiography can help in the assessment of the presence or absence of the tricuspid valve in a cyanotic patient, identify other cardiovascular abnormalities and help with the assessment of the left ventricle systolic function. Other investigations include ECG, pulse oximetry to observe oxygen saturation, radioisotopic scans, and cardiac catheterization.

Patients with severe cyanosis and hypoxemia also have acidosis. Correction of metabolic acidosis might be needed as it has been linked with increased mortality.

The risk of recurrence of cyanosis after these procedures is high. Patients with progressive polycythemia decreased exercise tolerance and recurrent cyanosis are possible candidates for re-operation. A Fontan procedure is recommended at this stage with the aim to connect the right atrium directly to the pulmonary artery while completely passing the right ventricle. Unfortunately, this option is not readily available for all patients with tricuspid atresia.

Unfortunately, most procedures that have been described for tricuspid atresia do not eliminate the risk of progressive polycythemia, brain abscesses, and embolic disease. Fortunately, though, patients nowadays can survive until their early adulthood.

Untreated cases have a poor prognosis. Only 10-20% of cases remain alive until the first year of life.

Surgical palliation increases the chances of survival. The Fontan procedure improves the prognosis. Adults who had undergone this procedure initially show high mortality and morbidity due to re-operation, arrhythmias, and thromboembolic events. Patients with total cavo-pulmonary connection show less morbidity and a good survival rate.