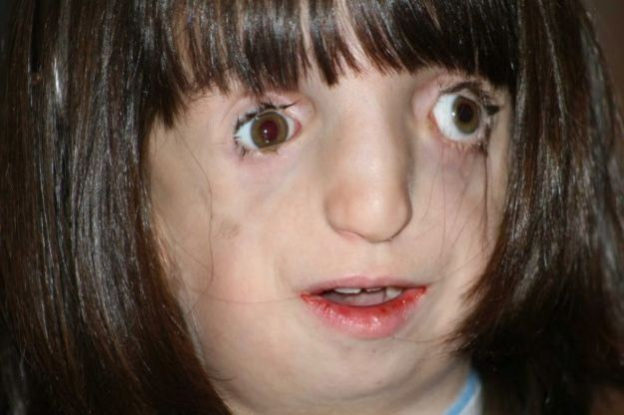 Treacher Collins syndrome is characterized by the congenital hypoplasia of the zygomatic and mandible bones. External ear abnormalities, coloboma, absence of lower eyelashes, and preauricular hair displacement are also common findings in patients with Treacher Collins syndrome. Patients with this syndrome typically have conductive hearing loss due to ankylosis, hypoplasia or absence of the ossicles and middle ear structures. Inner ear abnormalities are typically absent.

Pierre Robin sequence is a triad of congenital micrognathia, glossoptosis, and airway obstruction. Patients with this syndrome also have mandible hypoplasia, but the exact affected bones, size of defects, and severity of the condition are different from Treacher Collins syndrome. 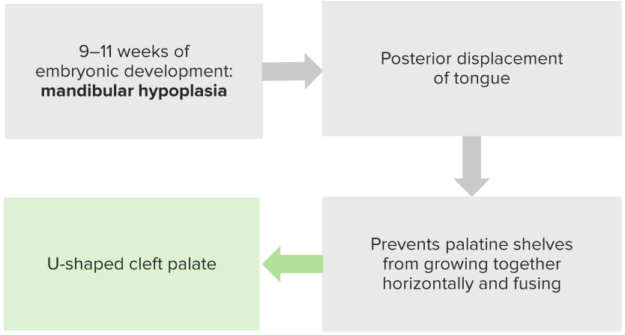 Genetic testing has identified three genes as associated with Treacher Collins syndrome. These genes include:

A few infants with Treacher Collins syndrome do not have a mutation in any of these three genes. Whether an unknown locus is causing the syndrome in those patients is yet to be discovered.

TCOF1 mutations are responsible for up to 71% of the cases of Treacher Collins syndrome. Mutations in this gene can be either sequence variants or deletions; therefore, sequence analysis and deletion/duplication analysis are the two main methods used to look for mutations in this gene in an infant who meets the clinical diagnostic criteria of Treacher Collins Syndrome.

The first clue that genetic predisposition plays a role in Pierre Robin sequence was gained from monozygotic twin studies which showed a high concordance. Deletions in the loci 4p, 4q, 6q, and 11q have been associated with micrognathia which is believed to be the first step in this sequence of malformations. Duplications in loci 10q and 18q have also been linked to micrognathia. Some external factors during intrauterine life, like oligohydramnios, may play a role in micrognathia that, in turn, results in glossoptosis and a sequence that results in Pierre Robin sequence. 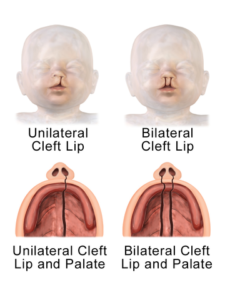 abnormalities rather than the ones mentioned for major features and conductive hearing loss:

are found in approximately one fifth up to one-fourth of the cases.

Pierre Robin sequence consists of a triad of micrognathia, glossoptosis, and airway obstruction.

Glossoptosis is characterized by the abnormal placement of the tongue in the posterior part of the mouth. The main reason behind glossoptosis is micrognathia.

The main diagnostic test to be ordered in an infant born with clinical features suggestive of Treacher Collins syndrome is a radiographic evaluation of the facial bones. The type of abnormalities seen on radiography increases the certainty of the diagnosis.

The main manifestations on conventional radiography employing the occipitomental projection (Waters’ view) are hypoplasia or aplasia of the zygomatic arch. Malar hypoplasia is also seen when computed tomography scanning of the orbital and zygomatic bony structures is performed. Mandibular retrognathia is the main abnormality seen on radiography in infants with Treacher Collins syndrome.

Sequence analysis and deletion duplication analysis of the TCOF1 gene is performed first because it is the most commonly affected gene in this syndrome. Patients with a normal TCOF1 gene should undergo POLR1D sequence analysis. If the previous two genes are normal, or there is a family history of multiple siblings affected with Treacher Collins syndrome, POLR1C should be tested via sequence analysis. Once the mutation is identified, future prenatal diagnosis can be offered and antenatal diagnosis can be offered.

The diagnosis of Pierre Collins sequence is based on the clinical assessment and radiographic findings. Mandibular hypoplasia and/or zygomatic hypoplasia are the main radiologic features seen in this sequence.

The management of the clinical manifestations of Treacher Collins syndrome is dependent on the anomaly being repaired. Patients with airway or feeding difficulties due to cleft palate might get surgical repair any time between birth and two years of age depending on the severity.

Patients with Pierre Robin sequence may be treated non-surgically. The placement of the infant in the prone or lateral position will resolve the airway obstruction in two-thirds of the cases. Sometimes, a nasopharyngeal tube is inserted to avoid frequent oxygen desaturation.

Patients who do not respond to these conservative measures should undergo a surgical procedure for airway obstruction. Tongue-lip adhesion, distraction osteogenesis, and tracheostomy are the main procedures performed in non-syndrome and syndromic Pierre Robin sequence for airway management.

All neonates with significant Pierre Robin sequence are at risk of developing sudden death due to a compromised airway.