The Development of the Tongue | The Lecturio Online Medical Library 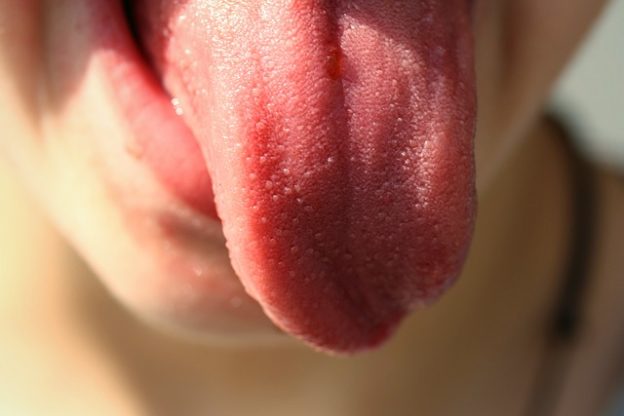 Development of the Tongue

Later, two swellings develop on either side of the tuberculum impar. These swellings are known as the lateral lingual swellings or prominences. The tuberculum impar and the two lateral swellings extend to form the anterior 2/3 of the tongue. A medial lingual sulcus is formed. These fuse in the midline to form the definitive anterior two-thirds of the tongue supplied by V and reinforced by chorda tympani. Posteriorly, this mass meets the copula (or hypobranchial eminence), a central swelling in the pharyngeal floor which represents the 2nd, 3rd and 4th arches and which forms the posterior one-third of the tongue (nerve supply IX and X). 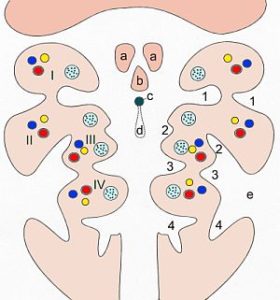 The base of the tongue is formed by the fourth pharyngeal arch and is innervated by a branch of the vagus nerve (CN X) for the touch and taste sensation.

The foramen cecum, labeled as ‘c’ in the diagram, is basically a remnant of the unpaired endodermic bud, which was the primordium of the thyroid gland. The thyroglossal duct regresses and is not present in an adult. In some cases, where it does not regress, a patent tract is present—called the thyroglossal tract—which often leads to the formation of a cyst or a fistula.

Major Developmental Anomalies of the Tongue

Aglossia is the complete absence of development of the tongue.

Microglossia is a small or rudimentary tongue. It is a rare congenital condition, in which the sufferers have difficulty in eating and swallowing. Relative microglossia is when the tongue is smaller in structure compared to the jaw bones.

Macroglossia is an enlarged tongue, which can be either congenital or acquired. It is often associated with Down’s syndrome and Hunter’s syndrome. Acquired macroglossia may be seen in lingual tumors, myxedema, amyloidosis, and angioedema.

Ankyloglossia is a condition characterized by fixation of the tongue to the floor of the mouth. Partial ankyloglossia is also known as tongue tie. Patients have difficulty in speech and swallowing. It may be resolved by surgical intervention.

Cleft tongue results due to lack of fusion of the lateral lingual swellings.

Lingual thyroid nodule occurs when the remnants of the thyroid primordium fail to migrate to its normal position. This results in the formation of a thyroid nodule in the substance of the tongue. It leads to dysphagia, dysphonia and breathing difficulties.