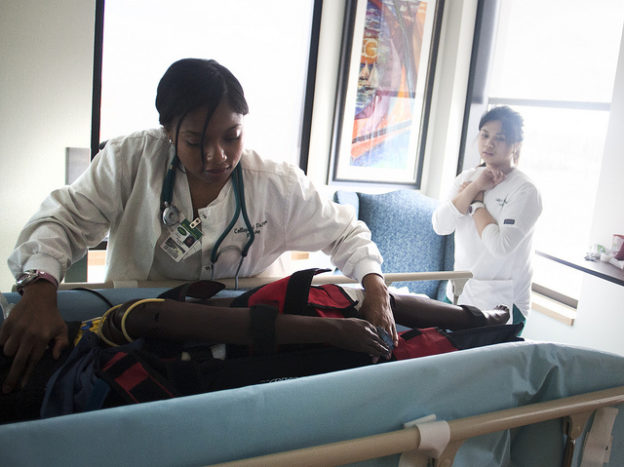 There are many tick species, and relatively few will bite humans. However, those that do carry disease-causing microorganisms, such as parasites, viruses, or bacteria, usually acquired from other animals on which the tick has fed before latching on to a human host.

Lyme disease is the most common tick-borne disease in the US, especially in the northeast and north-central regions. It is caused by the transmission of Borrelia burgdorferi through the bite of infected ticks. Early signs and symptoms appear 3 to 30 days after a tick bite. Late symptoms present after weeks to months. Black-legged ticks and deer ticks spread it.

There are three major stages of the disease:

Ceftriaxone is used for Lyme meningitis and other neurological manifestations.

Cefotaxime and cefuroxime axetil may also be administered if there is no contraindication.

Management of the Lyme Disease in children:

It is a disease caused by the bacterium Rickettsia rickettsii, which is transmitted to humans through tick bites. It can be fatal without appropriate management. The disease presents itself as a sudden onset of fever and headache. It easily disguises itself as another disease; thus, sophisticated tests may be necessary for a definitive diagnosis.

Common signs and symptoms are as follows:

Diagnosis is made based on the patient’s clinical presentation and symptoms. It is later confirmed through specialized lab tests.

The first-line treatment for adults and children is doxycycline. It is given until the patient is afebrile for 3 days.

There are at least three different ehrlichial species in the United States that cause human  ehrlichiosis:

Typically, symptoms appear within 1-2 weeks after the tick bite.

Diagnosis is made by clinical presentation and symptoms of the patient. It is later confirmed through lab tests. The gold standard serologic test for ehrlichiosis is an indirect immunofluorescence assay.

The first line of treatment for adults and children of all ages is doxycycline. After treatment, symptoms usually resolve within 24-48 hours. Physicians may prescribe a longer course of doxycycline if the patient lives in an area endemic to Lyme disease since both diseases are transmitted by the same type of tick.

This disease is caused by the Anaplasma phagocytophilum . A tick (usually a black-legged tick) that has bitten an infected rodent or deer will transmit the infection to humans. It is common in mid-Atlantic, north-central states, California, and the northeast. Anaplasmosis may be more severe in individuals who are immunocompromised or elderly.

The standard serologic test for the diagnosis of anaplasmosis is the indirect immunofluorescence antibody (IFA) assay for immunoglobulin G (IgG) using the A. phagocytophilum antigen.

The first line of treatment for adults and children of all ages is doxycycline. When treated early with doxycycline, the symptoms resolve within a few days to a few weeks.

When you spend time outdoors, take the following precautions to reduce the risk of tick bites, especially in endemic areas.

When you return from spending time outdoors, take the following precautions.

If you live in a rural area, keep the area surrounding the home clear of weeds and brushy areas to deter wild animals.

If you have pets, examine them carefully for ticks. Fit dogs with anti-tick collars. All dogs are susceptible to Lyme disease as well as babesiosis, a malaria-like infection that usually affects dogs by attacking their red blood cells. Cats tend to be more resistant to tick-borne diseases and are hypersensitive to the chemicals in anti-tick collars; consult a veterinarian before using anti-tick collars with cats.

The National Institute for Occupational Safety and Health (NIOSH) 2017. Retrieved from https://www.cdc.gov/niosh/topics/tick-borne/default.html