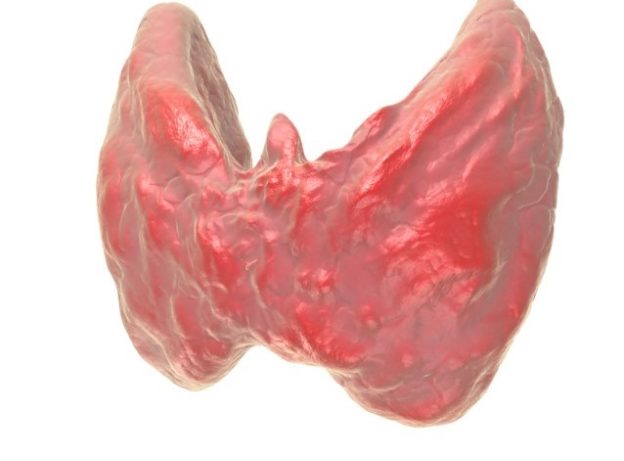 Lobes of the Thyroid Gland

The thyroid gland is divided into two lobes, the left lobe and the right lobe connected by the isthmus. The combination of the two conical or pyramidal shaped lobes and the isthmus forms an H or butterfly-shaped structure. Each lobe is roughly 50—60 mm long, weighing around 25-30 g (this varies from person to person and male to female). 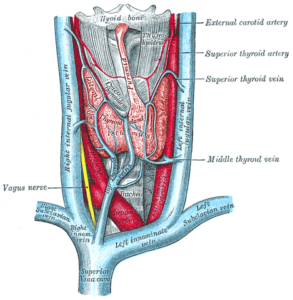 The gland may enlarge in some normal conditions like menstruation and pregnancy. Of the neck muscles, the thyroid is covered anteriorly by the strap (or infrahyoid) muscles and by the sternocleidomastoid muscles. The infrahyoid muscles (strap muscles) are the sternohyoid, sternothyroid, thyrohyoid and omohyoid.

The gland is located within the visceral compartment of the neck, along with the trachea, esophagus, and pharynx. The compartment is bound by the pretracheal fascia.

In some people, the remnants of the thyroglossal duct persist and form an accessory thyroid nodule or cyst of thyroid tissue. These remnants are usually found in between the isthmus and the foramen caecum at the base of the tongue, where the thyroid originated in the embryo. Occasionally, it becomes enlarged and is visible as a swelling in the anterior part of the neck. A lingual thyroid located at the base of the tongue may be the only thyroid tissue present in the body. An ultrasound of the neck should be done in every case prior to removal of the lingual thyroid.

Histology of the Thyroid Gland

There are two types of epithelial cells:

The function of the follicular or principal cells is to secrete the colloid containing iodo-thyroglobulin, whereas the parafollicular cells produce the hormone calcitonin. This hormone, in conjunction with the parathyroid hormone produced by the chief cells of the parathyroid glands, regulates calcium levels in the blood.

The thyroid gland is covered by the “strap muscles” of the neck. The lateral surface of the gland is covered by the sternothyroid muscle. Anterior to this muscle is the sternohyoid muscle and the superior belly of the omohyoid muscle. The nerve supply of the muscles enters the muscles inferiorly coming from the ansa cervicalis. During thyroid surgery, if the strap muscles are to be transected to expose the gland, it should be done superiorly.

The pretracheal fascia, which covers the trachea and few other structures in the neck, also encapsulates the thyroid gland. It is labeled as the false capsule or the visceral layer of the pretracheal fascia. The posteromedial aspect of the gland is attached to the side of the cricoid cartilage, first and second tracheal ring, by the posterior suspensory ligament (i.e., Berry ligament). This firm attachment of the gland to the laryngeal skeleton is responsible for the movement of the thyroid gland and related structures during swallowing.

Beneath this false capsule, the thyroid gland is covered by a thin layer of true capsule, which divides the gland into lobes and lobules through septae formation. Lobules are further divided into follicles, which are the main structural unit of the gland. The inner capsule is thin and sticks to the gland closely.

Blood vessels, i.e. arteries and veins along with lymphatics, also move along these septae and cross the true and false capsule to supply the gland or carry away blood loaded with thyroid hormone secretions toward the heart and the rest of the body.

Relationships of the Thyroid Gland

Relationships of the right lobe of the thyroid gland

Relationships of the left lobe of the thyroid gland

Relationships of the isthmus of the thyroid gland

The isthmus is related posteriorly to the cricoid cartilage, and the first and second tracheal rings, the cricothyroid membrane superiorly and to the strap muscles and the deep cervical fascia anteriorly and inferiorly.

Supply and Drainage System of the Thyroid Gland

Blood supply of the thyroid gland 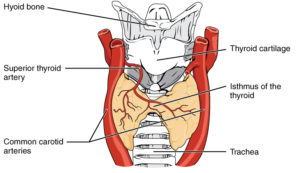 The superior thyroid artery is the first branch of the external carotid artery, which supplies the upper part of the thyroid gland. It divides into anterior and posterior branches.

An additional artery present in a small number of people is known as the thyroid ima artery. It emerges from the arch of the aorta or the brachiocephalic trunk and supplies the isthmus and the lower part the gland.

Venous drainage of the thyroid gland

The venous drainage of the gland occurs through three major veins:

These veins form a venous plexus on the anterior surface of the thyroid gland. The superior thyroid veins accompany the superior thyroid artery and empty in the internal jugular vein or the facial vein. They collect deoxygenated blood from the upper part of the gland.

The middle thyroid vein is relatively short. It collects deoxygenated blood from the middle part of the thyroid lobes and empties into the internal jugular vein.

Inferior thyroid veins drain into the brachiocephalic veins. They collect deoxygenated blood from the lower part of the gland through the venous plexus.

Nerve supply of the thyroid gland

The autonomic nervous system supplies the thyroid gland via the Vagus and superior, middle and inferior cervical sympathetic ganglia. Autonomic regulation of thyroid hormone secretion is not clearly understood.

The vagal and sympathetic fibers to the gland follow the course of blood vessels. A peri-arterial plexus is formed around the gland, which supplies the gland and penetrates the gland through the septae. Nerves also enter the gland along with these blood vessels. These nerve fibers produce vasoconstriction which decreases blood perfusion to the gland, affecting gland secretion. Hormonal secretion is controlled by the thyroid secreting hormone, produced in the pituitary gland.

Lymphatic drainage of the thyroid gland

Relations of the Recurrent Laryngeal Nerve

Consideration of the anatomy of this nerve and its branches must be made during thyroidectomy. Preservation of all the branches of the recurrent laryngeal nerve should be ensured during thyroid surgery, as the laryngeal nerve controls the movement of the vocal cords and carry sensory information from the mucous membranes of the larynx below the lower surface of the vocal fold.

Clinical Anatomy of the Thyroid Gland 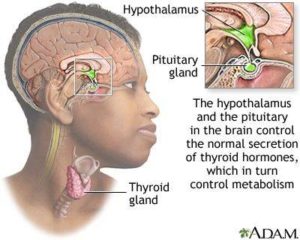 The thyroid hormone is produced in response to the thyroid-stimulating hormone from the pituitary gland.

T3 (tri-iodothyronine) and T4 (tetraiodothyronine) are the two thyroid hormones released into the blood circulation. Initially, T4 is produced in the gland and stored. On stimulation from the pituitary gland, T4 is released into the blood by the gland which is converted into T3 in the liver and other tissues. T4 is the inactive form of thyroid hormone while T3 is the active form.

Thyroid hormone increases cell metabolism and promotes growth and development. The following are the major functions of the thyroid hormone:

Thyroid hormone has the following effects on the body:

Feedback system for the regulation of thyroid hormone 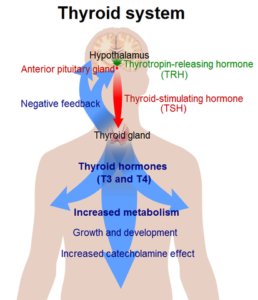 Calcitonin inhibits the activity of the osteoclasts leading to inhibition of the bone resorption. Its action is on the bone, kidneys, and GI tract. It also inhibits parathyroid hormone and vitamin D.

Hyperactivity of the thyroid gland

Diseases or any other cause can lead the thyroid gland to swell.

Thyroid swelling can be due to a solitary nodule or multiple nodules. The nodule can be cold or hot, benign or malignant. Thyroid cancer is also a common occurrence.

Thyroid follicles are in a hyperactive state and are filled with colloid material surrounded by simple epithelium. 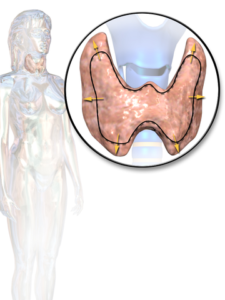 A swollen thyroid gland due to hypo- or hypersecretion of the thyroid hormone or due to inflammation is called goiter. A goiter can be of a single nodule called the solitary nodular goiter or more than one nodule/swellings/lumps in different parts of the gland called multi-nodular goiter.

Surgical removal of the thyroid gland is called thyroidectomy.

After exposing the gland through neck surgery with skin incision, the straps muscles are retracted. Blood vessels are ligated close to the gland after visualization of the laryngeal nerves.

M. Witmer, Lawrence. (2003). Clinical Anatomy of the Clinical Anatomy of the Thyroid and Adrenal Glands Thyroid and Adrenal Glands. Retrieved March 14, 2018, from https://www.researchgate.net/publication/238732388_Clinical_Anatomy_of_the_Clinical_Anatomy_of_the_Thyroid_and_Adrenal_Glands_Thyroid_and_Adrenal_Glands