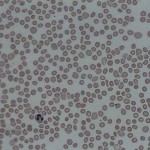 Image: A film from a thrombocytopenic patient that is almost devoid of platelets. By: Prof. Erhabor Osaro. License: CC BY-SA 4.0

Like almost all bleeding disorders, the causes of thrombocytopenia can be divided into disturbed synthesis or increased peripheral turnover.

Thrombocytopenia due to synthesis disorders

Decreased thrombocytopoiesis can occur in the context of an aplastic disorder. For example, Fanconi anemia is a congenital variation. Acquired blood cell (and thus, thrombocyte) synthesis disorders include bone marrow lesions due to radiation, chemicals, medications, infections (e.g., HIV), or antibodies. In addition, bone marrow lesions are possible in the context of malignant infiltration in leukemia, carcinomas, or lymphomas. Similarly, myeloproliferative disease can lead to the production of abnormal blood cells in the bone marrow.

Synthesis disorders can also develop even if the bone marrow is functioning properly. For example, cell maturation can be impaired, which occurs in cases of vitamin deficiency. In this context, vitamin B12 or folic acid deficiencies are especially important.

Thrombocytopenia due to increased peripheral turnover

Peripheral consumption can be further divided into:

Many mechanisms lead to the production of autoantibodies against thrombocytes. If thrombocytopenia is observed after a previous infection, an acute post-infectious immune thrombocytopenia is probably present. It often affects children after they experience gastrointestinal or respiratory viral infections. In most cases, the disease is self-limiting. In such cases, aspirin must not be given! If spontaneous healing does not occur, glucocorticoids can be administered. The administration of thrombocyte concentrations only becomes necessary in the event of life-threatening bleeding.

Apart from the acute form, there is also a chronic variation: chronic immune thrombocytopenic purpura (Werlhof’s disease). Here, autoantibodies are produced in the spleen. The disease is often associated with Helicobacter pylori gastritis. Therapeutically, immunosuppressive therapy is initiated (glucocorticoids, immunoglobulins, or rituximab) in addition to the H. pylori eradication and careful observation. The last resort is splenectomy. 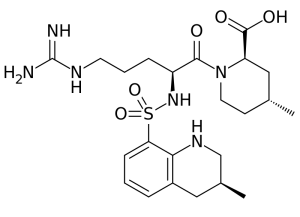 Image: Skeletal formula of argatroban, a direct thrombin inhibitor as an alternative to heparin in HIT. By: Fvasconcellos. License: Public Domain

Further, it should be noted that drugs can provoke antibody production. However, a notable variation is noted with heparin-induced thrombocytopenia (HIT), in which antibodies are produced against the heparin/platelet factor-4-complex due to heparin therapy. This syndrome is life-threatening. Therapy has to be stopped or changed immediately.

Thrombocytopenia due to enhanced thrombin activity

Enhanced thrombin activity can be observed in disseminated intravascular coagulation (DIC) and in malignant and infectious processes.

Thrombocytopenia due to other causes

Thrombocytopenia often occurs in the context of splenomegaly. However, the spleen allows the pooling of thrombocytes and simultaneously causes increased degradation. Compared to synthesis disorders in the bone marrow, all cell lines are mostly affected. Thrombotic microangiopathy or hemolytic-uremic syndrome also leads to thrombocytopenia via the development of thrombi rich in thrombocytes with microangiopathy. 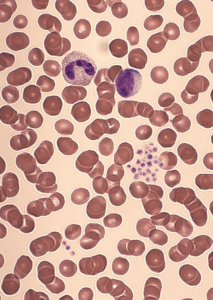 Blood testing techniques can lead to false conclusions and a wrong suspicion of thrombocytopenia. Due to EDTA-agglutinins or cold agglutinins, very low thrombocyte counts can be reported, without the patient showing clinical symptoms. Thus, another blood sample should be taken and sent to the laboratory for testing; this time, preferably in a citrate tube. 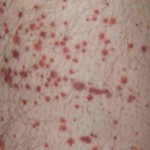 Clinically, thrombocytopenia becomes relevant at values of < 80,000/µL since an increased bleeding tendency has to be assumed at this level, as long as no functional disorder of the thrombocytes (thrombocytopathy) is present. The classic characteristic of thrombocytic bleedings are petechiae, which develop at thrombocyte counts of < 50,000/µL. Depending on the underlying disease, additional symptoms can manifest and are heterogeneous in nature. It is important to identify the exact cause of the clinical manifestation of a suspected underlying disease in the event of detected thrombocytopenia.

A diagnosis of thrombocytopenia is made if < 140,000 thrombocytes per µL of blood are present. Diagnostically, it is important to conduct an extensive and targeted review that narrows down the differential diagnoses. Additionally, the physician should consider the existence of an underlying disease. In the case of blood diseases, all cell lines have to be determined and evaluated. 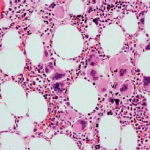 If no significant increase in thrombocyte is noted after the administration of thrombocyte concentrates, the following causes should be considered:

Thrombocytic bleeding can also occur at normal thrombocyte values. In such a case, one should consider thrombocyte function disorders, which can occur in the context of different inherited diseases of metabolism or antiplatelet drug therapy.