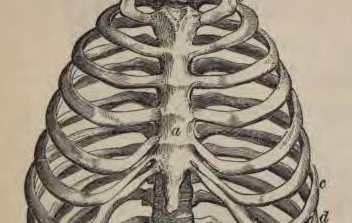 The thorax is the region of the body that is located between the neck and abdomen. Traumatic injury to the chest, also known as thoracic traumatic injury, is any form of injury that happens to the chest because of a blunt or penetrating trauma. The thorax encompasses vital organs such as the heart, major blood vessels, and lungs. Injury to any of these vital organs is associated with significant mortality.

Traumatic pneumothorax is defined as the abnormal collection of air in the pleural space due to a laceration of the lungs.

Rib fracture and flail chest: Rib fractures are commonly seen in patients who have sustained a blunt trauma to the chest. A flail chest is defined as at least two fractures per rib in two adjacent ribs which would produce a free segment.

Pulmonary contusion: Blunt chest trauma might result in a lung contusion. Blood gets accumulated in a small part of a lung lobe, in the whole lobe, or might involve more than one lobe. A patient with rib fractures should be investigated properly to exclude pulmonary contusions. When we say investigated properly, we are referring to ordering a non-contrast chest computed tomography scan.

Approximately, 13.4% of those who sustain poly-trauma injuries are expected to have a thoracic traumatic injury.

The estimated incidence of rib fractures in the United States was reported to be around 346 per 100,000 population in those aged 50 years or older. The incidence in other age groups is largely unknown most likely because of an under-reporting issue.

Rib fractures are more common after blunt trauma to the chest. Falling down might cause a rib fracture, however, this is unlikely to happen in a healthy young individual. Because of osteoporosis, the elderly are at an increased risk of developing rib fractures after falling down.

Based on the mechanism of injury

Based on the nature of the point of contact with the thorax, thoracic injuries can be classified as either blunt or penetrating. Associated injuries, the diagnostic workup, and management are influenced by the mechanism of injury. Therefore, it is important to ask about this while taking the medical history from the patient or those accompanying the patient.

Based on the injured organs

Traumatic cardiac injuries include traumatic cardiac arrest, myocardial contusion, tamponade, and bloody pericardial effusion. The ascending aorta, and thoracic aorta might be injured in patients sustaining a penetrating chest trauma. Blunt trauma of the chest might result in dissection of the aorta. Airway injuries include tracheobronchial injury.

Chest wall injuries include rib fractures, sternum fractures, and fractures of the shoulder girdle. Flail chest is another example of a chest wall traumatic injury. Chest wall contusions and bruises are seen after blunt chest trauma.

Flail chest: The fracture of multiple rib bones is referred to as flail chest. It interferes with breathing and causes ventilatory insufficiency.

Pulmonary contusion: The three theory, which is proposed for explaining the formation of pulmonary contusion, includes the inertial effect (shredded alveolar tissue), the implosion effect (pressure waves cause exploding of the bubble loaded alveoli) and the spalling effect (the alveoli burst as they meet the shock wave).

Pneumothorax: The clinical feature of pneumothorax is chest pain which is rapid in onset. It is one-sided and associated with severe difficulty in breathing.

Pulmonary contusion: This injury presents with chest pain, along with coughing of blood. The patient experiences difficulty in breathing along with reduction in cardiac output. Another symptom includes decreased breath sound during auscultation.

The diagnosis of blunt injury requires the assistance of radiological techniques such as ultrasonography and computed tomography (CT) scans of the chest. In many cases, penetrating injury can be diagnosed simply by clinical examination and medical history.

In most cases of pneumothorax, the diagnosis can be established by simple clinical examination. At that time, the physician might notice a dampening of breathing sounds due to the decrease in transmission of lung sounds through the collection of air. The percussion of the chest wall results in hyper-resonant vibrations.

Additional radiological examinations, such as chest X-Ray and CT scan, can be done to confirm the diagnosis.

When a rib fracture is seen on a chest x-ray, the probability of pulmonary contusion increases. This is especially true if peripheral oxygen saturation is difficult to remain within the normal range despite the administration of high-flow oxygen therapy.

Adequate fluid and supplemental oxygen therapy are usually needed in any patient with a significant thoracic traumatic injury.

Pain management forms an integral part of the therapy. Opioids are avoided to the best possible extent due to the fear of respiratory depression.

Penetrating injury is managed conservatively in most cases using a chest drainage tube.

Penetrating injuries might be associated with vital organ injury. Accordingly, surgical treatment is tailored against the specific type of injury.

Management of the specific forms of thoracic traumatic injuries

The management of pneumothorax depends on the amount of air which is collected in the pleural cavity.

A small pneumothorax is most likely to resolve on its own, whereas, tension pneumothorax should be first treated with an emergency needle thoracotomy followed by a definitive chest tube.

Rib fractures do not require any special form of treatment other than pain control.

Internal fixation of the fractured ribs in a patient with a flail chest provides definitive treatment, however, this is usually not needed.

Adequate supplemental oxygen therapy and fluid therapy are all that is needed. Mechanical ventilation might be needed in more severe cases.

A simple pneumothorax might progress to the more life-threatening condition known as a tension pneumothorax. Rib fractures usually have a good prognosis, however, they might be associated with internal injuries such as pulmonary contusions. A flail chest predisposes the patient to an increased risk of developing pneumonia due to the blocking of the smaller airways because of impaired ventilation.