Temperature is a physical parameter. The following statements are based on the temperature of substances:

The astronomer Anders Celsius defined benchmarks for the Celsius scale. According to Celsius, the boiling point of pure water was 0°C and the melting point was 100°C. The boiling and melting points were only reversed after his death, although he laid the foundation for temperature measurements used currently.

The Zeroth Law: The Concept of Temperature 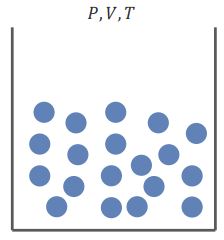 According to its definition, absolute 0 is the lowest temperature that can still be measured. It is at 0 Kelvin (= – 273.15°C). The theory implies that gases get colder with diminishing particle speed. At the absolute 0, the speed of all particles equals 0, suggesting that no negative temperatures can be measured on the absolute temperature scale (Kelvin).

For ideal gases, the pressure is directly proportional to the temperature. The following laws describe the correlation between 2 parameters while other parameters remain constant:

If the pressure of an ideal gas is increased and the temperature and the amount of substance remain constant, the pressure is inversely proportional to the volume:

The volume of an ideal gas is proportional to its temperature as long as the amounts of substance and pressure remain constant.

Different substances expand to different degrees under a constant increase in temperature. The phenomenon is known as thermal expansion, which does not occur steadily, and is classified depending on the extent of expansion:

The linear coefficient of thermal expansion is defined as the change in length of a substance in relation to its total length.

The volume-specific expansion coefficient is defined as the change in volume of a body in relation to its total volume when the temperature is changed by 1 K.

The temperature of a substance can be measured depending on its different characteristics.

A liquid—usually mercury or dyed alcohol—is placed in a thin tube with an attached scale. The temperature is measured by the changes in volume during heating or cooling of the liquid. The liquid in the thermometer must:

Water is not appropriate due to the anomalous expansion of water, i.e., if the water is heated from -15°C, it expands but only until 0°C. At this point, it starts to melt and contract up to 4°C. Upon further heating, the water expands uniformly until its boiling point.

A drop of mercury is placed in a thin tube, similar to the liquid thermometer. The tube encloses a small volume of gas, which expands if warmed up or decreases upon cooling down.

The thermal expansion varies depending on the substance. A coiled bimetallic strip consists of 2 different types of metal and is attached to an indicator. When the bimetallic strip is heated, the 2 metals expand at different intensities, which leads to a deflection of the indicator.

Heat is a special type of energy. According to the principle of conservation of energy, the inner energy can only be generated via conversion of other types of energy such as mechanic, electric, chemical or nuclear energy.

Remember: Energy cannot be destroyed but only converted from one form of energy into another (see also article Mechanics I).

Heat and inner energy are equal to other forms of energy and at least partially interconvertible.

Heat is calculated as:

The heat absorbed or emitted by a body equals the product of specific heat capacity, the mass of the body and the change of temperature. 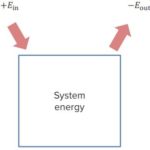 The energy in a closed system is conserved. Energy can be added or subtracted to the system but is not lost or gained within a system. The internal energy of a system is expressed as U.

If a heat source provides a specific amount of heat within a specific interval of time, the thermal output is defined by the quotient of heat and time.

Heat can be transferred in 3 different ways: conduction, convection, and radiation. In this process, heat is transferred from a hotter body to a colder one.

If a body is heated in one place, the density of the liquid is reduced at that location due to the increase in temperature. Buoyancy raises the warm liquid up and the colder liquid sinks to the bottom, which leads to the transport of water mass carrying heat energy.

Humans continuously exchange heat with their surroundings via four mechanisms.

Heat travels from places at a higher temperature to neighboring (bordering) places at a lower temperature via the transfer of kinetic energy between different molecules. The better the conductor, the more rapid is the heat transfer.

The movement of particles in liquids and gases is also defined as convection, which is an important factor controlling the emission of body heat during thermoregulation. Convection facilitates the transport of blood gases throughout the body with the blood flow.

Heat radiation does not require an intermediate medium to transport thermal energy from a warmer body to a colder one. Heat rays are not only emitted by warm bodies that emit light but also by non-light emitting bodies when their temperature is higher than the temperature of their surroundings. Upon the impact of heat rays, a body at a lower temperature is heated up.

Evaporation (loss of heat through vaporization)

Vaporization occurs via skin in the form of sweat.

The Principle of Thermodynamics

The state of a gas is identified depending on the 3 state variables: pressure, volume, and temperature. Change in 2 or all state variables is referred to as a change of state. Each state of a system carries a specific, clearly defined value of inner energy, based on the 1st principle of thermodynamics applies. The input of heat and kinetic energy increases the inner energy of a closed system.

If Q is the amount of heat energy input, W denotes the conducted mechanical work and ΔU represents the change of inner energy, then:

In the case of ideal gases, mechanical work leads to a change in volume. The input of heat energy results in increased inner energy and volume. The inner energy refers to the total energy within a system. It only depends on the states of pressure, volume, and temperature. The change of inner energy is determined only by initial and final states.

Since the conduction of heat is a particularly important topic in medicine, this chapter will address the issue in further detail.

The easiest mode of heat transfer is heat conduction. As mentioned earlier, heat transfer occurs from a warmer substance to the colder one.

Heat conduction only occurs inside matter and across a temperature gradient. Different materials display different heat conductivity, which is expressed as the coefficient of thermal conductivity. The coefficient of thermal conductivity is the amount of heat that is transferred per time unit across 2 opposite sides of a cube with an edge length of 1 m and a temperature difference of 1 K, with the other sides of the cube remaining completely impermeable to heat.

It is also possible to express the thermal conductivity of materials with respect to a specific substance, to obtain the relative conductivity.

Different heat therapies are used in medicine, for example, to improve and preserve the function of the locomotor system, to strengthen and relax musculature, improve the muscle tone, or relieve pain.