Thalassemia is microcytic-hypochromic anemia. It is caused by the decreased synthesis of 1 or several globin chains. Since globin synthesis is flawed, the disease is one of the so-called hemoglobinopathies. Depending on which globin chain is affected by the disorder, one speaks of α- or ß-thalassemia.

Thalassemias are caused by gene mutations leading to the decreased production of globin protein. Deletions of α-globin genes cause α-thalassemia. There are 2 α-globin genes closely linked on chromosome 16 and a total of 4 alleles.

Since thalassemia more frequently occurs in the Mediterranean area, including Turkey, it is also referred to as ‘Mediterranean anemia.’ However, it can be found worldwide. It is estimated that approx. 3% of the global population carries at least 1 ß-thalassemia gene.

Thalassemia is an inherited autosomal-codominant. A milder form of the disease develops with heterozygosity (minor thalassemia) whereas the severe form (major thalassemia) can be observed with homozygosity. There is also an intermediate thalassemia form. The primary causes are genetic defects, which form the pathogenetic basis of the decreased synthesis of 1 of several polypeptide chains of the globin molecule. 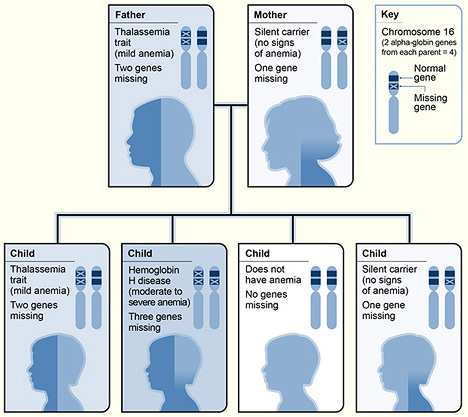 The characteristics and severity of the disease depend on the number of genes deleted: 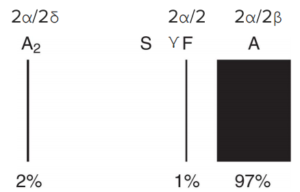 Newborns: Splenic macrophages phagocytose and destroy red blood cells (RBCs) with fetal hemoglobin (HbF) and replace them with hemoglobin A (HbA) and hemoglobin A2 (HbA2), which takes a few months.

Anemia, but no change in % of Hb A, A2 or F (all of them need α-globin chains for their synthesis).

There is only 1 β-globin gene on chromosome 11, a total of 2 alleles. β-thalassemia is primarily caused by splicing mutations in β-globin genes.

There are 2 types of mutations in the β-globin gene:

This results in 3 different clinical syndromes:

Depending on the genetic defect, thalassemia shows a variable clinical picture.

Minor thalassemia usually does not show severe symptoms. Slight hepatosplenomegaly and possibly recurrent jaundice in a mild form can be present. Also, target cells can be observed in the blood count.

In its more distinct form, that is major thalassemia, the disease can lead to bone deformations, and even fractures, due to the reactive expansion of erythropoiesis in the bone marrow. Because of the decreased, and often pathological erythrocytes, hypoxia becomes clinically relevant as growth disturbances and trophic skin changes are observed during childhood.

There are 2 consequences of decreased α-globin production:

It is most common in patients of Southern Asian (–allele) and African (-α allele) descent.

It causes severe transfusion-dependent anemia that develops at a few months of age (as HbF declines). If adequately transfused, children will develop normally but will develop secondary hemochromatosis and die of heart disease in their 20s. If not transfused, there is stunted growth, bony changes, and high-output heart failure with death in infancy.

In major thalassemia and intermediate thalassemia, hypochromasia, and poikilocytosis are more distinct. Reticulocytes, lactate dehydrogenase (LDH), and bilirubin are increased; haptoglobin is decreased.

The ideal therapy is allogeneic stem cell transplantation. Since the minor form does not usually require treatment, this primarily applies to major thalassemia.

Course and Prognosis of Thalassemia

If the anemia is not treated adequately, there is a massive expansion of hemopoiesis within the bone marrow. This can lead to a ‘hair on end’ appearance on skull X-ray. If regular transfusions are given, iron chelation must be started.

While minor and intermediate thalassemia mostly progresses without complications, major thalassemia during infancy can lead to death if not treated. Another life-shortening factor is increased iron accumulation (hemosiderosis), which is why iron supplementation is contraindicated in cases of thalassemia.

Note: Thalassemia is microcytic, hypochromic anemia caused by a genetically-based decreased synthesis of 1 or several globin chains. It is classified into 3 forms: minor thalassemia, major thalassemia, and intermediate thalassemia. In a blood smear, the target cells can be seen. In differential diagnoses, thalassemia must not be confused with iron deficiency anemia since iron substitution in the case of thalassemia falsely diagnosed as iron deficiency anemia leads to increased hemosiderosis.
Learn. Apply. Retain.
Your path to achieve medical excellence.
Study for medical school and boards with Lecturio.
References