Tetralogy of Fallot (TOF) in Children — Pathophysiology and Treatment 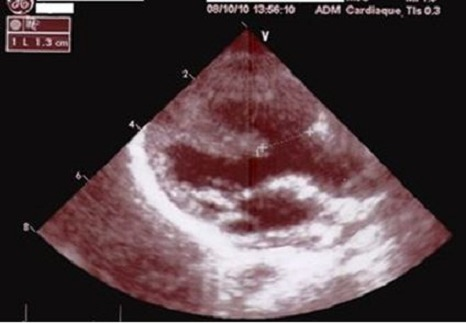 Tetralogy of Fallot (TOF) is a very common congenital heart disease that is characterized by four things as the name suggests: 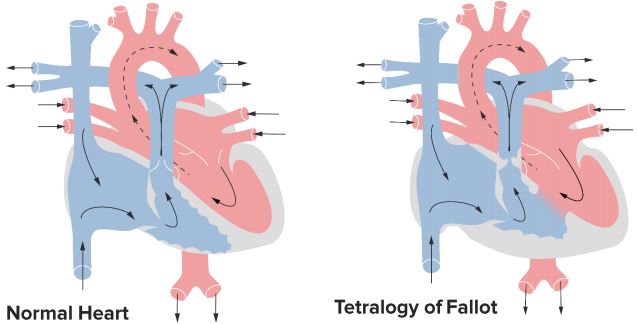 Epidemiology of Tetralogy of Fallot

TOF has been associated with an increased risk of cleft lip and palate, hypospadias and skeletal abnormalities. TOF has been described in familial and sporadic cases. The most likely genetic locus to be associated with TOF is 22q11.2. TOF is more common in boys and is believed to be more common in siblings of affected children. Most patients present to the clinic before 15 years of age.

The prognosis of TOF is dependent on the degree of the right ventricular outflow tract obstruction and on whether the patient is a possible candidate for surgical intervention or not. Ventricular arrhythmias and sudden cardiac death seem to be more common in this group of patients compared to the general population.

Left untreated, 90% of the patients are expected to die within the first twenty years of their life. The risk of stroke, subacute bacterial endocarditis, and pulmonary embolic disease is reported to be higher in untreated TOF. Patients with TOF and pulmonary atresia have the highest mortality rate.

Classification of Tetralogy of Fallot

Cyanotic TOF: The infants with TOF, along with moderate to severe pulmonary obstruction, are cyanotic (bluish) at birth due to the right-to-left shunting of de-oxygenated blood across the ventricular septal defect (VSD) from the right ventricle to the body.

A-cyanotic TOF: The infants with TOF, along with mild pulmonary obstruction, are usually a-cyanotic because there is little or no right-to-left shunting of the blood at the ventricular level; however, these patients still undergo complete intracardiac repair.

Pulmonary atresia/VSD: It is also described as TOF with the pulmonary atresia and is different from other types both anatomically and physiologically. It is often associated with the malformation of the central pulmonary arteries.

Pathophysiology of Tetralogy of Fallot

The exact etiology of TOF is unknown, but genetic predisposition has been described. Polymorphisms in the methylenetetrahydrofolate reductase gene and the VEGF gene have been linked to an increased risk of TOF from two recent studies.

The most commonly identified risk factors for TOF include maternal rubella, alcohol use during pregnancy, maternal history of phenylketonuria and maternal diabetes. Additionally, women who are older than 40 years of age are more likely to give birth to children with TOF than younger women.

Deletions on the chromosome band 22q11 have been linked to an increased risk of TOF, abnormal facies, thymic hypoplasia, cleft palate, and hypocalcemia.

By definition, the tetralogy of Fallot (TOF) involves four main heart malformations which present together:

Clinical Presentation of Tetralogy of Fallot

The most common presentation of TOF includes a failure to thrive and difficulty feeding. Patients with TOF complicated by pulmonary atresia usually become more cyanotic 48 hours after birth, when the ductus arteriosus starts closing. Parents are likely to tell that there is something wrong with their child as a result of the feeding habit.

Tet spells are defined as the development of episodes of cyanosis. They usually happen when the child is crying or feeding. Sudden death might be due to hypoxic test spells which happen due to a sudden spasm of the infundibular septum which increases the right ventricular outflow tract obstruction.

Central cyanosis is usually evident since birth in patients with TOF. Digital clubbing can be seen at the age of 3 to 6 months.

Due to right ventricular hypertrophy, a right ventricle impulse might be felt on chest palpation. Patients with TOF are at an increased risk of infective endocarditis.

The symptoms of Tetralogy of Fallot (TOF) vary, depending on the extent of obstruction of the blood flow out of the right ventricle and into the lungs. Signs and symptoms may include:

Parents should seek medical attention once they notice some of these symptoms on their children:

The following signs will be seen on physical examination:

Diagnostic Workup for Tetralogy of Fallot

Patients with TOF usually have polycythemia due to cyanosis. Peripheral oxygen saturation is usually between 65 and 70%. Low platelets and increased bleeding time are also commonly seen in cyanotic patients with TOF.

A chest X-ray might reveal diminished pulmonary vascular markings, especially in older children. A boot-shaped heart is a specific sign of TOF and can be seen on chest X-rays.

Magnetic resonance imaging is superior to echocardiography in the assessment of the aorta, the degree of the right ventricular outflow tract obstruction, the size of the ventricular septal defects, right ventricular hypertrophy and the status of the pulmonary artery. The test, however, requires sedation in young children and is usually not suitable for sick infants.

Patients with marked right ventricular hypertrophy might have right axis deviation on an electrocardiogram.

The assessment of the pulmonary arteries, the degree of right ventricular outflow tract obstruction, the position and size of the ventricular septal defect and the presence or absence of other coronary artery abnormalities can be done by cardiac catheterization.

Differential Diagnosis of Tetralogy of Fallot

The successful diagnosis of Tetralogy of Fallot (TOF) depends on the history of the patient, presentation of the symptoms by the patients and vigilant detection of signs by the clinician. Further confirmation can be done with the help of lab and imaging investigations. For the accurate diagnosis of patients with Tetralogy of Fallot, the main symptoms and signs should be considered, which have been mentioned above.

The other clinical conditions which can confuse the diagnosis of coarctation of the aorta due to a similar presentation have been named below:

Risk factors for Tetralogy of Fallot

The main cause of TOF is not known; however, there are some risk factors that can result to contraction of the disease. They comprise of:

Treatment of Tetralogy of Fallot

Cyanotic infants should be treated as soon as possible with oxygen supplementation by an open-end cannula or a tube. Stress in infants is associated with the worsening of the cyanosis and hypoxemia; therefore, the placement of intravenous lines should be done by experienced individuals.

Once at the emergency department, the cyanotic infant should be placed on the mother’s shoulder with the knees tucked up. At this stage, the administration of morphine sulfate intramuscularly is indicated to decrease systemic venous return and suppress the respiratory drive. Patients with acidosis and hyper cyanosis should be treated with sodium bicarbonate.

Once the patient is stabilized, further medical therapy is indicated. Asymptomatic infants usually require no medical therapy. The administration of intravenous propranolol has been described to alleviate the symptoms of severe cyanosis. Propranolol mechanism of action in this scenario is the relaxation of the infundibular muscle spasm that is responsible for the acute increase in the right ventricular outflow tract obstruction. The administration of intravenous prostaglandin E is indicated in patients with TOF and pulmonary atresia to maintain the patency of the ductus arteriosus. These medical therapies are only a bridge to definitive surgical repair.

It is highly recommended that the patients undergo a complete surgical repair procedure before their second birthday. Surgical intervention before the age of 12 months has been associated with the best outcome and should be considered whenever possible.

The ideal operation for the treatment of TOF includes the primary closure of the ventricular septal effect, the resection of the stenosed area of the infundibular muscle, and the relieve of the right ventricular outflow tract obstruction. Patients should be under cardiopulmonary bypass during the procedure.

Patients who are not possible candidates for the primary repair of TOF should undergo palliative surgery to relieve cyanosis and improve the quality of life. The placement of a shunt between the subclavian artery and the pulmonary artery is successful in the relief of cyanosis and usually remains patent for years.

The following factors increase the risk for early repair of tetralogy of Fallot (TOF):

Complications of Tetralogy of Fallot

Some young adults or teenagers need additional surgery; for instance, the pulmonary valve can narrow again with the passage of time, reducing the blood flow. The surgeon may need to replace or widen the valve.

The most frequent problem observed after Tetralogy of Fallot repair is the pulmonary backflow or leaking from the pulmonary valve. The backflow from the aortic valve and tricuspid valve can also occur.

The arrhythmias associated with Tetralogy of Fallot include ventricular tachycardia, atrial flutter, and atrial fibrillation.

The pulmonary valve can narrow again over time. This will reduce the blood flow to the lungs, making the heart to work hard. Several surgical techniques are used to fix this problem.

Some VSDs can still leak, even after they’ve been successfully repaired. VSDs need to be repaired again if they’re large or are causing problems with the proper functioning of the right ventricle.