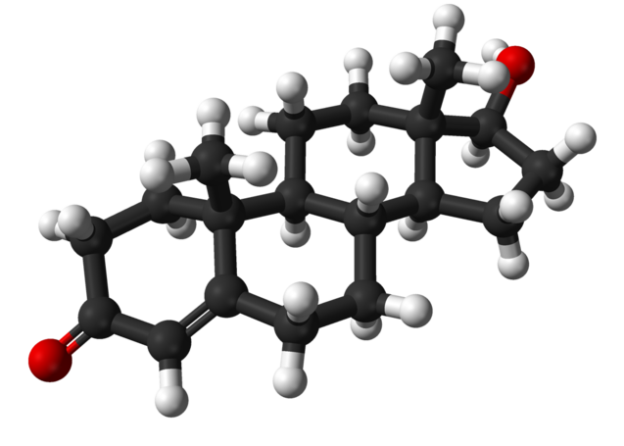 Testosterone is a 19-carbon steroid that acts as an androgen receptor agonist. This lipid-soluble molecule has a relatively short half-life (2-4 hours) and low bioavailability from the first-pass metabolism by the liver. The short half-life and the quick metabolism indicates that continuous production of testosterone is required to sustain stable levels.

Testosterone is part of a class of hormones known as androgens. Other examples of androgens include androstenedione, which is primarily produced in the adrenal glands, and dihydrotestosterone (DTH).

Testosterone synthesis in the testes

The majority of testosterone is produced by Leydig cells found in the testes. Testosterone synthesis begins when a luteinizing hormone (LH) from the anterior pituitary gland binds to a transmembrane receptor on the Leydig cells.

LH signaling initiates the conversion of ATP to cAMP. The increased concentration of cAMP initiates the production of Protein Kinase A. Protein Kinase A is required to transport cholesterol, the substrate for testosterone, to the inner membrane of the mitochondria where the first enzymatic reaction takes place.

In the inner membrane of the mitochondria, cholesterol is converted into pregnenolone by a p450 enzyme. Pregnenolone is transported to the smooth endoplasmic reticulum, the center for steroid synthesis, where the remaining enzymatic reactions take place.

Testosterone synthesis in the ovaries

Testosterone production is also important to the female reproductive system because it is the substrate for estrogen synthesis. Theca cells found in the ovaries produce testosterone in response to LH. After transportation to the neighboring granulosa cells, testosterone is converted into estrogen by the enzyme, aromatase.

Testosterone synthesis in the adrenal gland

The adrenal gland produces androstenedione in response to adrenocorticotropic hormone (ACTH), which is secreted by the pituitary gland. Androstenedione plays a role in male and female adrenarche, the first stage of puberty where axillary and pubic hair begins to grow. This hormone may also play a role in polycystic ovarian syndrome – a common condition in women that is characterized by insulin insensitivity, high androgens, and fertility issues.

Since lipid-soluble molecules are able to cross the plasma membrane bilayer, testosterone is passively transported out of the Leydig cells into the small vessels of the testes. The lymphatic system is a secondary mode of transportation.

Once inside the blood, testosterone requires a binding partner to prevent this lipid-soluble molecule from precipitating out of the blood; therefore, 97% of testosterone binds to albumin or sex hormone-binding globulin (SHBG). Within a few hours, testosterone is either delivered to the tissues or degraded and excreted.

After testosterone is delivered to the tissues, it crosses the plasma membrane through passive transport. As mentioned before, because of its lipid-soluble properties, testosterone does not require a transmembrane protein to facilitate transport.

However, once they are inside the cell, lipid-soluble hormones require another binding protein, since plasma is primarily composed of water. A protein called androgen receptor (AR) resides immediately on the other side of the plasma membrane to grab the unpaired testosterone. The pairs are translocated into the nucleus where they regulate gene expression.

“Metabolism and Fate of Testosterone” Image created by Lecturio

Testosterone generally has an anabolic effect, increasing protein production, on practically all tissues within the body. This pathway causes the long-term effects of testosterone such as increased muscle mass.

Recently, studies have identified an alternative pathway for the rapid effects of testosterone. Instead of testosterone crossing the plasma membrane, the SHBG-testosterone pair binds to a transmembrane protein, through a MAP kinase cascade, inducing changes within the cell. This rapid pathway “samples” the testosterone concentration in the blood. It may regulate spermatogenesis, neuronal activity, and gap-junction communication.

Testosterone may be converted into DTH via 5-alpha-reductase in tissues such as the prostate gland, hair follicles, and Sertoli cells. Sertoli cells, cells that support the development of sperms, reside in the interstitium of the testes together with the Leydig cells.

Adipose (fat) tissue and the liver irreversibly convert testosterone into estrogen. If testosterone is not integrated into tissues, it is converted into either androsterone or dehydroepiandrosterone in the liver. In order to make them more water-soluble, these compounds are gluconated or sulfonated. Finally, they are excreted in urine via the kidneys or in the gut through bile.

A male patient with cirrhosis (liver failure) will not be able to convert testosterone to its degraded products as fast. Peripheral adipose tissue irreversibly converts testosterone into estrogen faster than the liver can clear the built-up testosterone. As a result, such a patient will have a lower testosterone level and a higher estrogen level.

An increased level of estrogen is the reason as to why male patients with cirrhosis and pregnant women both suffer from hypercoagulability and telangiectasia (spider veins).

Testosterone affects many body tissues, so instead of memorizing a list, it is easier to comprehend its effects by understanding how it affects a particular patient.

Effects of testosterone on a fetus

Testosterone is secreted first by the genital ridge cells and then by the developing testes. Together with other signaling molecules, this hormone works to grow the testes and scrotum while preventing the development of a uterus, ovaries, and vagina.

If a male fetus’ testes were destroyed, he may develop female sex organs. Conversely, pregnant animals injected with large amounts of testosterone will bear genetically female offsprings who are phenotypically male.

Effects of testosterone on a pubescent male

Effects of testosterone on a healthy adult male

An adult man continues to produce testosterone to maintain his first and second sexual characteristics until the age of 50 when the testosterone level begins to decline. The two main effects that result from the continued decline in testosterone levels are balding and prostate growth. Though balding has a genetic component, testosterone plays a role. For example, women who are exposed to testosterone may begin to bald.

Let’s say that you have two patients who are pro-athletes – a female and a male. They both want a slight advantage over their opponents and begin taking anabolic steroids (similar to testosterone).

Apart from increasing her muscle mass, the female athlete would begin to show symptoms similar to those of a boy going through puberty: a deeper voice, hair on her face and body, balding, acne and menstrual irregularities. Under some circumstances, she may experience a boost in her athletic performance.

On the other hand, feedback loops would suppress the male athlete’s normal testosterone production causing decreased testes function and spermatogenesis, which may be permanent.

Both athletes would also increase their cardiovascular risk factors as testosterone may cause hypertension and dyslipidemia. Other side effects include liver disease, aggression, skin infections, and polycythemia.

Effects of Low Production of Testosterone

Deficiency of testosterone results in:

As mentioned previously, LH signaling initiates the multi-step conversion of cholesterol to testosterone. Testosterone creates a negative feedback loop by acting on the hypothalamus and the anterior pituitary gland to reduce the secretion of GnRH and LH. Testosterone and FSH act on Sertoli cells, which then produce inhibin.

Inhibin also acts on the hypothalamus and the anterior pituitary gland to reduce GnRH and LH secretion. 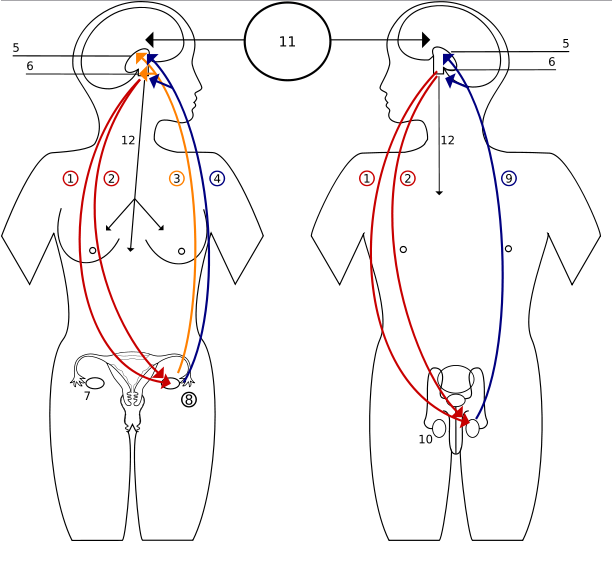 Hypogonadism is a failure or decreased production of sex hormones by the gonads that are testes and ovaries.

Hypogonadism refers to impaired functioning of one or multiple parts of the hypothalamus-pituitary-gonadal system and is marked by impaired testosterone production in males and infertility.

As mentioned before, a fetus with a testosterone deficiency will have ambiguous or female genitalia. If a hypogonadal patient is not treated during puberty, in addition to not undergoing masculinization, he may develop breast tissue (gynecomastia). Moreover, he may grow abnormally long arms because the epiphyseal plate will not close properly without enough testosterone levels.

Recently, pharmaceutical companies have advertised drugs capable of correcting low testosterone in aging men. While there is a natural reduction in testosterone after 50 years, abrupt or premature change in testosterone should be investigated. The symptoms include erectile dysfunction, infertility, de-masculinization, gynecomastia, and osteoporosis as well as symptoms similar to menopause (fatigue, hot flashes and difficulty concentrating).

The causes of hypogonadism include the following:

Diagnosis and treatment of hypogonadism

A simple blood test can detect levels of testosterone as well as other related hormones. Once a diagnosis of hypogonadism is established, further diagnosis is aimed at identifying the root cause.

Boys with hypogonadism require testosterone to develop normally. Physicians must balance the side effects of testosterone replacement therapy (TRT) with the consequences of abnormal pubertal development.

Adult men who are not concerned about fertility may be given TRT to treat erectile dysfunction and the other symptoms. However, TRT does not restore fertility. Assisted reproductive technology (ART) such as in-vitro fertilization or artificial insemination are both options for patients who wish to conceive.

1. Which of the following statements is not true?

3. Which of the following is not an effect of testosterone?

G. G. Gordon et al., Conversion of androgens to estrogens in cirrhosis of the liver, Journal of Clinical Endocrinology Metabolism. Accessed from http://www.ncbi.nlm.nih.gov/pubmed/1133151