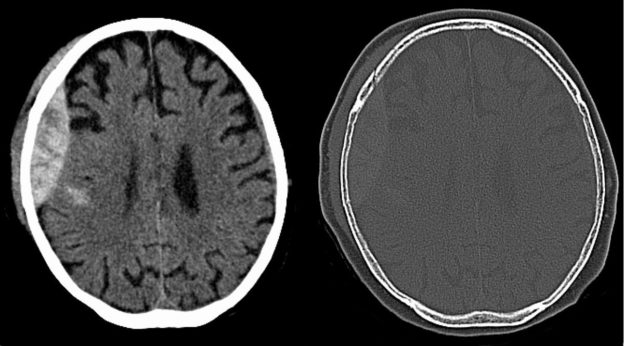 Traumatic brain injury (TBI) is an injury caused by mechanical forces transmitted to the brain due to external factors (e.g. a violent blow to the head). It is not due to degenerative changes nor congenital factors. This results in altered levels of consciousness and disturbed cerebral functions like cognition, motor, and psychosocial functions.

Trauma is a common presentation in the emergency department and can result in skull fractures and parenchymal injuries like a concussion, contusion, and diffuse axonal injuries.

A concussion is defined as a clinical syndrome of altered mental status secondary to a head injury, typically brought about by a sudden deceleration of the head.

A contusion is defined as a direct parenchymal injury.

Clinically, these differentiations are not hugely important. Whilst it is good to know them, they are not correlated well with patient prognosis or clinical presentations,  and are not used often in discussing traumatic brain injury.

Diffuse axonal injury (DAI) is a  shearing injury to the white matter caused by acceleration, deceleration, and rotation of the head.

Intraparenchymal (intracerebral) hemorrhage causes around 15% of strokes. Subarachnoid hemorrhage has an incidence of 9/100,000 per year. Patients are usually between 35 and 65 years old. TBI has a higher incidence among males as compared to females, occur at a younger age below 45 years, low socioeconomic groups, minority groups, unmarried, people with a history of substance abuse, and people with a past history of neurotrauma are at high risk to receive TBI.

The mechanisms of traumatic brain injury are varied and include diffuse axonal injuries where shearing causes neuronal cell death. Other mechanisms include raised intracranial pressure from edema, hypoxia, and ischemia. Accelerations and sudden decelerations of the head, direct blows, and blunt or penetrating injuries to the head can also cause traumatic brain injury.

Trauma can cause the rupture of the middle meningeal artery, which is a branch of the maxillary artery. This can be caused by a fracture of the temporal bone. The rapid accumulation of blood within the epidural space can lead to intracranial hypertension and transtentorial herniation.

A subdural hematoma is caused by trauma leading to the rupture of bridging veins that go through the dura. Since these vessels manage low levels of pressure, the hematoma develops more slowly and presentation may be chronic or subacute in many instances. 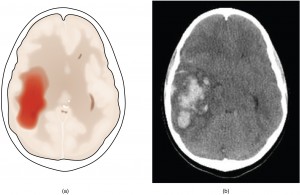 Image: “(a) A hemorrhage into the tissue of the cerebrum results in a large accumulation of blood with additional edema in the adjacent tissue. The hemorrhagic area causes the entire brain to be disfigured as suggested here by the lateral ventricles being squeezed into the opposite hemisphere. (b) A CT scan shows an intraparenchymal hemorrhage within the parietal lobe. (Credit b: James Heilman)” by philschatz. License: CC BY 4.0

Intracerebral or intraparenchymal hemorrhage causes around 15% of strokes. It is often caused by the rupture of microaneurysms (for instance Charcot-Bouchard aneurysms) or degeneration of deep arteries.

The hemorrhage is usually massive and can be fatal. It is usually associated with hypertensive patients, although patients without hypertension can also develop an intracerebral hemorrhage. These patients are typically older than 60 years, and the bleed often occurs in one of the lobes of the cerebral cortex or the deep basal ganglia.

There is a genetic component to these patients; those with particular polymorphisms in the apolipoprotein E gene are at risk of recurrent bleeds and typically have a worse long-term prognosis.

Concussions, contusions, and diffuse axonal injuries will show a history involving a blow to the head and a period of unconsciousness or being “dazed”. They may develop headaches after the injury.

Ask if they experienced any amnesia post-traumatically (e.g. do they remember the interval after the concussion). If they do not, this indicates a more severe traumatic brain injury and recovery will likely be longer and more tortuous.

Patient history will include trauma of the head. There will often be a lucid interval. Make sure you consider epidural hematoma if the patient was initially conscious after the trauma and has subsequently lost consciousness or is losing consciousness.

Remember that epidural hematomas often occur via damage to the middle meningeal artery (MMA) behind the temporal and parietal bones. Patients will typically become worse rather than better, with vomiting, a severe headache, and confusion if left to deteriorate. Patients can have contralateral hemiparesis and ipsilateral pupillary dilation. On examination, patients may have a cranial nerve III palsy which will show the eye in a “down and out” position.

As mentioned previously, bridging veins tear and bleed in a subdural hematoma. History may be chronic (weeks) or subacute (days) as the bleed is slow due to the low pressure in the venous system.

Consider a subdural hematoma in patients who have a fluctuating level of consciousness (as defined by markers like the Glasgow coma scale), even if the patient cannot remember a significant event of head trauma. Patients may suffer from seizures as the size of the hematoma increases.

They can also have focal neurological deficits, so make sure to perform a full neurological examination including the cranial nerves. However, this often occurs late on in the presentation, many weeks or months after the original bleed started.

High-risk individuals include the elderly, alcoholics, and people with a history of blunt trauma. Remember – in the elderly, the patient may not present with a history of trauma and it is important to rule out a subdural hematoma. On CT, there will be a biconcave (often described as lentiform) and dense blood collection.

This is typically caused by the rupture of a cerebral aneurysm. There will be an acute history, usually with a presentation of “the worst headache of my life”. On spinal tap, there will be bloody or yellow cerebrospinal fluid (CSF). CT is the most effective diagnostic test for this diagnosis.

Patients with hypertensive hemorrhage will show signs of a stroke, but it is difficult to differentiate them from infarct strokes. Patients with an intraparenchymal bleed will usually have a very severe headache. If left untreated, they are more likely to succumb to coma. CT is the main diagnostic factor in these cases. If intraventricular, intraparenchymal, or subarachnoid blood collections are seen on the CT, then a hemorrhagic stroke can be suspected.

If severe, there is an immediate onset of transient neurological dysfunction. This can include loss of consciousness, temporary respiratory arrest, and loss of reflexes. Patients may present with amnesia.

If left untreated, patients will have a decreased Glasgow coma score (GCS) and suffer more headaches, vomiting, and eventually, they succumb to a coma. Death occurs if the coma causes respiratory arrest. Late signs to look out for include bradycardia and raised blood pressure.

If left untreated, a subdural hematoma will gradually raise the intracranial pressure (ICP), resulting in herniation (typically tentorial) and coning of the brain tissue.

A GCS below 5 at 24 hours post-injury implies a serious injury. 50% of these patients die or go into a permanent coma. Some patients will not recover fully and will be left with cognitive impairment. Others may develop post-traumatic epilepsy or a post-concussional syndrome. This syndrome will cause patients to have dizziness, malaise, and other vague yet debilitating symptoms for months after the initial concussion.

Management is supportive and rehabilitative in nature. Intracranial pressure monitoring and assisted ventilation can be useful in severe cases of TBI. Rehabilitation is wide-ranging and dependent on the specific symptoms of the patient.

Neurosurgery is needed immediately. The patient will need clot evacuation and ligation of the bleeding vessel.

A subdural hematoma is relatively treatable compared to other bleeding disorders of the CNS. Typically, patients require irrigation and evacuation using a burr twist drill and craniotomy to relieve pressure and remove blood.

Under no circumstance should antiplatelet drugs be prescribed to patients suffering from hemorrhagic stroke. These are obviously contraindicated. In these patients, a strict control of chronic underlying hypertension is crucial. Neurosurgical clot evacuation is the immediate first step, especially if patients are experiencing coning or herniation.

The prognosis for traumatic brain injuries like concussions, contusions, and diffuse axonal injuries is highly dependent on the damage caused. Good clinical indicators are a lack of post-traumatic amnesia and a good Glasgow coma score (GCS) indicating executive functioning is intact.

Patients with contusions and diffuse axonal injuries will typically have worse clinical outcomes. Some patients may never fully recover from a coma if the TBI is severe, while others may die.

Patients that do not enter a coma or wake up from a coma post-TBI have poor outcomes. They can recover, but will often complain of post-concussive syndromes and present diffuse and non-specific cognitive symptoms like short attention span and headaches. These are clinically difficult to treat, and patients may never return to “normal”. Depression is a common complaint amongst these patients.

If the patient is identified and diagnosed quickly, then the prognosis is excellent. However, patients that are in a coma and have pupil abnormalities pre-operatively fair poorly.

Mortality in subarachnoid hemorrhage is high in those with any of these signs: neck stiffness, cranial nerve palsies, and drowsiness. Patients who develop a prolonged coma approach 100% mortality. Those that survive 1 month have a better prognosis, with 90% of them surviving after one year.

This has a very poor prognosis. It can quickly cause death and is difficult to treat surgically or otherwise. Patients who do survive may experience neurological deficits. Patients with mutations in APOE gene are at risk of having further bleeds.