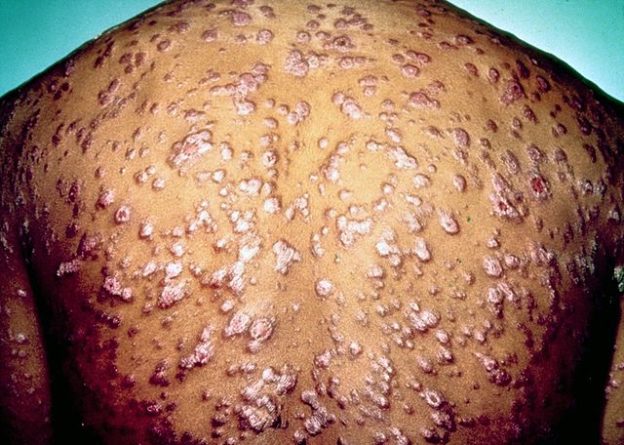 Image : “Reddish papules and nodules over much of the body due to secondary syphilis” by
Herbert L. Fred, MD, Hendrik A. van Dijk. License: CC BY 2.0

T. pallidum can be detected in clinical samples through darkfield or phase-contrast microscopy or direct immunofluorescent staining. The bacteria cannot be cultured in standard culture media.

At least 2 subspecies are known:

Syphilis is a chronic systemic disease that is transmitted sexually. The infection can be treated if detected early but manifests late and has significant morbidity if left untreated.

Syphilis can be acquired or congenital. It can also occur in children and adolescents. It is prevalent all over the world but is most common in underdeveloped countries. Sexually active groups are the most affected by the disease.

The highest incidence in the United States occurs among men who have sex with men and who live in poor, minority communities in southern states. Rates in Western Europe are 4.4–10.4 per 100,000 population. Rates are increasing in Eastern Europe and Russia.

Women with active disease are more likely to transmit the disease to their fetus than women with latent infection. Early transmission can lead to fetal loss, preterm or low-birth-weight infants, stillbirths, neonatal deaths, or infants born with a congenital disease.

The risk of transmission is highest during the first 4 years of life. Risk factors for congenital syphilis include limited access to healthcare, late or no prenatal care, maternal drug use, multiple sex partners, unprotected sexual contact, sex trade work, and inadequate treatment of syphilis during pregnancy.

Infected individuals often do not exhibit symptoms for years. The Centers for Disease Control and Prevention recommend screening of even young adults if they have lesions or positive risk factors. 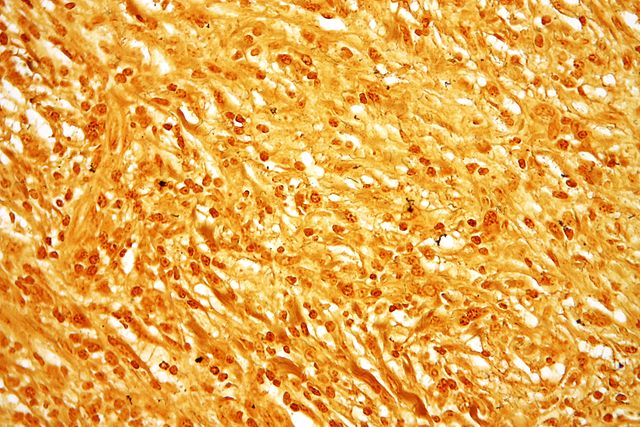 Primary disease occurs in the absence of any other disease and is characterized by a chancre and regional enlarged lymph nodes (lymphadenitis).

Initially, a small, painless papule is formed at the site of infection, usually the genitals, roughly 2–6 weeks after contact or transmission. Later, the papule becomes a clean, painless, and highly contagious ulcer with raised borders called a chancre.

Chancres are filled with T. pallidum, the organism causing the disease. Chancres can be found on extra-genital areas as well, making the disease difficult to diagnose. Lesions in the oral cavity can be misdiagnosed for aphthous ulcers or herpes. Lesions on the nipple can be mistaken for cellulitis or eczema.

Painless lymphadenopathy is a typical feature of this disease. The chancre heals after 4–6 weeks, becoming thin scar tissue. Patients who are not treated develop the symptoms of secondary syphilis after 2–10 weeks of healing.

Renal, hepatic, and ophthalmologic involvement can also occur. Approximately 30% of patients can have meningitis on cerebrospinal fluid examination, which shows pleocytosis and raised protein level. Without treatment, if the patient survives, secondary infection subsides after 1 month and then relapses after 1 year, sometimes becoming tertiary syphilis.

It is difficult to diagnose this disease through the usual investigations, but specific labs along with correlation with history and examination results can lead to a diagnosis. Syphilis should be treated if suspected clinically and on the basis of epidemiology.

The presence of T. pallidum can be confirmed by darkfield microscopy or direct fluorescent antibody testing on samples from skin lesions, placenta, or umbilical cord. Polymerase chain reaction is rarely performed. Serologic testing for antibodies is the principal diagnostic test. Patients with suspected T. pallidum infection should be screened using a non-treponemal test followed by a confirmatory treponemal test. These tests include: 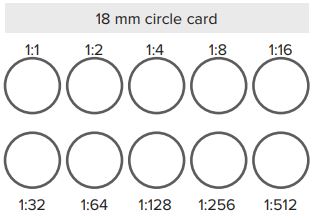 Antibodies against phospholipid antigens on the surface of the organism that cross-react with cardiolipin-lecithin-cholesterol antigens of damaged host cells are detected in these tests. Both qualitative and quantitative tests can be done for screening and monitoring the therapy. Antibody titers increase with active disease, treatment failure, or in re-infection. Titers decrease with proper treatment.

Treponemal antibody titers are positive even after initial infection and remain positive for life.

Neurosyphilis (including otic and ocular):

VDRL Test and its Interpretation via nih.gov