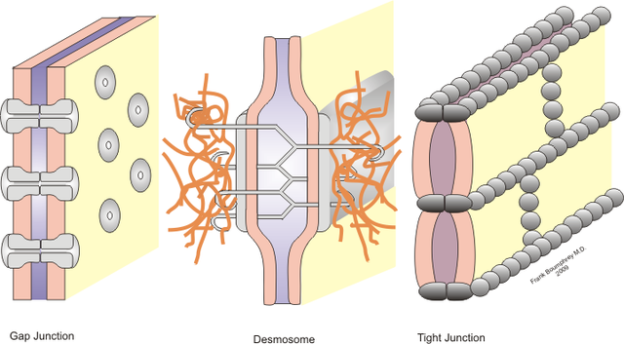 There are three basic types of epithelial cells. Each of these types is further categorized into simple (if it is a single layer of cells) or stratified (if the cells are arranged in multiple layers). 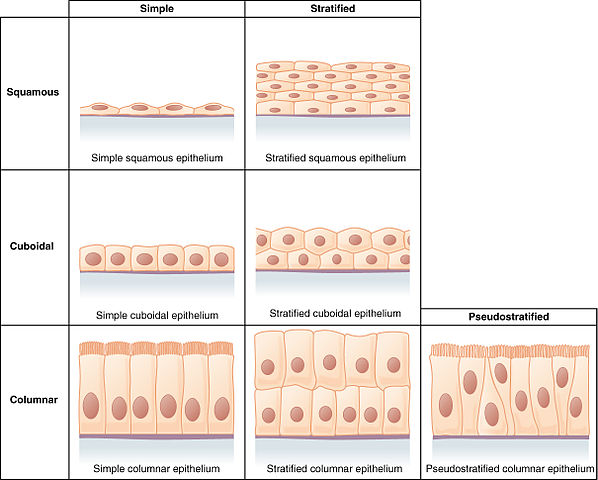 As mentioned above, the cilia are present on the columnar epithelium and produce a to-and-from motion to entrap the particles and move them in a specific direction parallel to the surface of the epithelium. Therefore, they are, in addition to other mechanical barriers, included in the primary defense of the body. The villi and microvilli are present on the absorptive surfaces as they increase the surface area for absorption without increasing the size of the epithelium.

Image: Structure of villi and microvilli present on the epithelial cells of the small intestine. By Ballena Blanca. License: CC BY-SA 4.0.

In order to move molecules from the lumen into the cells and from cells into the blood or vice versa, channel proteins and carrier proteins are present on the apical and basolateral surfaces of the epithelial cells.

The channel proteins allow small ions to move across the cell membrane. These are often gated to open and close in response to a certain stimulus.

The Na-K pump is a carrier protein that moves three Na ions out of and two K ions into the cell against the concentration gradient. An ATP molecule is broken to give the energy required for the transport of ions.

Image: A sodium–potassium pump. By OpenStax College. License: CC BY 3.0.

Aquaporins are specialized channel proteins present on the apical and basolateral surfaces of epithelial cells. These are present in areas where excessive water reabsorption is required, e.g., the collecting duct of a nephron. Aquaporins allow the transcellular flow of water molecules. 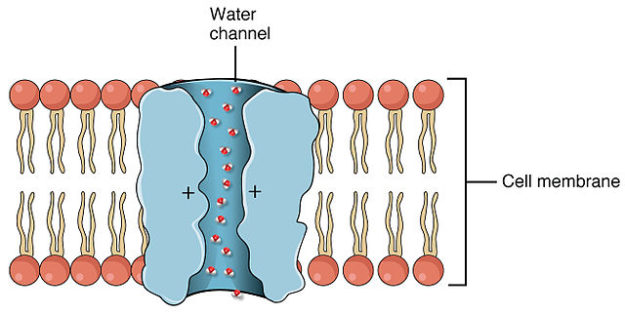 Image: Structure of an aquaporin. By OpenStax College. License: CC BY 3.0.

Tight junctions act as a barrier to regulate the movement of molecules from one cell to another through extracellular spaces by diffusion or active transport. They are present on the lateral surfaces of the epithelial cells. They can be tighter with high electrical resistance or leakier with low electrical resistance.

Gap junctions are also known as ‘communicating junctions.’ They allow the cytoplasmic connection between two neighboring cells without the involvement of extracellular fluid. The connexin proteins form a cylindrical structure between the lateral surfaces of two adjacent epithelial cells. This cylindrical structure with pores is called the ‘connexon.’ Its main role is to allow free movement between the cells of ions and small molecules.

Desmosomes are made of intermediate filaments composed of keratin and desmin. Cadherin acts as a transmembrane linker. Desmosomes are specialized to hold cells tightly together.

Hemidesmosomes form a bridge between the epithelial cells and the extracellular matrix on the basolateral surface. They have intermediate filaments as the cytoskeletal anchor and integrin as the transmembrane linker. 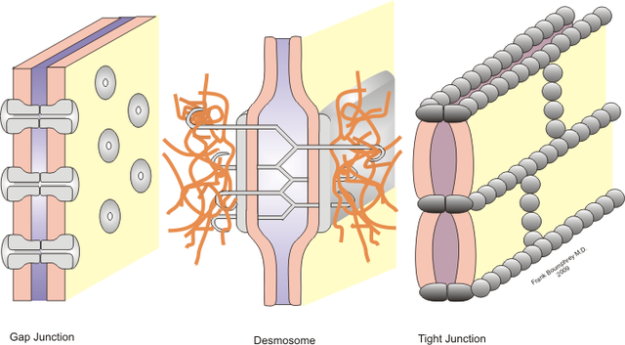 Image: Illustration of a gap junction, a desmosomal junction (desmosome), and a tight junction. By Boumphreyfr. License: CC BY-SA 3.0.

Transepithelial transport is the transport of a molecule from the lumen into the blood. In this case, the molecule, which needs to be absorbed, has to travel through more than one membrane surface.