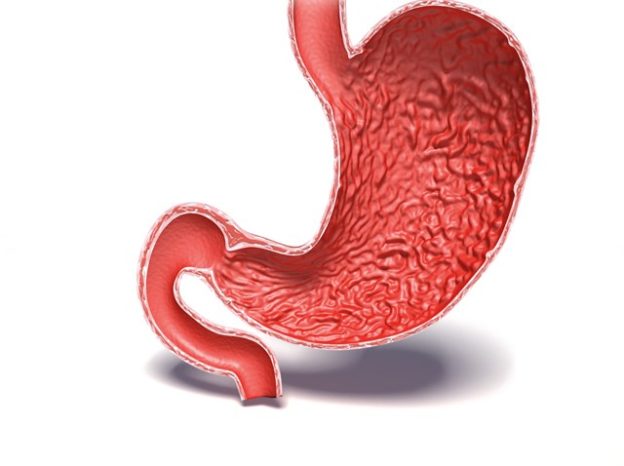 Macroscopic Anatomy of the Stomach

Position of the stomach

The stomach is located in the upper left abdomen in the epigastric region and in the left hypochondriac region. While the position of most sections of this hollow muscular sack are variable, there are 2 sections, one oral and the other aboral, which have a fixed position: The entrance of the stomach (cardia), fixated by the lower esophageal sphincter, and the pylorus, which merges into the retroperitoneal duodenum and is therefore immobile. 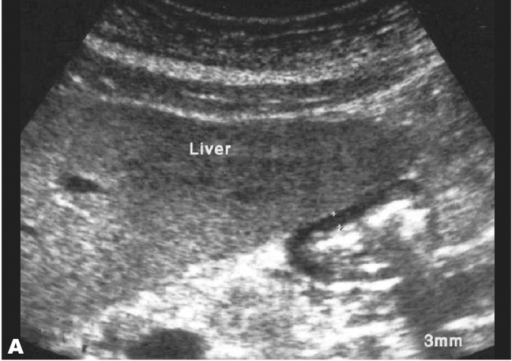 External shape of the stomach 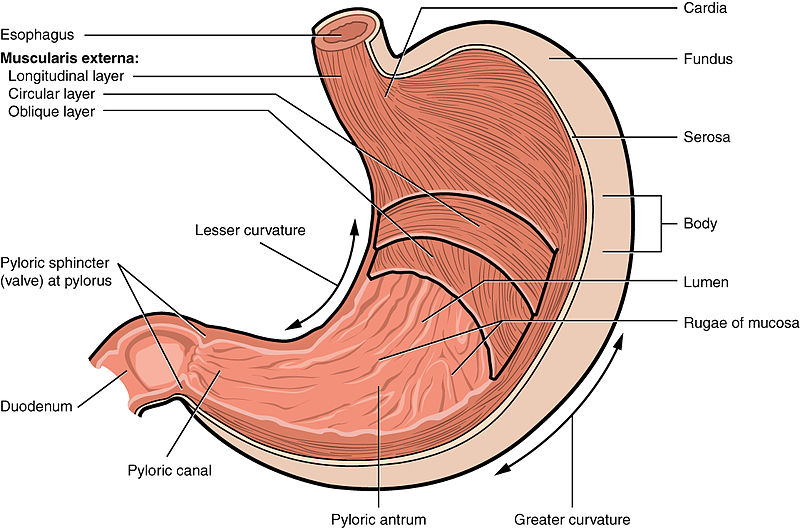 The external shape of the stomach is very variable and depends on different factors like the degree of filling (empty: anterior wall and posterior wall adjoin each other), body posture, gastric motility, and physique. In X-ray examinations, a J-shaped stomach is most often found; tall and slim (asthenic) persons often have a long, saggy stomach (ptotic) and small, stocky (pyknic) persons have a steer-horn stomach (almost horizontal).

Vascular supply of the stomach

Furthermore, the splenic artery gives off branches that supply the fundus⁠ (short gastric arteries⁠) and the posterior wall of the stomach (posterior gastric artery). 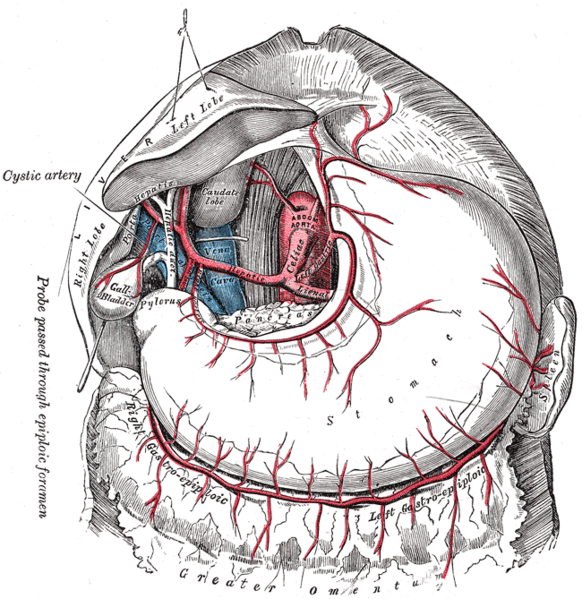 Hint: This is a popular subject in both practical anatomy classes and written exams!

Peritoneal relations of the stomach

The stomach is located intraperitoneally. From the lesser curvature, the lesser omentum (meaning ‘small net’) extends as a duplication of the peritoneum towards the liver. It originates in the ventral mesogastrium and has 2 portions, the hepatogastric ligament and the hepatoduodenal ligament which contains the portal triad. The greater omentum (‘big net’), which develops from the dorsal mesogastrium, hangs down from the greater curvature and covers the large and small intestines like an apron. The following ligaments are also part of the greater omentum:

Hint: This is a frequent topic in examinations!

Relation of the stomach to neighboring organs

With its location in the upper abdomen, the stomach has contact with different abdominal organs:

Liver: The left lobe of the liver covers the stomach on the right and ventral side.

Diaphragm: The fundus is covered by the left dome of the diaphragm which separates the stomach from the pleural cavity.

Spleen: The spleen is found on the left posterior half of the stomach in the area of the fundus. (Note: Risk of injury in gastric surgeries!)

Pancreas: The tail of the pancreas runs dorsal to the stomach. The lesser sac (bursa omentalis) separates the 2 organs.

Kidney and adrenal gland: One part of the front surface of the left kidney and the adrenal gland makes contact with the gastric body.

Microscopic Anatomy of the Stomach

Structure of the stomach wall 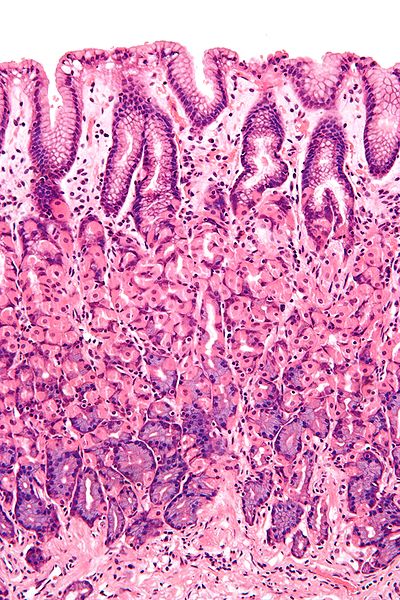 The mucosa consists, firstly, of an epithelial lamina with a single-layered highly prismatic epithelium (columnar epithelium), which is sharply separated from the multilayer squamous epithelium of the esophagus by the gastroesophageal junction called z-line (historically: ora serrata). Secondly, it consists of the lamina propria with the gastric glands; and thirdly, the lamina muscularis mucosae. 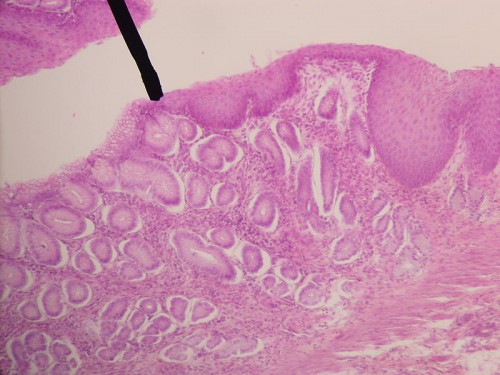 At the entrance of the stomach, there are ramified cardiac glands with wide lumina, which primarily secrete mucus. The pyloric glands in the pyloric part also produce mucus. Furthermore, there are G cells which produce gastrin, thereby stimulating the parietal cells. The largest portion of the mucosa is covered by the fundic glands, which are located in the fundus and body of the stomach. They have a narrow lumen, have a few branches, are long, and consist of the following cells:

Function of the Stomach

The stomach serves as a reservoir, which means that it temporarily stores the food before the food travels in small portions to the intestine. This is why a few large meals provide sufficient sustenance throughout the entire day. After a gastrectomy, however, meals have to be split up into various small portions throughout the day. The digestion process that started in the mouth continues in the stomach, aided by special digestive enzymes: the inactive enzyme precursor pepsinogen is converted into pepsin through contact with the gastric acid, which then helps with the pre-digestion of proteins by breaking them down into their components.

Another important task is the production of 1–3 liters of gastric juice per day. The gastric juice is a mixture of hydrochloric acid, intrinsic factor (coming from the parietal cells), mucus, and enzymes. Because of the hydrochloric acid, the pH level of the stomach is acidic, which prevents infections of the intestines by killing off most of the bacteria (except Helicobacter pylori).

Diseases of the Stomach

Functional dyspepsia (irritable bowel) is characterized by nausea, vomiting, a postprandial feeling of fullness and early satiety, and diffuse pain in the upper abdomen. In order to confirm a diagnosis of functional dyspepsia, the symptoms have to persist for more than 3 months and it is important to exclude other organic causes. Diagnostic measures include gastroscopy, sonography, and laboratory tests. The disease is harmless and is often accompanied by psychological symptoms. Symptomatic treatment is sufficient.

Acute gastritis is a sudden inflammation of the gastric mucosa whereby this barrier of mucous tissue is destroyed and mucosal bleeding can occur. Causes might be exogenous and endogenous. Exogenous factors include alcohol, drugs (acetylsalicylic acid, cytostatics), and bacteria (staphylococcus and salmonella). Symptoms are epigastric pressure pain, nausea and vomiting, and loss of appetite. A dangerous complication is gastric bleeding which is called erosive gastritis. Treatment includes temporarily reduced food intake and abstinence from alcohol and nicotine. Symptomatic treatment is possible with acid inhibitors (e.g., proton pump inhibitors) and antiemetic drugs.

In contrast to acute gastritis, patients with chronic inflammation of the gastric mucosa are normally symptom-free. Only a few patients have nonspecific pain in the upper abdomen. Chronic gastritis can be divided into the following types.

For a diagnosis, biopsies of the gastric mucosa are taken by means of a gastroscopy. Furthermore, colonization with H. pylori can be tested in 2 different ways, invasive (rapid urease test) and non-invasive (13C urea breath test). In cases of type A gastritis, autoantibodies (against parietal cells and intrinsic factor), as well as a diminished level of vitamin B12, can be found in the serum.

NOTE: Chronic gastritis can only be diagnosed histologically. 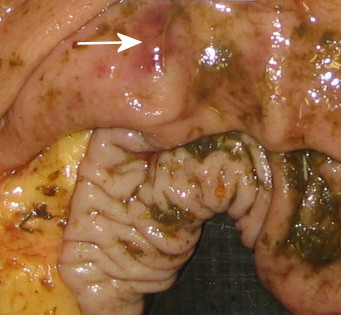 Therapeutically, a first step would be to treat any existing symptoms. Furthermore, cases of type B gastritis with the corresponding indication (e.g. ulcerative disease) can be treated with the eradication of H. pylori by means of triple therapy (proton pump inhibitor + clarithromycin + amoxicillin or metronidazole). Lack of vitamin B12, due to autoimmune gastritis, can be remedied through substitution. In addition, because of the increased risk for gastric carcinoma, a monitoring gastroscopy is recommended once a year.

Gastric ulcer is a defect of the mucosa, extending deep into its muscular layer. In most cases, it is located in the lesser curvature and the antrum. It can be attributed to different causes where a decline in defensive factors (protection through mucus) and the reinforcement of aggressive factors (gastric acid) are usually causative.

The majority of gastric ulcers are caused by colonization with H. pylori and thus, develop from chronic gastritis. However, the ingestion of NSAIDs as well as smoking (inhibiting the secretion of physiologically active prostaglandins), can lead to an ulcer. Clinically, an ulcer is often asymptomatic, although some patients have left paraumbilical pain, which can be either independent of nutrition or reinforced through food intake. Typically, however, the first symptoms appear only when complications occur. These include primarily bleeding, perforation, and penetration.

The diagnosis of an ulcer can be made endoscopically where a tissue sample should be taken to exclude a gastric carcinoma. In cases of H. pylori infection, the above-mentioned triple therapy can be administered. For the treatment of ulcers that test negative for H. pylori, proton pump inhibitors are the first-choice drug treatment. In addition, noxious agents such as alcohol and nicotine should be avoided. Surgical interventions for continuous bleedings, open perforations, gastric outlet stenosis, and carcinoma are crucial. 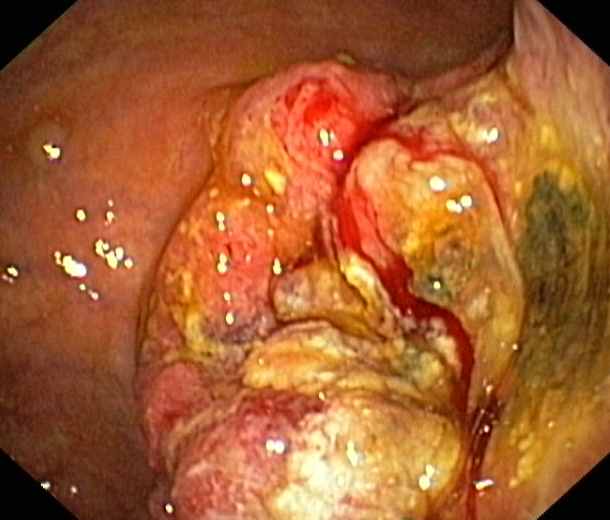 The frequency of gastric cancer peaks between the ages of 50 and 60 years and has a decreasing incidence after this. Most often, a carcinoma is found in the area of the lesser curvature and the pylorus. Symptoms are nonspecific and can range from pressure in the upper abdomen to nausea and a decrease in performance. Only in the advanced stages of the disease can it result in weight loss, iron deficiency anemia, vomiting, and dysphagia.

For the diagnosis, a gastroscopy, with multiple biopsies, is performed. Here, an early diagnosis is crucial as it considerably improves the prognosis. For curative treatment, only surgery with subtotal or total gastrectomy is considered. If the cancer is inoperable, palliative measures that improve the quality of life are employed. 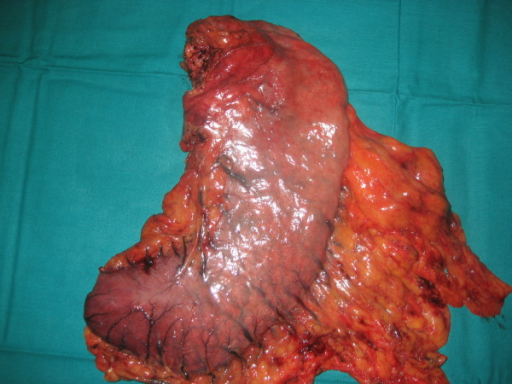 Examination of the Stomach