Synthesis of ketone bodies normally occurs in a healthy body. However, the process of ketone body formation dramatically increases during starvation. A combination of factors may explain this, which includes prolonged low levels of insulin resulting in the increase of the release of fatty acid from adipose tissues and the amount of enzymes required to utilize and synthesize ketone bodies. Also, in the liver, the increase in demand for gluconeogenesis results in a depletion of oxaloacetate, and eventually results in a decreased capacity for the TCA cycle. This results in an increase in the levels of acetyl-CoA, which is the substrate for the production of ketone bodies.

In 1926, the Nobel Prize in Chemistry was awarded to Heinrich Wieland for his pioneering work on the structure of cholesterol and bile acids. Several scientists and researchers further investigated the function of cholesterol in body systems and its synthetic pathway.

Cholesterol is the most prominent member of the steroid family of lipids. It is mostly found in animals and humans as it is the main sterol in these organisms. Only small quantities of this compound are synthesized by plants and fungi. It is an amphipathic lipid – that’s why it is an important structural component of membranes of cellular organelles and the outer layer of the plasma membrane.

All human cells and body fluids, like plasma, contain cholesterol. This may be in the form of free cholesterol or in its storage form which is a cholesteryl ester in which cholesterol is combined with a long chain of fatty acid making the cholesterol molecule more hydrophobic.

Image: “The Structure of Cholesterol” by BorisTM. License: Public Domain

Cholesterol is a sterol because it is a steroid with an alcohol group. It is a derivative of the cyclic hydrocarbon Perhydrocyclopentanophenanthrene. The structure of cholesterol is shown on the right.

Cholesterol can be synthesized from acetate in all of the tissues that are steroid-producing. Most of the cholesterol synthesis occurs in the liver, the skin, and the intestinal mucosa.

Cholesterol is biosynthesized from the triterpene squalene. The first step in the synthesis is the conversion of squalene to its 2,3-epoxide in the presence of O2, NADH, an enzyme. The next step is an epoxide ring-opening reaction that triggers cyclization. In this step, there is a loss of proton that is accompanied by a series of hydride shifts and methyl migrations. The final product for this rearrangement is the triterpene, lanosterol. A series of enzyme-catalyzed reactions then convert lanosterol to cholesterol. 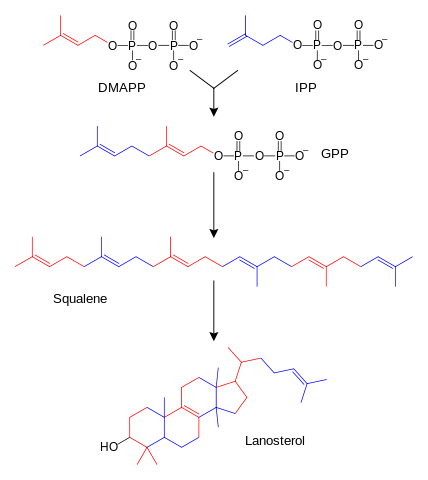 The way that cholesterol actually gets into cells is interesting. The reason that the cholesterol is in the LDLs isn’t to cause heart attacks but rather to provide a delivery mechanism for cells to get cholesterol. Cells have on their surface a receptor that recognizes and binds to LDLs. If the cell is needing cholesterol, it will grab an LDL out of the bloodstream and internalized it in this process seen in the figure. 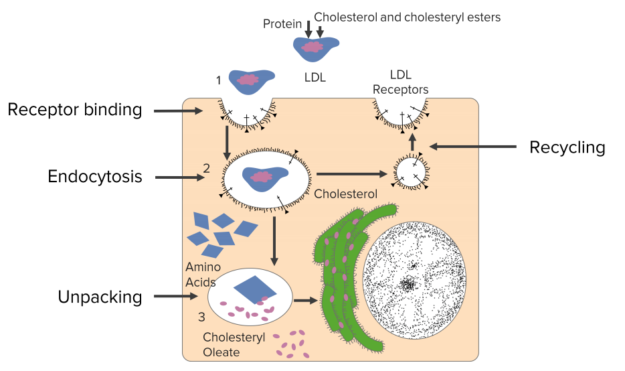 First of all, a binding process is followed by endocytosis. And this process is called receptor-mediated endocytosis for this purpose. The steps happening inside, there is actually an unpacking of the LDL that occurs, and the goodies inside including the cholesterol are used by the cell. There is recycling that happens where the remnants that aren’t used by the cells are then exported back out of the cell. And in the meantime, the cell has gotten cholesterol that it needs for the purposes of making membranes.

Steroids are low molecular weight, lipophilic compounds that are derived from cholesterol, and are important in a number of physiological processes. Steroid hormones are mainly produced by the endocrine glands (testis and ovary), and the adrenal gland, and are eventually released into the bloodstream.

Steroid plays an important role in coordinating physiological and behavioral responses to different biological processes, like reproduction. They also influence the sexual differentiation of the genitalia, as well as the determination of secondary sexual characteristics during sexual maturation and development. They also function in controlling the sexual behaviors of organisms.

The parent compound in all steroid hormones is cholesterol. The first step in the biosynthesis of steroid is the conversion of the 27-carbon skeleton of cholesterol to a 21-carbon pregnenolone. The pregnenolone is then converted to either progesterone, which proceeds to the androgen/estrogen pathways, or to 17α-hydroxpregnenolone, which provides another route for the production of androgen and estrogens.

The biosynthesis of steroids is made possible by a number of enzymes belonging to four main classes. The first class of enzymes is called desmolases. Desmolases or lyases are enzymes that work in removing parts of the original cholesterol side-chain. This enzyme requires the presence of cytochrome P-450, molecular oxygen, and the reduced form of nicotinamide dinucleotide phosphate (NADPH) as a co-factor. They are generally located in the mitochondria and are involved in an electron transport chain.

Another important group of enzymes is the hydroxylases, which are membrane-bound protein enzymes that work to remove hydroxyl groups from the parent compound. Another group of an enzyme is the hydroxysteroid dehydrogenases, which are oxidoreductases that catalyze reversible redox reactions. The last important group of the enzyme is the aromatases, which convert the A-ring in the cholesterol structure to a phenolic group in a process known as aromatization.