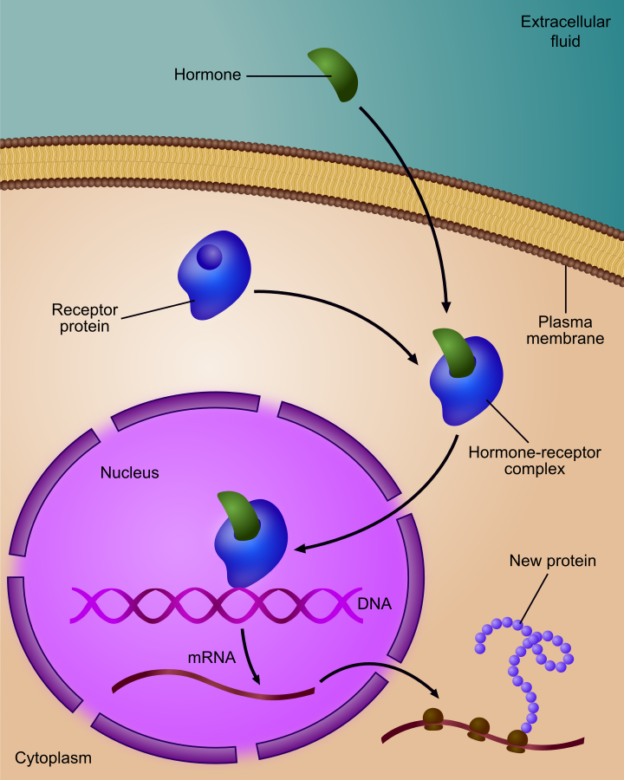 Steroid hormones are produced in the adrenal cortex, testis, ovary, and some peripheral tissues (adipose tissue). They are synthesized from cholesterol, and they cannot be stored because of their lipophilic nature. This is the reason for their immediate release from the cell as soon as they are synthesized.

Difference Between the Peptide Hormone and the Steroid Receptor

The steroid hormone can easily enter the target cell by crossing the cell membrane (unlike peptide hormones, which basically act at the level of the plasma membrane) to exert its effect. Once entered, they directly interact with cytoplasmic or nuclear receptors; then, the hormone-receptor complex activates DNA. DNA activation can have numerous effects, from DNA transcription activation, leading to the synthesis of a particular protein, to the repression of some DNA region.

The entry of the hormone-receptor complex into the nucleus is brought about by a specific part of the receptor known as the nuclear localization signal (NLS).

In addition to this, the hormone’s binding to the hormone receptor brings about a series of conformational changes in the receptor.

The resultant hormone-receptor complex binds specifically to DNA promoter and enhancer elements, thereby affecting the expression of specific target genes.
The binding of the hormone-receptor complex to the specific part of the DNA occurs via a specialized domain of the receptor called zinc finger. Zinc finger binding modulates the DNA. The further outcome is determined by the specific co-activator and the co-repressor, which binds to the complex. 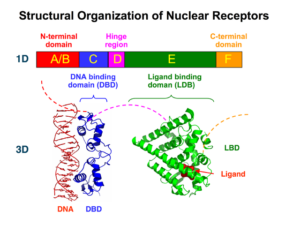 The names of the subunits mirror their function. The function of the DNA binding region is to bind with the DNA. This centrally located, highly conserved, DNA binding domain (DBD) consists of two non-repetitive globular motifs, where zinc is coordinated with four cysteine residues. Their secondary and tertiary structure is distinct from classic zinc fingers. This region controls which gene will be activated. It interacts with the hormone-responsive elements in the DNA (HRE).

The hinge region plays a prominent role in moving the hormone-receptor complex into the nucleus.

The variable region, which begins at the N-terminal, is where the sequence of amino acids is variable among different receptors.

Examples of the receptor

Hormones that bind to steroid hormone receptors include steroids (such as estrogen, progesterone, glucocorticoids), some amine hormones (such as thyroxines), and retinoids.

The nuclear receptors subfamily 3 and the 3 keto-steroid receptors are the two most commonly studied steroid hormone receptor families. The receptors of the estrogen groups form the NR3A members.

Classification of the Nuclear Receptors

Classification based on the mechanism of action

The intricacies of binding with the steroid hormones have already been described in the mechanism of action. The latest discoveries in this field have also identified other types of nuclear receptors, namely type 3 and type 4. Type 3 is basically variant of type 1 and type 4 basically is a monomer unit which binds to DNA (rather than the heterodimer). 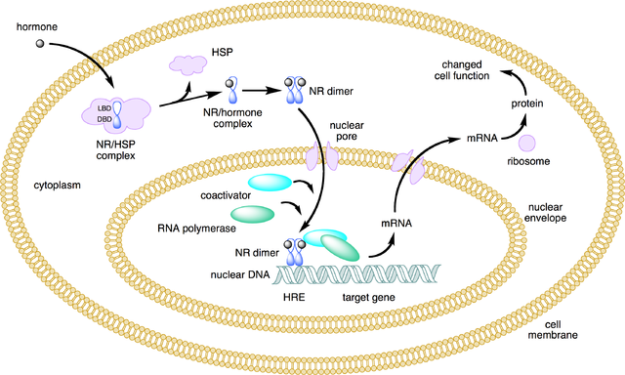 Image: “Mechanism of class I nuclear receptor action. A class I nuclear receptor (NR), in the absence of ligand, is located in the cytosol. Hormone binding to the NR triggers dissociation of heat shock proteins (HSP), dimerization, and translocation to the nucleus, where the NR binds to a specific sequence of DNA known as a hormone response element (HRE). The nuclear receptor DNA complex, in turn, recruits other proteins that are responsible for transcription of downstream DNA into mRNA, which is eventually translated into protein, which results in a change in cell function.” by Boghog2 – Made by Boghog2. License: Public Domain 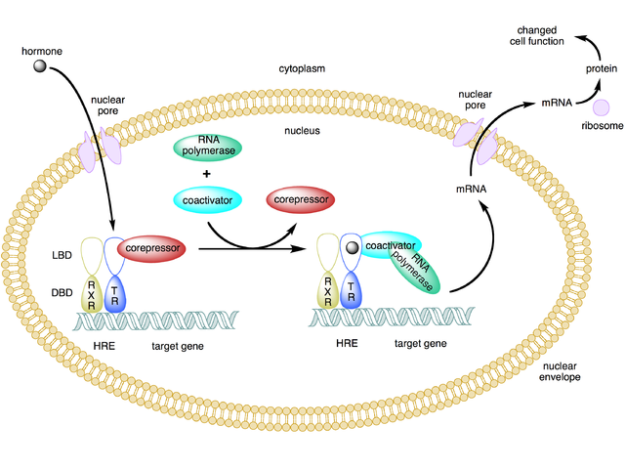 Image: “Mechanism of class II nuclear receptor action. A class II nuclear receptor (NR), regardless of ligand-binding status, is located in the nucleus bound to DNA. For the purpose of illustration, the nuclear receptor shown here is the thyroid hormone receptor (TR) heterodimerized to the RXR. In the absence of ligand, the TR is bound to corepressor protein. Ligand binding to TR causes dissociation of corepressor and recruitment of coactivator protein, which, in turn, recruits additional proteins such as RNA polymerase that are responsible for transcription of downstream DNA into RNA and eventually protein.” by Boghog2 – Own work. License: Public Domain

It should be noted that both type 1 and type 2 ultimately are related to the genomic DNA for the manifestation of their action, and there is another group, which manifests the non-genomic structures. Nuclear receptors in non-genomic structures are membrane-associated instead of being localized in the cytosol or nucleus. These membrane-associated receptors function through alternative signal transduction mechanisms, not involving gene regulation.

The aldosterone receptors are located in the tubule of the kidney, and their function is to modulate the action of the aldosterone, which binds with them. On binding of aldosterone, the activity of the Na + K+ ATPase on the basolateral membrane is increased.

In addition to this, the epithelial sodium channels, the ROMK potassium channels are also activated. Some of the hormone receptors are coupled with the signals process in the cytoplasm rather than the action of the gene level in the nucleus.

There are two types of co-regulatory proteins, namely the coactivator and the corepressor. The binding of the nuclear receptor to the response element in the DNA recruits a number of other proteins.

These proteins can have various functions ranging from chromatin remodeling to acting as bridging molecules. Generally, the coactivators have intrinsic histone acetyltransferase activity, whereas the corepressors recruit the histone deacetylase activity. The coactivators are generally recruited by the agonist ligand, and the corepressors are generally recruited by the antagonist ligand.

The sex hormone-binding globulin which generally functions in the transport mechanism has shown to be linked with the cell membrane of the cells in some of the cases, leading to the manifestation of the action of the steroid hormone. The sex hormone-binding globulin thus acts as a form of a receptor with manifestation based on the characteristic of the hormone which binds with it.

GPR30 is a form of G protein-coupled receptor that functions as a steroid hormone receptor and binds estrogen. It is well known that in the central nervous system, the neurosteroid that can bind to the GABA channels at the glutamate NMDA receptor. Progesterone acts at one of the most important cation channels in the sperm which modulate the motility of the sperm known as the CATSPAR channel.