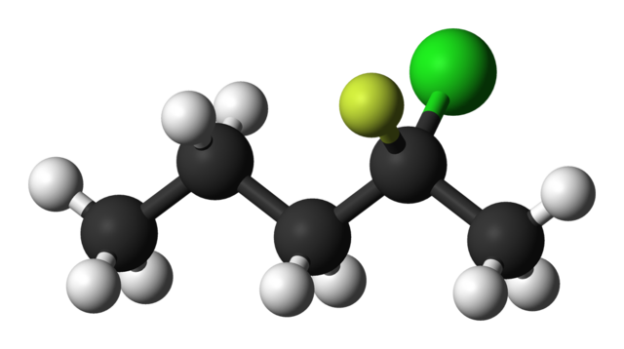 Jean-Baptiste Biot first discovered the optical activity of molecules in 1815. In 1848, Louis Pasteur, who is credited as being the first stereochemist, observed that tartaric acid salts could rotate plane polarized light (i.e., be optically active), while other salts from other sources could not. In 1874, Jacobus H. Vant Hoff and Joseph A. LeBel proposed the Theory of Organic Structure in Three-Dimensions which theorized that:

Molecular structures without reflection symmetry (no plane of symmetry) are called: dissymmetric or chiral. If a symmetry axis Cn (n > 1) is also absent, the structure lacked all elements of symmetry and called: asymmetric.

Chirality (from the Greek word cheir, meaning “hand”) is the geometric property displayed by any object that is non-superimposable on its mirror image.

The main structural feature responsible for chirality is the presence of dissymmetry; as it has no plane of symmetry (as previously explained).

The best way to describe chirality is by looking at the right and left hands. They have the same number, size, and order of fingers, but their mirror images are not the same. The left hand’s mirror image cannot be placed directly on top of the right hand (hence, non-superimposable). 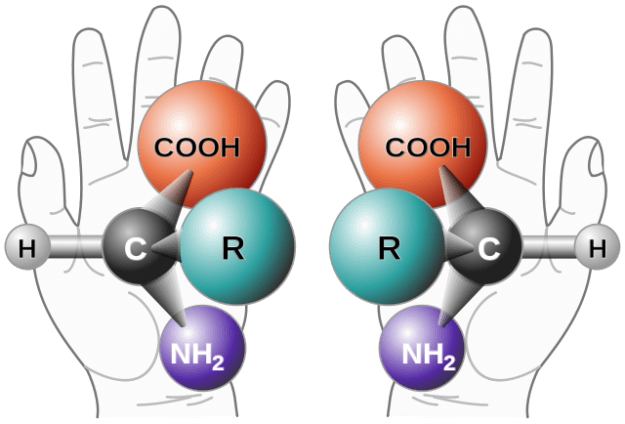 Image: “Two enantiomers of a generic amino acid that is chiral” by NASA, License: Public Domain

Chiral center (Stereogenic center, stereocenter) is a carbon atom that carries four different atoms, or a group of atoms.

Isomers are different compounds having the same molecular formula, but different structures. There are two types of Isomers:

They have the same physical and chemical properties except:

A) Direction of rotation of plane-polarized light:

Note: A racemic mixture is one with equal ratios of enantiomers (a 50:50 mixture). Therefore, it is optically inactive.

B) They react differently with chiral compounds. 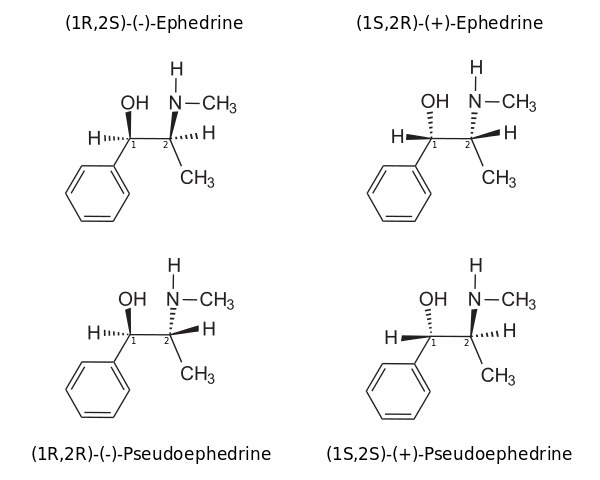 One of the methods used in distinguishing one enantiomeric form from another is the evidence of rotation of plane-polarized light, which is shown as (+) / (-) or d / l. However, this method does not describe the spatial arrangement around the chiral center—the configuration.

A system of nomenclature has been established to represent the absolute configuration: the Cahn-Ingold-Prelog rules. These rules apply when the substituents around the chiral center are ordered (assigned priorities) from the largest to the smallest, according to their atomic number.

Image: “Two examples of stereocenters. The lowest substituent (number 4) is shown only by a wavy line and is assumed to be behind the rest of the molecule. Both centers shown are S isomers.” by Calvero. License: Public Domain

The lowest assigned priority group is placed towards the back. Then, the direction (clockwise or counter-clockwise) of a line connecting the remaining groups in descending order, from the highest priority to the lowest, is determined. Therefore:

Nearly all of the biological environment consists of enantiomeric molecules—amino acids, nucleosides, carbohydrates, and phospholipids are all chiral molecules.

It has been shown that one enantiomer of a molecule can be much more active, pharmacologically, than another enantiomer.

In 1933, Easson and Stedman proposed that only three groups (b, c, d) out of the four (a,b,c,d) arranged on the central carbon of an enantiomer can be involved in the process of reaction. The receptor has three groups (b’, c’, d‘). The maximum physiological effect of a drug occurred when the groups b, c, and d in the drug coincide, respectively, with b‘, c‘ and d‘ in the receptor. 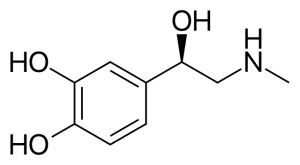 The action of the enantiomers of the epinephrine supported these results. It was determined that (-)-epinephrine is 12-15 times as active as (+)-epinephrine.

Thalidomide was first introduced in Germany in 1957. It was used to alleviate morning sickness in pregnant women. However, it was soon discovered to cause birth malformations such as phocomelia, Amelia and, in extreme situations, death. Re-examination of its formulaic property revealed that the two enantiomers of Thalidomide exert different effects:

This is because each one fits a different active site of a specific enzyme, producing a different biological effect.

Enzymes are chiral molecules and can be distinguished between the two enantiomers of a chiral substrate. This is similar to the right glove fitting exactly onto the right hand, but poorly fitting the left hand.

A final example of chirality is the two enantiomers of the chemical compound carvone, in which: