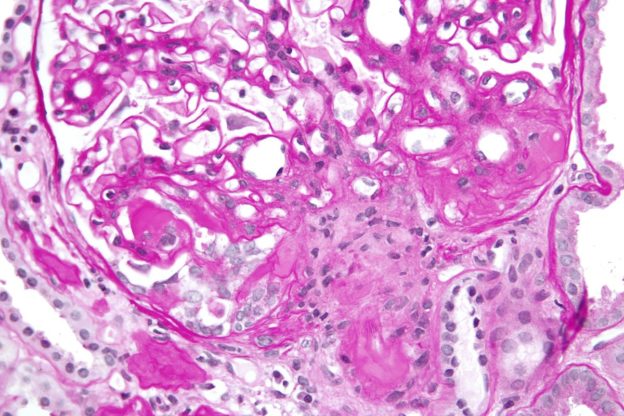 Starling’s Law of the Capillary

Starling’s laws represent the movement of fluid across a capillary membrane. The law is represented by four different forces: 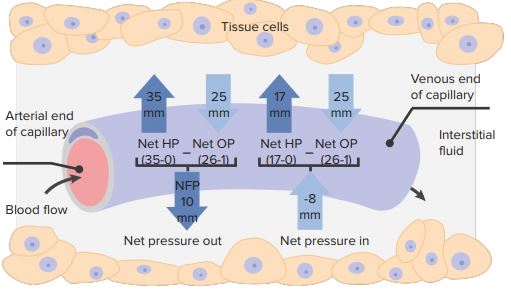 “Starling´s law of the capillary” by Lecturio

These forces can be represented as an equation for the net filtration pressure:

On top of the Starling forces, the capillaries themselves have a permeability constant (CAPp), which represents filtration.

From the net filtration pressure and CAPp, you can calculate the net fluid flow:

Extravasated fluid is either transudate or exudate, depending on the causative mechanism and the altered force in the equation.

A transudate is an excess fluid that is protein poor due to increased capillary pressure. It will have a low specific gravity <1.012, a fluid protein to serum ratio <0.5, and LDH 1.012, a fluid protein to serum ratio of >0.5, and LDH >0.6. It is likely to arise from conditions that lead to low protein levels, such as malnutrition and protein-losing enteropathies.

An exudate is an excess fluid that leaks around the capillary cells, usually because of inflammation due to infections and malignant processes. The fluid is exudate if the effusion protein/serum protein ration > 0.5, effusion LDH/serum LDH ration > 0.6, and the effusion LDH level > two-thirds the upper limit of the lab’s range of serum LDH.

Edema refers to excess fluid that has extravasated into the interstitium of the surrounding tissue. There are two forms of tissue edema: pitting and non-pitting 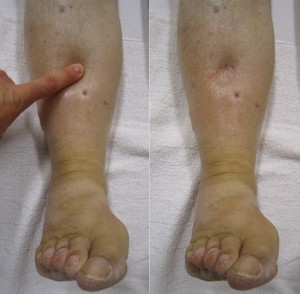 Image: “Pitting edema during and after the application of pressure to the skin.” by James Heilman, MD. License: CC BY-SA 3.0

Pitting edema is caused by excess fluid without extra colloid. Non-pitting is the inverse, where there is an excess of colloid.

The difference can be detected clinically by applying tactile pressure for a sustained period to an area over a bone, such as the lateral malleolus of the ankle. The force presses the fluid out of the tissue and into the surrounding interstitium, leaving a divot or pit in the skin.

Non-pitting edema is usually caused by lymphatic problems that have led to a blockage. When you apply pressure to non-pitting edema, such as on the lateral malleolus, the fluid will not leave the tissue because the protein keeps it in place. Any divot will resolve quickly.

Edema is caused primarily by the following pathophysiological states:

Heart failure is a condition in which the heart is unable to pump enough blood to the rest of the body. When the heart pumps blood less effectively, fluid starts to build up, causing edema.

Left-sided heart failure is characterized by the left ventricle’s inability to pump blood to the rest of the body. This failure results in a backup of blood within the pulmonary system. Signs and symptoms include pulmonary edema, orthopnea, and paroxysmal nocturnal dyspnea.

Pulmonary edema in left-sided heart failure is due to increased capillary pressure and increased pulmonary venous pressure. This increase in pressure pushes transudate into the interstitium and then the alveoli. There are three stages of pulmonary edema.

In addition to heart failure, other causes include alveolar-capillary barrier damage or idiopathic causes. Eventually, pulmonary edema can lead to respiratory fatigue and failure.

Diagnosis can be made with a chest X-ray which would show hila prominence, and patchy infiltrates throughout the lungs.

Treatment will include oxygen support, diuretics (furosemide), and a low salt diet.

Right-sided heart failure is characterized by the right ventricle’s failure to pump blood to the pulmonary system. This results in blood building up in the liver and the periphery. Signs and symptoms include increased jugular venous distension, peripheral edema, and hepatomegaly.

Peripheral edema will occur in right-sided heart failure. Increased capillary pressure results in a cosmetically undesirable swelling bilaterally in the lower extremities. Bed-bound patients can have pitting edema on the back because of low colloid content.

Leg edema because of heart disease can make the legs feel heavy. The legs may easily weigh a few extra pounds, which makes walking difficult. Severe leg edema can cause skin ulcers because it interferes with the blood flow.

Signs and symptoms include swollen lower extremities, difficulty with ambulation, stasis dermatitis, and lasting tense edema. Treatment can include positional changes, where the lower limbs are elevated for 30 minutes up to four times a day, compression stockings, and reduced dietary salt intake. Medical treatment includes diuretics such as furosemide.

Diseases that result in protein wasting cause a loss of capillary osmotic pressure and result in fluid leaving the capillaries and entering the interstitium.

A nephrotic syndrome is a group of conditions characterized by proteinuria of nephrotic range (approximately 3-3.5 grams of proteins in a 24-hour period). The loss of protein leads to a lower albumin level and subsequent edema due to a loss of oncotic capillary pressure.

For the USMLE, you should know the difference between the primary (disease of the kidney) and secondary causes (from a systemic illness) of nephrotic syndrome. You should review further each cause and know its pattern on path imaging and pathophysiology. 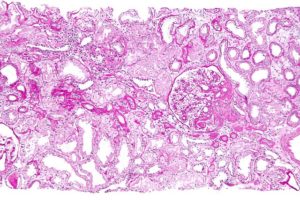 Focal segmental glomerulosclerosis is the most common form of nephrotic syndrome seen in African Americans and Hispanics. It is characterized by segmental sclerosis and hyalinosis on histology.

Minimal change nephropathy is seen in the pediatric population. This usually occurs after a recent infection or immunization. The children will look puffy in the face, particularly in the periorbital. Path imaging will show minimal change of the glomeruli. The condition can be treated with steroids.

Membranous nephropathy is the number one nephrotic syndrome seen in Caucasians. It is caused by phospholipase A2 antibodies, response to NSAIDS, HBV, or HCV and leads to chronic renal disease.

Diabetic glomerulonephropathy is caused by glycosylation of the glomerular basement membrane, which results in a diffuse mesangial expansion in the glomeruli. ACE inhibitors help to reduce kidney injury by preventing hyperfiltration.

Liver cirrhosis leads to portal hypertension, which can result in ascites. The ascites is a transudate due to an increased amount of fluid entering the space of Disse. Cirrhosis also results in low levels of albumin and other proteins in the blood. Sometimes, fluid leaks into the abdomen, resulting in leg edema. Signs and symptoms include abdominal distension, shifting dullness, and an enlarged flank. Paracentesis to check the protein levels will show protein that is less than 2.5g/dL. Treatment involves a low salt diet and diuretics. In severe cases, the fluid must be drained.

Increased capillary permeability is seen in conditions such as distributive shock. It results in a serious condition where there is a physiological state of low systemic vascular resistance and high cardiac output. There are several types of distributive shock you should know for the USMLE.

Increased capillary permeability is seen in conditions such as distributive shock. It results in a serious condition where there is a physiological state of low systemic vascular resistance and high cardiac output. There are several types of distributive shock you should know for the USMLE.

For the USMLE, it is important to remember that septic shock originates from SIRS. SIRS has four criteria, only two of which are needed to make a diagnosis:

It is defined as sepsis if two blood cultures come back positive for bacterial growth. It then becomes septic shock when there is hypotension that results from circulatory compromise with cell and metabolic abnormalities. Patients will present with a high cardiac output, severe hypotension, a widened pulse pressure, normal capillary refill, and warm extremities. The blood pressure also does not correct with the administration of IV fluids. Treatment includes antibiotics, IV fluids, and vasopressors such as norepinephrine.

Anaphylaxis is another form of distributive shock, where there is an IgE-mediated mast cell and basophil-mediated release. Causes of anaphylaxis include food and animal allergies.

These mediators result in smooth muscle spasm, vasodilation, and vascular permeability. In the bronchus, there are increased secretions and smooth muscle tone.

The vascular effects include decreased vascular tone and increased capillary permeability. These result in hypotension and vasodilation. Vascular fluid can rapidly shift to the interstitium within 10 minutes of the onset of anaphylaxis.

Anaphylaxis is a medical emergency that needs to be treated rapidly in severe cases. Proper airway management, fluid resuscitation, and the administration of epinephrine intravenously or intramuscularly.

Toxic shock syndrome is associated with tampon use in females that remain inserted for longer than the recommended period. The most common infection is from S. aureus and S. pyogenes. These bacteria release a toxin that is absorbed by the patient. The toxin acts as a superantigen that binds to T cells, causing a large cytokine release. Signs and symptoms are fever, rash, hypotension, desquamation, confusion, muscle aches, seizures, headaches, and can lead to multi-organ failure.

Burns, depending upon their severity, will cause different levels of edema. Burns covering more than ~30% of the total body surface area create a condition where blood plasma can leak out of capillaries due to inflammatory mediators. Within eight hours of a large burn, the patient can have hypovolemia and hypoproteinemia. Prompt fluid resuscitation, as well as thermal regulation, are required.

USMLE pearl: You may get a question about estimating the total body surface area based upon burn location. The rule of 9’s is a quick and well-supported method to determine how much of the body is burned. The head is 9%, each arm is 9%, the trunk’s front and back are 18% individually, each leg is 18%, and, finally, the genitals make up 1%. You should review a diagram of this for visual reference.

Interstitial fluid colloid osmotic pressure increases result in conditions such as lymphedema. The lymphatic drainage serves as the main route for the removal of interstitial fluid. Dysfunction of the lymphatic vessels results in edema and can exacerbate edema induced by other causes. 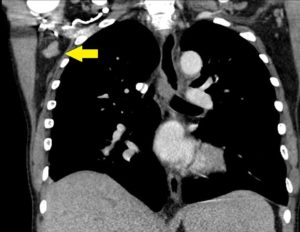 Image: “CT scan of axillary lymphadenopathy in a 57-year-old man with multiple myeloma.” by Mikael Häggström – Own work. License: CC0 1.0

Patients can present with skin changes of peau d’orange and elephantiasis. Causes include congenital hypoplasia of lymphatics (Milroy disease), malignancy, obesity, or surgery.

Malignancy that metastasizes can lead to blockage. Surgery to remove tumors and lymph nodes, paired with radiotherapy, can lead to lymphadenopathy. This is very common in breast cancer.

Treatment for lymphadenopathy depends upon its etiology. Treatment can restore function in cases of infection or malignancy. In the case of congenital or fibrosis lymphatics, life-long treatment with physical therapy and wrapping of the affecting limb may be necessary. Often, the overlying skin can have trophic changes, making it more vulnerable to infection that can be avoided with proper skincare.

Complex decongestive therapy (CDT) is recommended as a treatment. The treatment begins with an intensive phase, which involves daily treatment and training. Maintenance therapy follows; the patient is encouraged to take over their own care using the techniques that they have learned.

There are four CDT components.

Although surgery is less effective than non-surgical therapies, liposuction has some benefits. It removes fat from the affected area, resulting in less swelling.

Patient education: Edema (swelling) (beyond the basics) via uptodate.com

Clinical Manifestations and diagnosis of edema in adults via uptodate.com