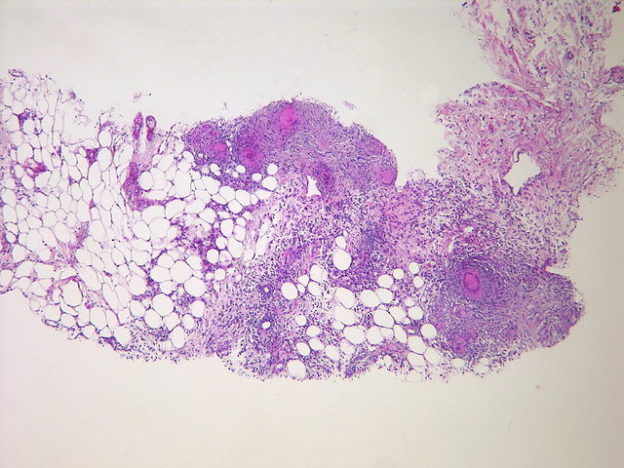 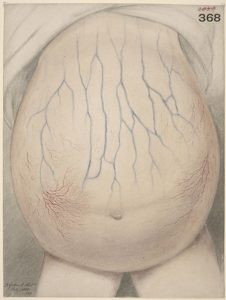 As mentioned, ascites can be a secondary manifestation of liver cirrhosis. The latest theory that is being adopted by most physicians to understand the development of ascites in this condition is the peripheral arterial vasodilation hypothesis.

The collection of fluid in the peritoneal fluid among patients with liver cirrhosis starts as the portal pressure increases. The high pressure in the portal circulation causes an increase in the production of circulating nitric oxide, a potent vasodilator, in an effort to normalize pressure.

However, this also results to the vasodilation of the more peripheral blood vessels, causing a compensative increase in the body’s effort to conserve blood volume and increase systemic blood pressure all the more. The production of vasoconstrictors and sodium-retentive substances in the body increases. However, there is a tendency for the function of the kidney to seize, causing a decompensation.

Since there are a lot of factors that can trigger the development of ascites in patients, many mechanisms could also explain the pathophysiology underlying each case. Most of these are related to malignancies.

For patients having primary liver tumors and liver metastases, the ascites can be explained in a similar fashion with that caused by cirrhosis. Tumor cells could block any part of the portal circulation, leading to the same mechanism used to describe how portal hypertension causes ascites.

For other forms of malignancies such as lymphomas, ascites can develop as lymph vessels and lymph nodes are occluded by tumor cells. The normal drainage of excess peritoneal fluid is impaired. Additionally, some lymphatic vessels could rupture, causing fatty fluid to leak out and cause imbalances in the pressures between the intravascular and peritoneal spaces.

Still, other non-malignancy-related factors could cause ascites in many different ways. The ectopic production of protein-rich fluid in tuberculosis and the leakage of fluid from the bloodstream to the peritoneal space are only a few of the mechanisms.

There are 5 determinants used in order to classify the type of ascetic fluid infection present in a patient. These include:

In order for a diagnosis of monomicrobial non-neutrocytic bacterascites can be made, there has to be a positive culture for an organism from samples taken from the peritoneal fluid despite a polymorphonuclear count lower than 250 cells/mm2 in the peritoneal fluid and the absence of any breaks in the integrity of the intra-abdomen. This classification is previously called asymptomatic bacterascites but was later changed because some patients do exhibit manifestations related to the condition.

Culture-negative neutrocytic ascites are diagnosed when there is a polymorphonuclear cell count greater than 250 cells/mm2 but with a negative peritoneal fluid culture result and no apparent explanation for the rise in the polymorphonuclear count. No antibiotics should have been given before coming up with this classification.

When there is a positive culture result in the presence of an elevated polymorphonuclear cell count (greater than 250 cells/mm2) and a surgically treatable source of intraabdominal infection, secondary bacterial peritonitis is used as a classification. This usually requires emergency surgical treatment.

There are polymicrobial bacterascites when there is more than one organism identified in the culture of the peritoneal fluid despite a low count of polymorphonuclear cells (less than 250 cells/mm2). In this classification, a traumatic or problematic paracentesis is usually implicated. The presence of many types of organisms in the peritoneal fluid could indicate bowel perforation by the paracentesis syringe.

Finally, a diagnosis of spontaneous bacterial peritonitis is made when there is a positive culture in the ascitic fluid and a polymorphonuclear cell count of more than 250 cells/mm2. Both of these are observed without the presence of a surgical break in the intra-abdominal space. What differentiates this classification to secondary bacterial peritonitis is that this classification does not need emergency surgical management as the infection is not caused by a visible focus of infection (abscesses, intestinal perforation, etc.)

Cirrhotic patients have immune dysfunction and excessive activation of pro-inflammatory cytokines that predisposes them to infections. Bacterial translocation or the migration of bacteria from gut lumen to systemic circulation is also seen in cirrhotic patients.

The most recent body of evidence suggests that the development of spontaneous bacterial peritonitis starts when there is bacterial overgrowth in the intestinal lumen. Once the population of the bacteria reaches certain numbers, they tend to translocate to the mesenteric lymph nodes, leading to the eventual invasion and colonization of the bacteria in the ascitic fluid.

Most of the time, the signs and symptoms of spontaneous bacterial peritonitis are visible but are often subtle at the time of diagnosis. An example of the manifestations that could alert a patient with ascites for a possible infection is a slight change in mental status.

This fact also contributes to the morbid and even fatal nature of this condition because it could delay the prompt management needed for these patients. Any delays in the diagnosis and treatment of spontaneous bacterial peritonitis could result in the death of the patient.

In culture-positive diagnoses such as spontaneous bacterial peritonitis and monobacterial non-neutrocytic bacterascites, the most commonly associated microorganism include Escherichia coli, Streptococci and Klebsiella. They are most active in causing disease among patients who have not undergone selective intestinal decontamination. (Patients who do undergo decontamination often have Gram-positive organisms cultured from their peritoneal aspirate.)

Recent trends include more cases with gram-positive bacteria including extended-spectrum β-lactamase–producing enterobacteriaceae being found as the etiologic agents. Multidrug-resistant infections are increasing due to nosocomial origin of infection, long-term norfloxacin prophylaxis and recent use of β-lactam antibiotics.

As mentioned, spontaneous bacterial peritonitis and secondary bacterial peritonitis differ in significant ways, one being how many types of bacteria are present in the peritoneal aspirate. Since the latter is most likely caused by perforations in the intestines, it tends to involve more than one microorganism.

Cirrhosis in itself is a major risk factor for the development of spontaneous bacterial peritonitis because of the many changes in the immune defense mechanism associated with it. It has been said that it is a form of an acquired immunodeficiency. Patients with cirrhosis are also found to have low protein levels in their ascitic fluid.

Although not as related to spontaneous bacterial peritonitis as compared to other secondary forms of ascitic infections, paracentesis is known to be one of the risk factors. Poor techniques employed during this procedure could result in the colonization of skin flora, such as Staphylococcus aureus in the supposedly sterile environment in the peritoneum. Intestinal perforation, a complication of this procedure could also result in peritonitis.

Another risk that must be looked into is gastrointestinal hemorrhage. Spontaneous peritonitis is known to develop from this through a shock-mediated translocation of the bacteria inside the intestinal lumen.

Proton pump inhibitors if used in cirrhotic may increase the risk of SBP and they should be administered carefully in cirrhotic patients.

In order to maintain a good prognosis for patients having spontaneous bacterial peritonitis, a high index of suspicion should be employed. There should not be any delays in the performance of a diagnostic paracentesis. It is important to note that some non-specific signs and symptoms such as fever and pain in patients with ascites should indicate the need for further evaluation and prompt treatment.

Usually, an impression of ascitic fluid infection is immediately documented once there is an elevation of the polymorphonuclear cell count of the peritoneal fluid aspirate. From this, further workup is done to prove otherwise. Furthermore, a predominance of neutrophils in this count supports the first impression.

In most cases, clinical manifestations do not delineate patients having either spontaneous or secondary bacterial peritonitis. This puts an important role for paracentesis as a diagnostic tool in the prompt diagnosis and treatment of the specific type of peritonitis a patient may have.

To improve the yield 10 mL of peritoneal fluid can be placed directly into a blood culture bottle. Because bacteremia is frequently encountered a blood culture should be simultaneously evaluated.

For patients having an elevated polymorphonuclear cell count (above 250 cells/mm2) in the peritoneal fluid, an individualized empirical antibiotic treatment should be started immediately. A follow-up paracentesis is usually done 2 days after the initial aspirate is studied for the number of polymorphonuclear cells.

Although many conditions such as carcinomatosis, pancreatic ascites, hemorrhage into the ascitic fluid and tuberculous peritonitis may result in high polymorphonuclear cell count without the presence of bacteria, it is important to note that physicians are suggested to start antibiotic treatment nonetheless. If the count is fluctuating instead of decreasing even after antibiotic treatment, and when diagnoses other than bacterial peritonitis are established, the regimen may be discontinued 48 hours after.

The antibiotics that are commonly used for patients with bacterial peritonitis include cefotaxime, ampicillin, tobramycin, ofloxacin, ciprofloxacin piperacillin/tazobactam, ceftriaxone, and amoxicillin-clavulanic acid.

Treatment with a carbapenem is appropriate if a nosocomially acquired PBP is suspected until culture results become available.

Once the culture results are available, the antibiotic regimen should be adjusted accordingly. Treatment of the infection usually lasts 10 to 14 days. However, studies have shown that even after the first dose of cefotaxime, the peritoneal fluid culture already becomes negative. For typical presentations, a follow-up paracentesis is usually not needed once the patient responds to the treatment.

Albumin supplementation is an important adjunct in SBP treatment. Liver transplant is the definitive treatment.

It is always important to identify any present risk factors in patients having ascites. These may include a low ascitic fluid protein content, Cirrhotics with increased risk for SBP include those with ascitic-fluid total protein level <1.5 g/dL (Harrison’s 20/e) variceal hemorrhages such as in liver cirrhosis and a history of spontaneous bacterial peritonitis.

A prophylactic regimen of trimethoprim-sulfamethoxazole, norfloxacin or ceftriaxone may help in reducing the predisposition of the patient to developing the infection. Methods to control other risk factors such as hemorrhage from ruptured varices should also be employed. Recently, Rifaximin, a nonabsorbable antibiotic, has been found effective in prophylaxis of SBP

SBP has a high recurrence rate up to 70% patients experiencing a recurrence within the 1st year. SBP is associated with very high mortality ranging from 30% to 90% at 1-year.