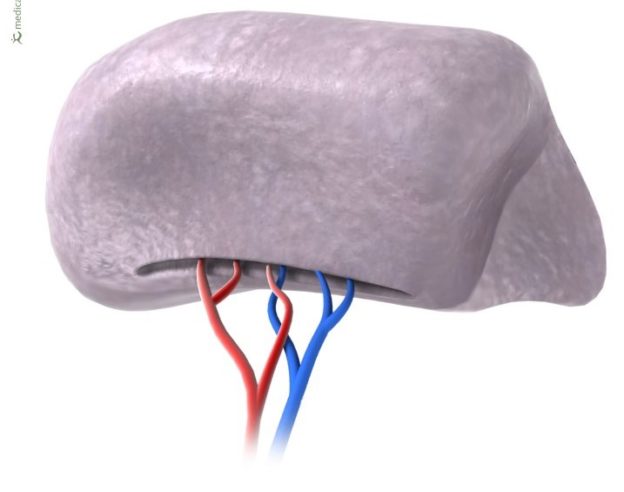 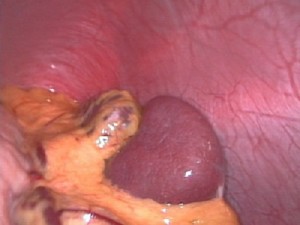 Thus, the spleen is situated between the fundus of the stomach and the diaphragm. The spleen is very vascular and reddish-purple; its size and weight vary. The healthy spleen is not palpable. It can be palpated when it is enlarged (splenomegaly). The causes of splenomegaly include infections (mononucleosis), metabolic disorders (Gaucher’s disease), or tumors (see below).

The splenic tissue itself is very soft and filled with blood that trickles through the parenchyma and clears off its old and deformed RBCs and WBCs. However, the spleen is surrounded by a fibrous capsule (tunica fibrosa) made out of tough connective tissue, resulting in its relatively constant ‘coffee bean shape’. From the capsule, so-called trabeculae run through the inside of the spleen; they form a supporting framework and divide the spleen into segments. 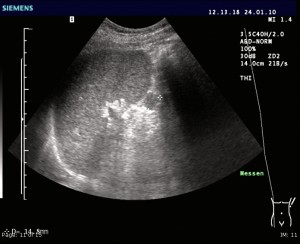 The histological structure corresponds to that of the main spleen. In principle, the presence of an accessory spleen does not represent any health risks. If, however, the main spleen has to be removed in a splenectomy, the accessory spleen is too small and too remote from the splenic artery to take over its functions—which would mean that the desired treatment effect (e.g., trapping of old RBCs and WBCs) cannot be achieved.

The spleen is one of the secondary lymphatic organs and can be described as the central organ of the immune system. Furthermore, it filters the blood and removes old or damaged red blood cells (RBCs).

In the macroscopic view of a transected spleen, a division of the parenchyma into white and red areas, the white and red pulp, becomes apparent. The different coloring is due to the different tissue composition: In the white pulp, there are mainly splenic corpuscles and lymphoid sheaths, while the red pulp consists of numerous erythrocytes located in the splenic sinusoids. 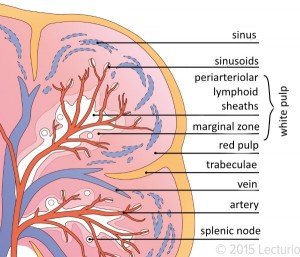 Image: Section of the spleen – labeled diagram. By Lecturio

The white pulp contains lymphocytes, which is why it belongs to the lymphatic tissue. T cells surround the central arteries like a cuff, forming the peri-arteriolar lymphoid sheath (PALS). PALS is an important histological characteristic of the spleen that distinguishes it from other lymphatic organs— and which makes it a frequently tested exam topic. B cells are mostly found in the splenic (Malpighian) corpuscles.

If the spleen is depleting too much blood, it can cause hemolytic jaundice. Because of the increased breakdown of hemoglobin (red pigment of the erythrocytes), more bilirubin is produced from the heme, which gives the skin a yellowish color.

Splenomegaly is massive enlargement of the spleen, which makes the spleen palpable under the left costal arch. Ultrasounds show a bulging shape and rounding of the normally pointy poles. Any ectopic tissue such as accessory spleens would also be hypertrophied.

The absence of a spleen implies the lack of a filtration function for bacteria, especially for encapsulated bacteria (pneumococci, meningococci, and Hemophilus influenzae type B). The result is a lifelong increased risk of sepsis. Physicians dread the OPSI syndrome (overwhelming post-splenectomy infection) which can, within a few hours, lead to septicemia, caused by pathogenic bacteria getting into the bloodstream, which can result in severe general symptoms and eventually lead to death.

Prophylactic vaccination against the mentioned bacteria is therefore advisable for asplenic patients and should be repeated every 5 years. Also, annual vaccination against influenza is important for prophylaxis. If fever or chills should suddenly set in, early use of antibiotics is indicated. Asplenic patients must receive an emergency card from their doctor so that 1st responders or other doctors may be informed about the immune disorder. 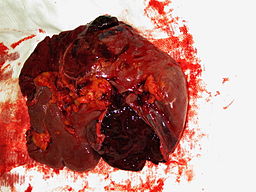 The most common reason for a rupture of the spleen is a blunt abdominal trauma; for individuals with splenomegaly, a minimal trauma is already enough to cause a rupture of the capsule. The distinction is made between an early or delayed rupture. In an early rupture, the splenic capsule and parenchyma are both ruptured at the same time, which leads to immediate bleeding into the abdominal cavity.

Please note: In case of blunt abdominal trauma, the possibility of a splenic rupture should always be considered and ruled out, as covert bleeding can be life-threatening!

Because of the possible severe consequences, a splenectomy can have, the goal of surgery should be the preservation of the spleen (especially in children) or at least the (difficult) partial resection.

Total splenectomy, in turn, is relatively easy because it only requires the dissection of the splenic artery and vein at the hilum of the spleen. Accesses to the spleen are: laparoscopic, left subcostal incision, or laparotomy with the upper midline incision.

The spleen is an important but not a vital organ as its functions can be compensated by other organs. For instance, immune responses by other lymphatic organs or RBC breakdown by the liver.