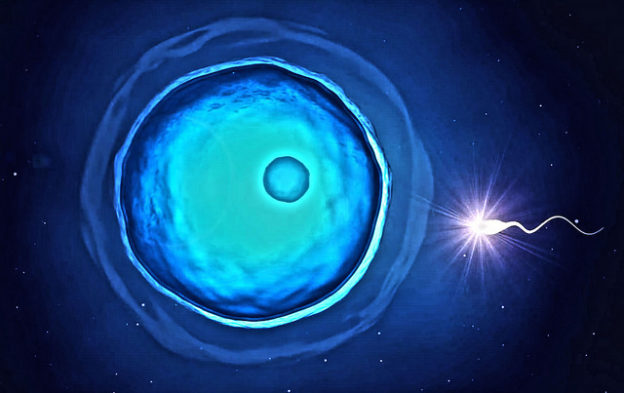 At the beginning of embryonic development, the primordial germ cells lie along the wall of the yolk sac. In the 4th week, they pass the hindgut to reach the differentiating gonads. These cells are referred to as oogonia or spermatogonia if they develop into ovaries or testicles, respectively.

Oogenesis starts in the fetal period but then pauses. It is continued during puberty at the age of 12–15 years.

During this time, the primary oocytes or oocytes of the first order develop. For this, the oogonia proliferate via mitosis. They exhibit some growth. However, the prophase of meiosis is not completed. The cells halt in the diplotene of prophase and still have a diploid set of chromosomes. Due to the net-like appearance, this idle state is referred to as dictyotene.

The primary oocytes are surrounded by follicular epithelial cells, which develop from the decaying sex cords and form a flat, single-layer cover around the oocytes. This complex is called the primordial follicle. Roughly 7 million egg cells are created until the 6th month. Until birth, about 5 million of them die. After birth, no more primary oocytes can be created. 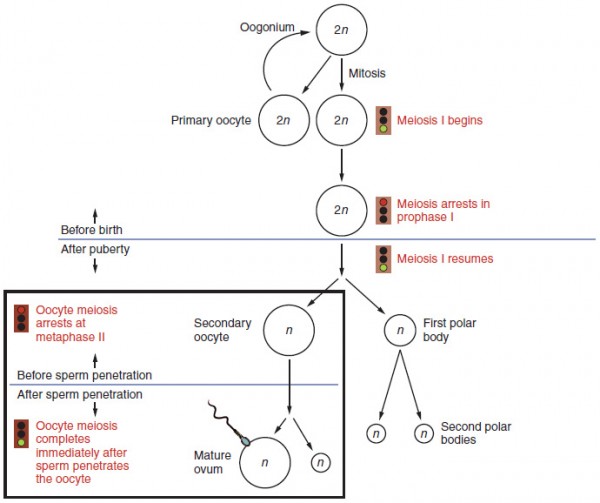 Only some of these primary follicles develop further. They become secondary follicles with a multilayer cover formed from follicular epithelium cells. They produce a substance out of glycoproteins, which surrounds the egg cell as the zona pellucida. The oocyte grows larger and adopts an eccentric position. Cavities form and fuse to form a large one, the antrum, which is filled with follicular fluid. Thus, a tertiary follicle is formed.

In the tertiary follicle, the oocyte, which protrudes into the follicular cavity surrounded by the zona pellucida, then builds the cumulus oophorus. A layer of granulosa cells is in direct contact with the zona pellucida, which is referred to as corona radiata since it is serrated. The tissue of the ovary differentiates into the theca interna, which is rich in vessels and produces androgens, and the theca externa, which stabilizes the follicle and consists of connective tissue.

Under the influence of follicle-stimulating hormone (FSH), only one of the tertiary follicles becomes the Graafian follicle every month. This happens about 7 days before ovulation. This Graafian follicle has a diameter of 1.5–2.5 cm and can be seen as the stigma from the outside of the ovary. It is the egg cell, which will eventually ovulate. 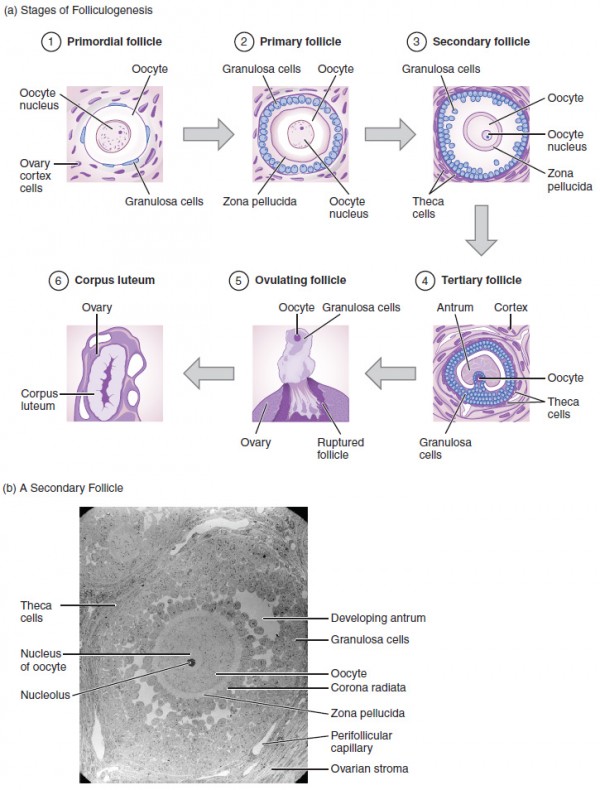 Roughly 12 hours before ovulation, the first meiotic division is completed in the Graafian follicle. In the course of this process, the first polar body with one set of chromosomes is pinched off. The other set stays within the egg cell, which is now called the secondary oocyte or oocyte of the second order. It contains the major part of the cytoplasm and cell organelles so that the polar body is significantly smaller and quickly degenerates. The nucleus of the egg cell is still diploid.

On the 14th day of the female menstrual cycle, ovulation occurs. The egg cell ovulates with the zona pellucida and the corona radiata. This means that it leaves the ovary and is then caught by the fimbriae of the fallopian tube. Simultaneously, the second meiotic division begins. It also halts, but this time in the metaphase. It continues if the egg cell is fertilized.

If the egg cell is fertilized, the second meiotic division is continued. Again, a secondary polar body is pinched off, which contains a minimal amount of cytoplasm. It remains in the fertilized oocyte, the ovum. The nucleus now contains a haploid set of chromosomes, which can fuse with the chromosomes of the sperm.

Since the egg cell ovulates with the zona pellucida and corona radiata, the rest of the follicle remains in the ovary. It collapses and is filled with the blood of the theca interna. Thus, it is called corpus hemorrhagicum at this moment. Under the influence of luteinizing hormone (LH) from lutein cells, it becomes the yellowish corpus luteum. The yellowish coloration is due to the embedded lipids of the lutein cells. The corpus luteum produces progesterone and some estrogen, which leads to changes in the endometrium. This is the buildup of the uterine mucosa as preparation for possible implantation of the egg cell.

If the egg cell is not fertilized, the corpus luteum stops secreting progesterone and decays, disintegrating after only 10 days. In both cases, white scar tissue remains, which is the corpus albicans. This process repeats as the ovarian cycle until the eventual absence of menstruation (menopause).

In contrast to oogenesis, male germ cells are able not only to develop before birth but also to replicate after birth.

Prenatally, Sertoli cells stop the male germ cells in their maturation process after their immigration into the testicle. As mainly undifferentiated cells, they remain in the testicle whose tubules are not yet canalized. With the onset of puberty, the seminiferous tubules develop and the maturation of the spermatogonia to sperms begins. 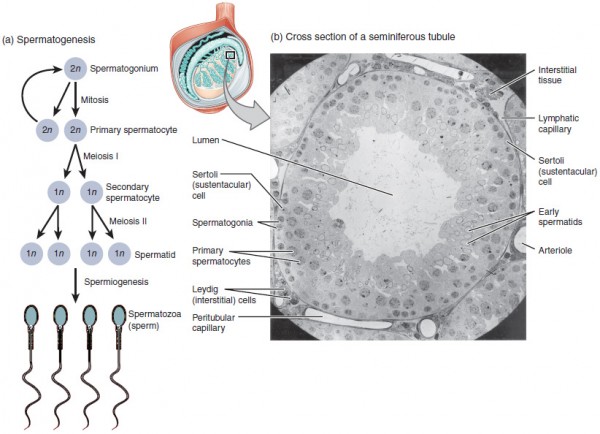 Image: Structure of Sperm. By Phil Schatz, License: CC BY 4.0

The following process is called spermiogenesis. It is the last step of spermatogenesis and makes the spermatids become functional sperms. The secondary spermatocytes are connected to each other via bridges of cytoplasm since both the first and second meiotic divisions are performed with an incomplete diakinesis. Now 4 separated mature sperms develop.

Firstly, the organelles and the excess cytoplasm are pinched off in residual bodies and the tail of the sperm is formed. This process begins in the seminiferous tubules and continues all the way to the epididymis. This is where the final maturation takes place. The result is a functional sperm with a head, neck, and tail.

The head of the sperm contains the nucleus and is covered with the acrosome. The neck part follows, it contains the proximal centriole, which is important for the fertilization of the egg cell. The last part of the sperm is the tail, which is divided into 3 parts:

The middle piece contains mitochondria. It provides energy for the movement of the flagellum via ATP. The flagellum consists of the main and end pieces of the tail and contains microtubules, which have a typical 9×2+2 structure, which means that they are arranged in pairs. Until liberation, the sperms are stored in the epididymal duct. The complete process of maturation lasts about 80 days.

However, the sperms have to undergo a final maturation. After ejaculation, conditioning or capacitation takes place, which takes roughly 7 hours. During this process, the membrane components change, but not the sperm’s morphology. Mostly, this happens in the fallopian tube and is essential for fertilization as the acrosome reaction cannot be performed without the conditioning of the sperms.

Pathological processes during spermatogenesis and oogenesis are primarily relevant at the chromosomal level. An example of disturbed gametogenesis is non-disjunction, the incorrect segregation of chromosomes into gametes. It can occur in the course of the first and second meiotic divisions and leads to gametes with too many or too few chromosomes. Only a few of these incorrect segregations are consistent with postnatal life. 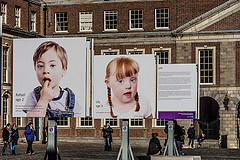 A typical example of meiotic non-disjunction is trisomy 21 or Down syndrome. In this case, all or part of a third copy of 3 chromosomes 21 are present and it only rarely occurs via translocation. The clinical picture is mainly shaped by the characteristic face and Simian crease. Patients with trisomy 13 and 18 are also capable of surviving. These chromosomal abnormalities can be caused by non-disjunction.

If nondisjunction occurs in one of the blastomeres after fertilization, it is possible that only a few cells carry this chromosomal abnormality, which results in a mosaic. This formation of a mosaic can also occur in the mentioned trisomies and the Klinefelter and Turner syndromes. In this case, the clinical changes are less distinctive compared to the case where all cells carry the abnormality.

Image: X-ray image of the legs of a 10-year-old boy with achondroplasia. By Kinderradiologie Olgahospital Klinikum Stuttgart, License: CC BY-SA 3.0

Moreover, age plays a role in men. Although no abnormal chromosomal segregations show with increasing paternal age, higher rates of new mutations occur. This is due to the constant DNA replication in the sperms. Thus, the DNA of a 40-year-old man has been replicated 610 times. With higher rates of replication, the risk of an error (new mutation) in the replication process rises. Connections can be made to achondroplasia or Marfan syndrome.