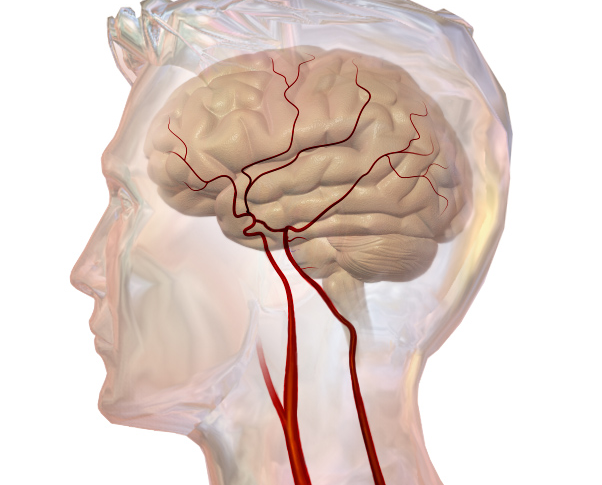 The coronary arteries are autoregulated. When they are fully patent, they adjust the supply of blood according to myocardial demand. These, however, are the end arteries, the only source of oxygen and nutrients to the heart muscles. 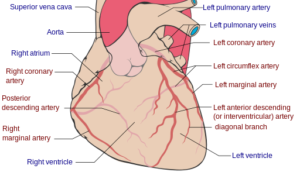 Two coronary arteries arise from the root of the aorta, just before it exits the left ventricle.

The aorta has three sinuses:

However, in some people, the two arteries may emerge as one trunk, or there is an extra third branch, known as the posterior coronary artery. The arteries that remain on the surface of the heart and follow the sulci are called epicardial coronary arteries, as shown in the figures.

The left coronary artery supplies blood to the left atrium, left ventricle, and interventricular septum. It gives off two main branches as follows:

The left circumflex artery follows the coronary sulcus pathway on the left side of the heart. It then fuses with the branches of the right coronary artery. 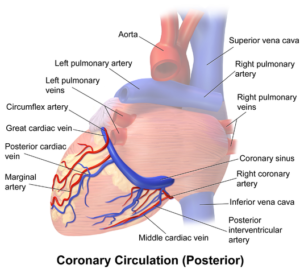 The right coronary artery supplies blood to the right atrium, right ventricle, the conductive system of the heart, and a portion of the left ventricle. It gives off the following branches:

The anastomosis occurring in the coronary circulation is referred to as an anatomical anastomosis. These arteries do not supply blood efficiently if one of them is blocked by an atheroma. The three anastomoses are:

The great cardiac vein receives tributaries from the left atrium and both ventricles. It begins at the apex and ascends along the anterior longitudinal sulcus.

The middle cardiac vein also begins at the apex of the heart and ascends in the posterior longitudinal sulcus.

The anterior cardiac vein drains blood from the right ventricle and opens into the right atrium.

The small cardiac vein drains blood from the posterior portion of the right atrium and ventricle.

All the cardiac veins except the anterior cardiac vein drain into coronary sinus as shown in the figures.

When the coronary arteries develop an atheroma in them, it leads to the decreased blood supply to the cardiac muscles. In such cases, when the oxygen demand exceeds the supply, it results in left-sided chest pain called angina. If the coronary artery is completely blocked, the area of the heart supplied by that particular artery undergoes infarction, often referred to as myocardial infarction or heart attack in layperson language. These lesions can be visualized in echocardiography or deduced from electrocardiography findings.

The effect of ventricular contraction of Coronary Blood Flow is that the contracting myocytes collapse vessels. Arterial blood is forced backward toward aorta. During contraction, there is reduced blood flow, but during relaxation, there is engorgement, increasing coronary blood flow.

Cerebral circulation refers to the vessels supplying the brain. The brain receives approximately 750 ml of blood each minute, which is 15% of the cardiac output.

The arterial supply of the brain is divided into two categories:

The anterior cerebral circulation supplies blood to the anterior portion of the brain. It comprises of the following arteries: 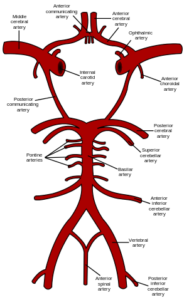 Image: “Schematic representation of the circle of Willis, arteries of the brain, and brain stem.” by Rhcastilhos – Gray519.png, License: Public Domain

The anterior communicating artery connects the two anterior cerebral arteries as shown in the diagram.

The basilar artery supplies the midbrain and the cerebellum. It has the following branches:

Venous drainage of the brain

The venous drainage of the brain consists of a superficial system of dural sinuses lying between the periosteum and the meningeal layer of the dura mater. The deep system consists of traditional veins inside the deep structures of the brain. 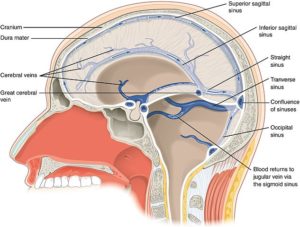 The dural venous sinuses are valve-less vessels which ultimately drain into the internal jugular vein. The inferior sagittal sinus and the great cerebral vein unite to form the straight sinus.

The superior sagittal sinus, the straight sinus, the transverse sinus, and the occipital sinus converge at the confluence of sinuses as shown in the figure to the right.

The sigmoid sinus is a continuation of the transverse sinus and drains into the internal jugular vein.

The cavernous sinus is found on either side of the sella turcica. It drains the blood from the ophthalmic veins, as shown in the figure below. The blood then drains into the internal jugular vein via the superior and inferior petrosal sinuses. 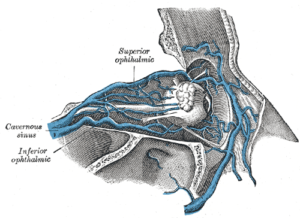 The veins of the brain lie within the brain structures. They are further categorized into a superficial and deep system.

The superficial venous system consists of:

The deep venous system consists of: 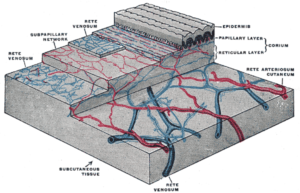 The needs of the skin are minimal; as such, the blood supply is mainly via arteriovenous anastomosis as opposed to supplying by arterioles. The epidermis of the skin does not contain any arterioles or arteries to supply blood. Nutrients and waste products travel through simple diffusion from the underlying skin layers. The dermis consists of two regions – the papillary region and the reticular region.

The papillary region is the superficial layer composed of areolar connective tissues. As the name suggests, it consists of papillary projections into the epidermis that contain a network of blood capillaries.

The reticular region lies deeper in the papillary region and is composed of dense connective tissues made up of collagen, elastin, and reticular fibers. This layer is comparatively thicker than the papillary layer.

The network of capillaries in the papillary region is derived from the arteries of the reticular region. Similarly, these arteries drain into veins present in the deeper layer. The arteries are called rete arteriosum and the veins are called rete venosum. The skin’s blood supply is shown in the figure below.

The skin is a thermoregulatory organ, so its blood supply depends largely upon the internal body temperature and the external environment. For instance, if the external temperature is low, the brain sends sympathetic signals to the skin vessels. This causes vasoconstriction of the arterioles to prevent blood flow to the superficial layers of skin and to preserve heat loss.

Similarly, if the external temperature is high, the arterioles of the skin are dilated. This is to allow more blood flow to the superficial layers of the skin and allow the loss of heat via the skin.