Image: “From DNA to Life” by Dodo. License: Public Domain

The complete set of the genetic material of an organism is called a genome. A genome consists of DNA (or RNA for RNA viruses) which includes the genes (coding region), non-coding DNA, and DNA (or RNA) of mitochondria as well.

The term genome was coined in 1920 by Hans Winkler. This term is a combination of genes and chromosomes.

Inside the nucleus of a human cell are 23 pairs of chromosomes containing DNA strands. Each arm DNA consists of four nucleotide bases (adenine (A), thymine (T), guanine (G) and cytosine (C)) which are arranged in a specific sequence that determines the genes.

A genome contains all the necessary information that is needed by an organism to produce, maintain, and reproduce. Each genome in the human body contains more than 3 million DNA base pairs, and all of this fits inside the microscopic nucleus of every cell.

Number of Genes and Complexity

Genes can be located on a DNA strand by searching for start codon, stop codon, and open reading frame (ORF) which is the region between the start and stop codon.

Sequence inspection is usually the first method for analyzing gene sequence. It is not a foolproof method of analysis but, undoubtedly, a useful tool for locating genes.

ORF begins with a start codon, which has the sequence of nucleotide base as ATG and finishes at end codon consisting of a TAG, TAA or TGA. Each strand of DNA has three reading frames in one direction and three on the other strand in the opposite direction; thus, both the strands will have six reading frames.

Alternative splicing is a regulated method during gene expression that results in the formation of multiple proteins from a single gene. This involves inclusion or exclusion of a particular exon from the final mRNA, and results in the formation of a variety of proteins with different amino acid sequence and different functions. Thus, even if the number of genes in an organism is less, the room for complexity may largely be increased due to alternative splicing of mRNA.

Five modes of alternative splicing are:

The method of determining the exact order of nucleotide bases in a DNA is called DNA sequencing.

The types of DNA sequences include:

These are the regions of DNA that code for proteins.

They are transcribed to form RNA which is translated to form proteins.

They are long DNA sequences and are almost identical (90% – 100%) in sequence. They are present in multiple locations because of duplicating events. Can be tandem or interspersed and interchromosomal or intrachromosomal.

It includes a group of genes from the same organism that forms proteins with a similar order either over the full length of the gene sequence or over a partial domain. DNA duplication can form gene pairs, and a multigene family will form if both copies in subsequent generations exist. Genes that encode for hemoglobin, actins, interferon, histones, etc. are examples of multigene families.

Tandem genes are present within the segment of DNA that is repeated a number of times from head to tail. Cluster genes are connected by non-conserved DNA, but irregularly spaced and inverted unpredictably.

These are the regions of DNA that do not code for proteins.

It is a nucleotide sequence of a gene in DNA or RNA that is not included and spliced out during the final formation of mRNA and does not code for protein formation.

They are genes that do not code for proteins due to mutations like frameshift or premature stop codons.

Also called transposons or jumping genes, they are the sequence of genes on DNA that move from one place to another within a genome. They can be duplicated or excised and inserted elsewhere. They include Long Interspersed Elements LINEs (21%), Short Interspersed Elements SINEs (13%), Long Terminal repeats LTRs (8%) and Dead Transposons (3%).

These elements move from one location to another; they may be:

If excised, these elements are inserted somewhere else.

1. Dead transposons: This 3% of the genome has no machinery to move.

4. Long interspersed elements (LINEs): They make up to 21% of the human genome. LINEs can transpose themselves.

The remaining 55% makes the non-coding and coding DNA in the human genome. 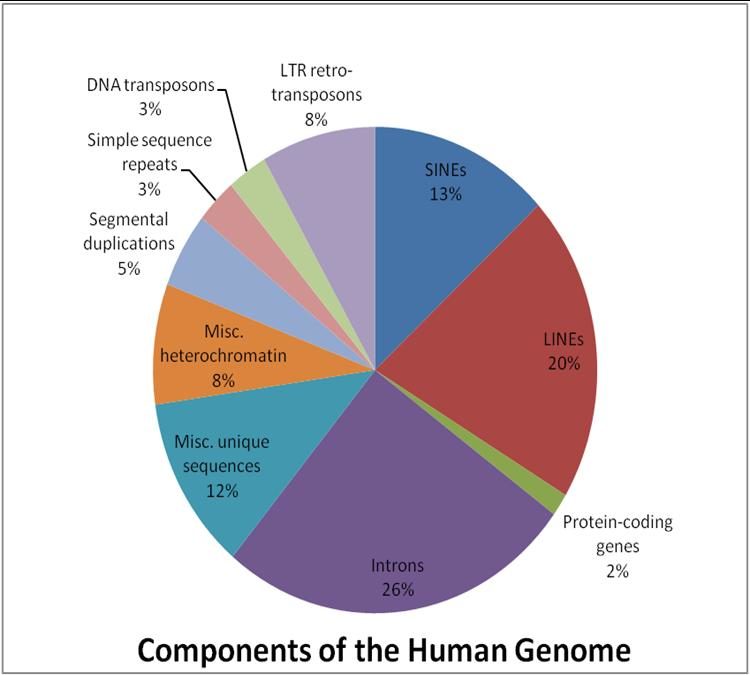 Image: “This figure illustrates the proportion of various genomic components within the human genome.” by Alglascock. License: CC BY-SA 3.0

Single nucleotide polymorphism (SNP) is the most common type of DNA sequence variation that occurs when a single nucleotide (A, T, G, or C) varies between members of a species or even between paired chromosomes within a person. These changes may be responsible for diversity among people and some common familial traits like diabetes, hypertension, curly hair, drug response, etc.

SNPs are used to tag genotypes. Known SNPs have been mapped onto genome sequences.

SNPs are found in human DNA. They occur in every 300 nucleotides. They play an important role as biological markers to locate genes in diseased condition and by directly affecting the gene’s function. According to recent research works, SNPs may contribute to judging the individual response to certain drugs, and certain environmental factors such as toxins and risk of developing the disease. It can track the inheritance of disease genes in families.

This gene instructs the formation of tumor suppressor protein which helps prevent cells from uncontrollable growth and multiplication. This protein is also involved in repairing the damage caused by factors like radiation or some environmental exposures; thus, this protein (and, hence, the gene) aims at maintaining and preserving the genetic information.

The EST is a part of the cDNA sequence in the form of a short sub-sequence. In gene-sequence determination and gene discovery, Expressed Sequence Tag is instrumental. These are also used for the identification of gene transcripts.

In genetics, EST helps determine which pieces of the genome are expressed.

A microarray contains cataloged genes from an entire genome. They can tell when a gene is expressed.