Ways of Communication in Cell Signaling 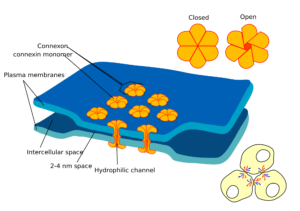 Image: “Gap junctions” by Mariana Ruiz LadyofHats – the diagram I made myself using the information on this websites as source: [1], [2], [3], and[4]. Made with Adobe Illustrator. Image renamed from File: Gap cell junction.svg. License: Public Domain

This is the process of cytoplasmic communication between two cells, without involvement of extracellular fluid. The connexin proteins form a cylindrical structure between the lateral surfaces of two adjacent cells. This cylindrical structure with pore is called the connexon. Connexons can open or close in response to certain signals.

The cell membrane has specific proteins present on its surface. These proteins have a three-dimensional structure, which gives them a unique binding site. They are known as cell surface receptors and are only complementary in shape to certain molecules called ligands. When a ligand binds to its cell surface protein, a response is produced.

Modes of Communication Between Cells

Cells communicate with each other by means of secretion of many kinds of molecules called signal molecules and cells secreting them are called signal cells. These molecules may be proteins fatty acids, amino acids, peptides, and even gases. These molecules reach extracellular space by different methods like exocytosis, diffusion or may remain bound to the cell membrane of the target cell but are exposed to extracellular space. Target cell (receptor cells) respond to signal molecule, a ligand, by means of a special protein called a receptor that binds to the signal molecule and initiates biomolecular processes within the cell. The signal molecules can act either over long distances or short distances.

Cells adopt one of the following modes of communication with each other:

Endocrine signals, released by the endocrine glands, are chemical substances called hormones. Hormones travel through the blood to distant target organs, which contain specific receptors for that particular hormone. The pancreas, an endocrine gland, releases the hormone insulin. It travels through the blood and finds its receptors on specific cells such as skeletal muscle cells or liver cells.

Paracrine signals are given off by one cell to its surrounding cells. For example, the neurons release neurotransmitters, which act on the neighboring neurons. A signal is therefore transmitted from one neuron to another. For paracrine signals to be delivered to the specific target cells they are prevented to travel far away as they are destroyed by extracellular enzymes or engulfed by the neighboring target cells.

Autocrine signals are produced by the target cells and act on the cell itself through cell surface receptors. An example is the B lymphocyte, which sends signals to itself for cellular proliferation. Community effect in cell differentiation in early life is also thought to be the example of autocrine signals. Cancer cells also use the mechanism of autocrine signaling.

Intracrine signaling refers to the production of signals which act intracellularly. For example, the fibroblast growth factor acts on the same cell, without being released as in the case of autocrine signals.

Juxtacrine signals also called contact-dependent signals, are the ones transmitted from one cell to its adjacent cell. Immune cells are known to observe the juxtacrine mechanism of signal transmission.

There are different types of receptors, which produce a specific type of response. They are broadly classified into the following types: 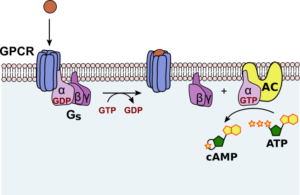 G-protein-coupled receptors activate a G protein when the ligand binds to the receptor. The G protein, in return, activates an effector protein to generate a second messenger inside the cell as shown in the image to the right. Examples include epinephrine, glucagon, and insulin.

Cytosolic receptors are present inside the cell. Lipid soluble molecules diffuse into the cell and bind with receptors in the cytoplasm. They then move inside the nucleus and initiate transcription of proteins. The new proteins formed to alter the cell function. 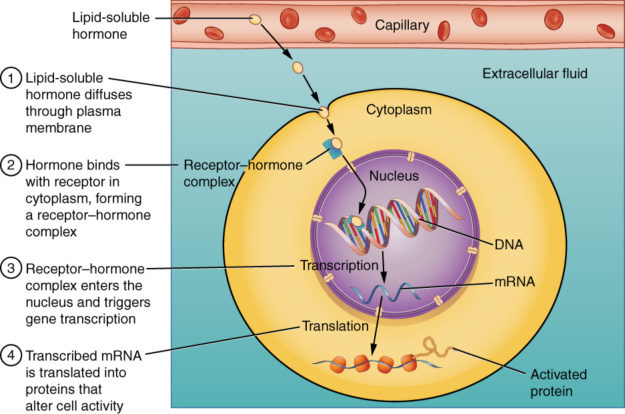 Receptors may undergo the following modifications: 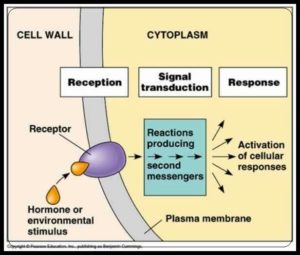 Cell signaling comprises of many stages: