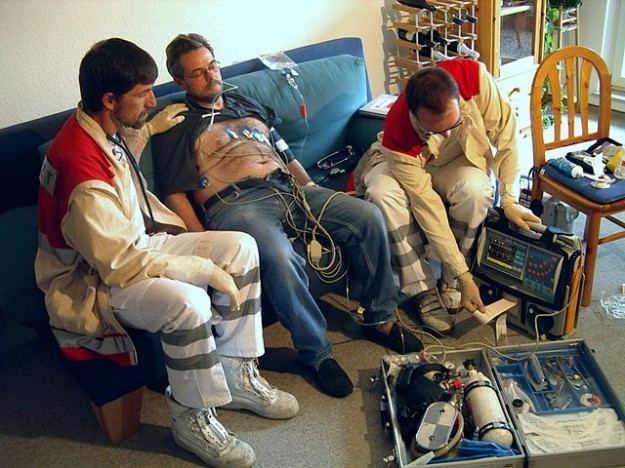 Image: “Treatment of emergency patients by a rescue team of Malteser“ by Nallchen. License: (CC BY-SA 3.0)

The life-threatening state of shock

The relevant parameters that characterize the clinical picture of shock are arterial blood pressure, with a systolic pressure below 90 mm Hg or significantly lower than the baseline value. Moreover, an increased heart rate can be observed in most cases. The pulse is fast and thread-like. Thread-like describes a pulse that is weak, filled, quickened, difficult to palpate, and easy to suppress. The cardiac output can be decreased significantly. Furthermore, changes in the state of consciousness can be observed. Additional symptoms are as follows:

Types of Shocks and their Development 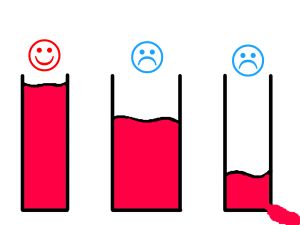 Shock is a condition with inadequate perfusion of tissue. This means that there is insufficient oxygen transport and a disturbed removal of metabolic degradation products.

There are different types of shock. However, treatment always starts with a diagnosis, which must be made fast and is, therefore, a major challenge for preclinical and medical care. There is a risk of multiple organ failure, yet other causes for signs of shock have to be considered within the scope of differential diagnoses.

Definition and etiology of anaphylactic shock

Anaphylaxis is an acute and systemic reaction that is characterized by symptoms of an allergic shock. Its course can be life threatening. Anaphylactic shock is among the most severe allergic reactions of the body.

There is no standardized definition that is used globally. In Germany, anaphylactic shock refers to an acute, pathologic reaction of the immune system in response to a chemical stimulus, which affects the whole organism. Shocks like this can occur in humans and animals. 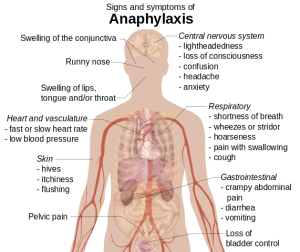 There are different triggers for anaphylactic shock that can hardly be determined at first glance. Additionally, triggers can also be hidden in foodstuff, which can lead to a dangerous delay of their identification, especially if rare triggers are involved.

Medications and food are identified particularly frequently as triggers, with nuts, seafood, and celery being the most common among foods. Further possible triggers are chicken eggs and insect poisons.

Anaphylactic shock can occur in four degrees of severity.

The patient feels light reactions that can be accompanied by dizziness and headache. Skin reactions are possible as well. This includes itching, skin redness with sensible heating of the skin, and nettle rash (generalized urticaria). This condition is not life threatening. However, it requires clarification. Prominent features are conjunctivitis and rhinitis as well as general restlessness.

Second-degree shock includes symptoms of the first-degree form. Additionally, further signs such as tachycardia and dyspnea can be observed. Vomiting and nausea are also possible. Furthermore, the urge to defecate arises. The patient complains about dizziness.

Symptoms of the first and second degrees are present. Characteristics of the third degree are bronchospasms with clear dyspnea; hoarseness, drowsiness, and fear are also visible. Quincke’s edema may occur, which can cause laryngeal swelling (Quincke’s edema—see below).

Edema can occur due to anaphylactic shock. However, edema can also have a completely different trigger. Edema is classified according to their localization. They can be generalized (symmetric), localized (on one or both sides). They can also be located peripherally.

Peripheral edema is located, for example, inside the ankles but also in the lower leg. Bedridden patients can also have sacral edema.

A different classification considers the results of palpation. Pitting edema gives way when palpated, whereas non-pitting edema does not give way. Consistency, which means whether the edema is soft or hardened, is also of importance.

Quincke’s edema, also called angioedema, occurs acutely and can last up to 3 days. It is a swelling found especially in the face (lips and eyelids) but also the hands, feet, and genital area can swell dramatically. Quincke’s edema becomes life threatening if the upper airways swell up.

Quincke’s edema can be caused genetically and is triggered by an enzyme deficiency. This is the case in the so-called hereditary angioedema, which is, however, very rare. Another trigger can be physical stimulation. Furthermore, Quincke’s edema can be an accompanying symptom of chronic infections as well as autoimmune diseases. There is also an idiopathic type, which refers to a form of Quincke’s edema with an uncertain cause.

Reinke’s edema is a disease of the vocal folds due to the collection of tissue fluid. It can occur unilaterally, bilaterally, or even affect the entire vocal folds. The patient notices his voice becoming lower or ‘tilting’. Talking over extended periods becomes difficult. Hoarseness can be an accompanying symptom.

Reinke’s edema is treated with sprays containing cortisone to reduce the swelling. Chemical fumes and other noxious influences such as smoking, which are usually the cause for Reinke’s edema, should be avoided. In severe cases, surgery may be necessary.

Perifocal edema is located in healthy tissue surrounding the focus of disease. It occurs in the case of, for example, abscesses but also tumors and bleeding. It is also a possible complication after radiotherapy.

Right heart failure is a possible cause (cardiac edema). It may also be chronic venous insufficiency. Furthermore, endocrine diseases can lead to the formation of pretibial edema (myxedema) and it may also be possible to find the cause within the lymphatic system. A diagnosis is absolutely necessary because pretibial edema can be dangerous but also of harmless origin.

The reason for hemorrhagic shock is blood loss (hypovolemic shock), which is not necessarily visible. Possible causes are gastrointestinal bleeding, ruptures of vessels after accidents, gynecologic bleeding sources, and also tumors or chronic inflammation. Hemorrhagic shock is graded into four stages depending on the amount of blood loss.

Degrees and etiology of hemorrhagic shock

Hemorrhagic shock of first and second degrees are also referred to as compensated shock. From third degree upward, the shock is decompensated. As soon as the blood loss exceeds 50% the condition becomes life threatening. The patient is usually unconscious and the risk of circulatory collapse is likely.

Hypovolemic shock can also be a result of a loss of electrolytes, which can occur in cases of severe diarrhea. Possible reasons are severe burns as well as serious hyperthermia and insufficient intake of fluids, which, particularly among elderly people, is not uncommon.

Signs for improvements of the condition

Definition and etiology of cardiogenic shock

Cardiogenic shock is caused by a primary systolic failure of the heart. The skin turns pale but the cardiac output may be normal. The pulmonary capillary wedge pressure (PCWP) is increased. Arterio-venous O2 difference and total peripheral resistance (TPR) increase as well.

Reasons for cardiogenic shock can be either myocardial or mechanical. The myocardial reasons include myocardial infarction, myocarditis, cardiomyopathies, medication toxicity, and myocardial ischemia. The mechanical causes include pulmonary embolisms, artificial valve dysfunctions or diseases of the heart valves but also pericardial tamponade, intracavitary disturbances of fluid movement, or pericarditis constructiva.

Symptoms and diagnosis of cardiogenic shock

The patient is confused or has another form of disturbed consciousness. The mortality rate remains high, even if the patient is hospitalized. The blood pressure can be normal. The visible symptoms are moist and cold skin, cyanosis, tachycardia, and oliguria. Cardiogenic shock is known as the most frequent cause of death in cases of acute myocardial infarction.

Note: Up to 80% of all cardiogenic shock cases are triggered by acute myocardial ischemia.

The accuracy of a cardiogenic shock diagnosis can be clarified using echocardiography and right heart catheters. In cases of circulatory–obstructive shock, which occurs due to a pulmonary embolism, a massive right ventricular load and a simultaneously good left ventricular contractility can be observed.