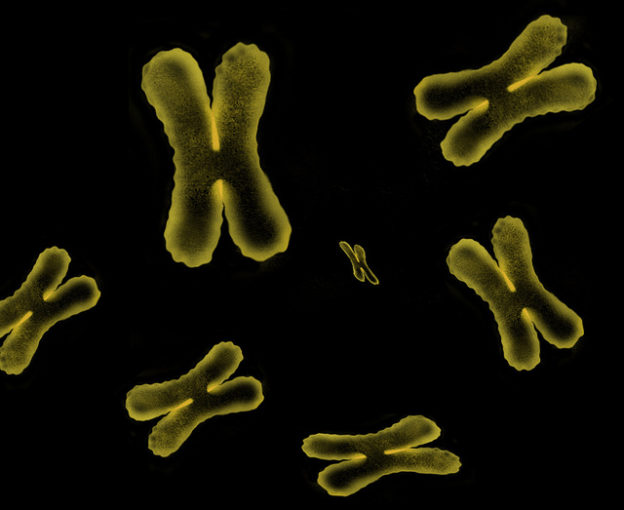 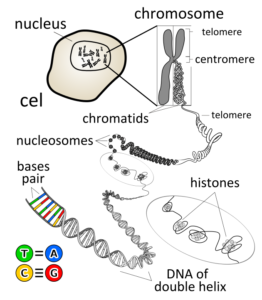 Image: “Graphic decomposition of a chromosome (found in the cell nucleus), to the bases pair of the DNA” by KES47. License: CC BY 3.0 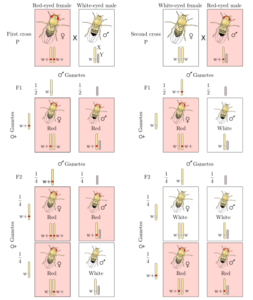 Morgan’s experiment with fruit flies is verification of chromosome theory. A mutation in the gene coding for the color of the eye in a fruit fly causes the white color of the eye, instead of the normal red color.

The eye color gene in fruit flies is located on the X chromosome.

During his experiment, Morgan found that when a red-eyed female (wild-type) crosses with a white-eyed male, all offspring (F1) are red-eyed. When F1 flies are crossed with each other, all the F2 females are red-eyed, and half of the F2 males are white-eyed. This indicates that the white eye color gene inherits in the pattern of the X chromosome and is recessive; whereas, the red-eye color is a dominant trait.

All offspring inherit one X chromosome from the mother; therefore, the sex of a human being is always dependent on the type of sex chromosome they receive from the father. If it is a Y, the gender is a male, and if it is an X, gender is a female.

Y chromosome results in testes formation. If Y chromosome is absent, gonads would differentiate into ovaries.

Human genetic disorders can be sex-linked.

It is more prevalent in males compared to females because it is an X-linked recessive trait.

A cross between a carrier female and an affected male will result in the following:

It is an X-linked recessive disease in which the body’s ability to make blood clots is impaired. It results in prolonged bleeding after an injury and easy bruising of the skin.
Since females have two X chromosomes, they do not suffer unless both chromosomes carry the mutation. A cross between an affected father and carrier female would result in:

This is a rare X-linked recessive disease and one of the most frequent genetic conditions affecting muscles.

The disease affects every 1 in 3,500 males born all over the world. The disease mainly manifests in the age of 3-6 years.

The disease arises from mutations of the DMD gene located on the X chromosome. This is the gene that regulates production dystrophin, a protein found in association with the inner membrane of the membrane of skeletal and cardiac muscle cells.

Patients with this disease experience weak muscles and atrophy of the muscles of the pelvic area and shoulder region due to a lack of sarcolemma function in the myocytes of these muscles. The disease may progress to involve other parts of the body.

They include cardiomyopathies and respiratory distress due to the involvement of respiratory muscles.

It is a dental disorder in which there is a defect in the enamel formation. Resultantly, the teeth are small, discolored, pitted, and easily worn. AI is an X-linked dominant trait.

A cross between an affected female and unaffected male will result in:

A cross between an unaffected female and affected male will result in:

One of the X chromosomes gets inactive in female mammals through the process of X-inactivation. Men possess only one copy of the X chromosome, so this phenomenon actually prevents females from having double X chromosome gene products. The choice of X chromosome selected for silencing is random, and once this X chromosome is inactive, it remains so for the rest of the life on an organism. The inactivated chromosome has heterochromatin, a transcriptionally inactive structure, and becomes a bar body. 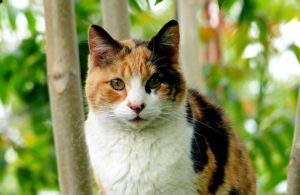 Tortoiseshell and Calico cats have a different color on their fur. This is a manifestation of X-inactivation. In these cats, the black and orange alleles which express fur color are located on X chromosomes. Orange and black fur have pigment, and white fur has no pigment in cats.

In an area where the fur is black, the allele for orange fur is inactive.

On the patch where fur is orange, the allele for black fur is inactive.

White fur, on the other hand, has no pigment.

Exceptions to a chromosomal theory

There are two exceptions to this theory.

Traits that are controlled by the genes outside the nucleus come under organelle inheritance. The genes expressing these traits are called extra-nuclear or cytoplasmic genes.

It is a uniparental inheritance. Mitochondria in a zygote from an egg cell does not come from sperm during fertilization. The expression of those genes contained in this mitochondria is therefore exclusive to maternal inheritance. Similarly, in plants, the chloroplast is often inherited from the mother.

Genomic imprinting is the genetic phenomenon in which only the non-imprinted allele from any one of the parent is expressed. The imprinted allele is silenced during the process, preventing it from expressing itself.

The process of imprinting is done using nuclear enzymatic mechanisms that maintain the parental epigenetic markings.

Specific changes in the following epigenetic factors can cause the genes to express differently in the form of certain diseases:

Epigenetic changes can cause a host of disorders. The following are examples of such disorders: